Lessons from the deep past

One of the greatest scientific challenges put forward by humankind has been trying to obtain at least a basic understanding on the anatomy, genetics, ecological and evolutionary relationships among all life forms on Earth. This is the almost unimaginable challenge of trying to understand the basic structure of life in our planet. Now, imagine trying to achieve such a task knowing that the current rate of species extinction worldwide is so high that considerable portions of that biodiversity will be gone by the end of this century. For this reason, taxonomists have started an incredible effort to at least identify and name as many species as possible before they go extinct. This has led to an exponential increase in the number of described species every year, at least for some groups of organisms. For instance, the number of described species of lizards and snakes (my favourite group of organisms) has grown from 6,000 to nearly 11,000 known species worldwide in just a few decades, with over 100 new species being described in some years. Yet, as much as 20% of all species of lizards in the world are predicted to go extinct by 2080, which would mean that thousands of species will go extinct taking today’s (highly underestimated) knowledge of species diversity.

The situation is not different with other groups of organisms. Imagine the impact of diversity loss in groups as rich as mollusks, with 85,000 species, or insects, with over 1 million described species. Considering the actual number of species is probably much greater than the number of described species, the potential for biodiversity loss skyrockets. It is quite likely that millions of different species of animals, plants and fungi will go entirely extinct before we can even catalog them. This current wave of extinction is often labelled as Earth’s sixth mass extinction. Of course, it is not until enough time has elapsed for enough species to go extinct (hundreds to thousands of years) that we will be able to “officially” label the current biodiversity crisis as the sixth major mass extinction. However, considering our big role in this current wave of extinction, humanity cannot morally or ethically afford to wait until such time to understand its consequences and take action.

The severe effect of the modern high extinction rates combined with our still relatively poor knowledge of the natural world will prevent us from assessing the full extent of the current crisis. Some of the long-term consequences of the present extinction event, such as what lineages are more likely to survive or the recovery rate for most ecosystems to re-establish pre-extinction levels of diversity and endemism will also not be known for centuries or millennia. Hence, knowledge from the fossil record can reveal important information on how different organisms were affected and recovered from past biodiversity crises. 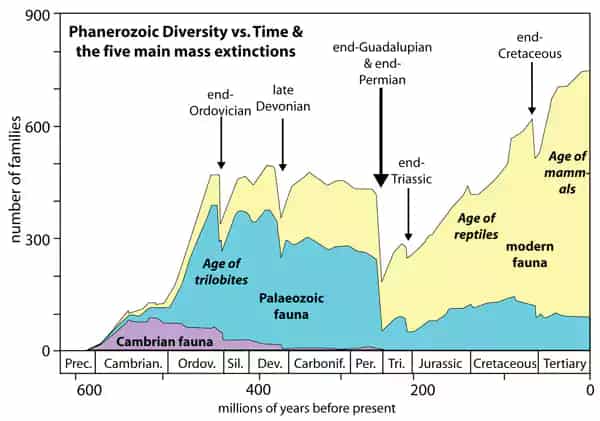 The current rate of global warming and species extinction only has parallels deep in the geological record. More specifically, with the previous five mass extinctions in Earth’s history (Fig. 1). Although those previous extinction events were triggered by distinct phenomena (as far as current theories ago), they seem to elicit similar long-term effects on biodiversity. This allows for important comparisons between biodiversity crises in the distant past to the modern extinction event.

Paleontologists have invested a considerable amount of work into trying to understand the taxonomic and ecological changes in both marine and terrestrial environments due to mass extinctions. With increasing amount of data, technical and methodological advances in data analysis, besides more precise dating of geological events at the time of the great mass extinctions of the past, an incredibly detailed picture of some of these events have come to light. My favourite comparison is with the Permian-Triassic mass extinction at 251 million years ago (MYA). Not only this is my current subject of research, but it has also important parallels with current climate change. For instance, both are marked by substantial input of CO2 into the atmosphere (at 251 MYA, released from hundreds of thousands of years of volcanic activities in what is today Siberia) and potentially aggravated by subsequent release of methane (at 251 MYA, from deep ocean sediments). Perhaps alarmingly, it is estimated that the rate of carbon input into the atmosphere at the end Permian was between 0.42 and 1.52 gigatons of carbon per year (Gt C/yr), although this is smaller than current levels of carbon input of 9 Gt C/yr. It is not to say that the current warming event is worse than the one that caused the greatest mass extinction in the history of complex life at 251 MYA (this rate would have to sustain for tens or hundreds of thousands of years for that to be true), but only that the current rate of carbon input into the atmosphere is alarmingly high compared to some of the most dramatic events in the geological record.

What examples can we take from the Permian-Triassic mass extinction regarding broad changes in world biodiversity? Recently, a more detailed picture of the total demise of biodiversity at that point in time has been emerging. As a result of the extinction, what used to be dominant faunas on land and seas were almost entirely replaced by new organisms more familiar to us. For instance, crinoids and brachiopods were among the most dominant animals at the bottom of the ocean until 251 MYA. After the extinction event, those organisms became considerably more restricted in diversity and were replaced by other life forms on the ocean floor, such as sea stars and sea urchins. On land, most of the large-bodied early synapsids (the early members of the lineage leading to mammals) were replaced by small-bodied reptiles that later in the Mesozoic evolved into dinosaurs, crocodiles, birds, lizards and snakes. In many ways, the evolutionary clock was reset at the Permian-Triassic border, with many important components of current life on Earth emerging on its aftermath. In a smaller scale, the same can be said about the Cretaceous-Palaeogene mass extinction (the one that “killed the dinosaurs”, or as it should be referred to, the one that killed non-avian dinosaurs). This extinction paved the way for a considerable expansion in mammalian and bird diversity and mammalian dominance among large-bodied terrestrial animals. Available evidence (mostly on marine invertebrates) indicates that, following the Permian-Triassic extinction, it took 7-10 millions of years for life to start re-establishing pre-extinction levels of diversity and occupation of ecological space.

A lot more can still be learned from past mass extinctions and their consequences to the history of life. Each year a more detailed picture is drawn based on the continuous finding of new evidence. But what seems to be clear is that when the world suffers a huge biodiversity loss in a short amount of (geological) time, it emerges in a quite different way. Life always recovers, but the dominant players are replaced by new ones after millions of years of instability across many different ecosystems. A lesson humankind does not have much time to learn.

I am a Postdoctoral Fellow in the Pierce Lab @ Dept. Organismic & Evolutionary Biology/Museum of Comparative Zoology, Harvard University. I work on the early evolution of squamates and on the phylogenetic relationships among squamates and other major reptile lineages. I started my career in my home city (Rio de Janeiro, Brazil), developing research on fossil reptiles at the Museu Nacional/UFRJ, and subsequently moved to Canada, where I obtained my PhD at the University of Alberta and expanded my expertise on phylogenetic methods, functional morphology and macroevolution. I am interested in combining data from living and extinct species, as well as morphological and molecular data, to explore and investigate deep time problems in vertebrate evolution.