The paper in Nature Ecology & Evolution is here: http://go.nature.com/2ySJcR6

Deer are weird (even if we disregard persistent reports that one particular species, the reindeer Rangifer tarandus, has a seasonal capacity for load-bearing flight). Roe deer, for example, practice delayed implantation – where the fertilized egg undergoes a few divisions and then waits, for several months, before implanting in the uterus. As a group, deer also have an unusually dynamic karyotype. Closely related deer species can have as few as 6 chromosomes or more than 70, with chromosomes breaking apart and fusing at a rate that makes karyotype evolution in other mammals look positively pedestrian.

Less well known but no less remarkable is the fact that many species of deer have sickle-shaped red blood cells. This is odd because, in almost all other mammals, from mice to whales to humans, red blood cells are of a similar size and have the familiar doughnut shape that helps them squeeze through small blood vessels and deliver oxygen to cells in need. What’s more, deer do not seem to suffer any ill effects from carrying these sickle cells in their blood stream. In contrast, humans with a sickle cell phenotype suffer from debilitating anaemia.

I learned about deer red blood cells entirely by accident. Flicking – as one does – through a 500-page monograph on blood crystals (Reichert and Brown 1909, if you must know), a hand-drawn figure (reproduced below) caught my attention and didn’t let go. It displayed the variability in sizes and shapes of vertebrate red blood cells. As you can see for yourself, most mammalian red blood cells are boringly uniform, with one exception: evolution seems to have gone a bit nuts in ruminants: tiny cells in chevrotains (a group of badger-sized mammals that look like a cross between a deer and a tapir), oval cells in camels, and – strikingly – sickle-shaped cells in white-tailed deer (Odocoileus virginianus, then known as Cervus mexicanus). 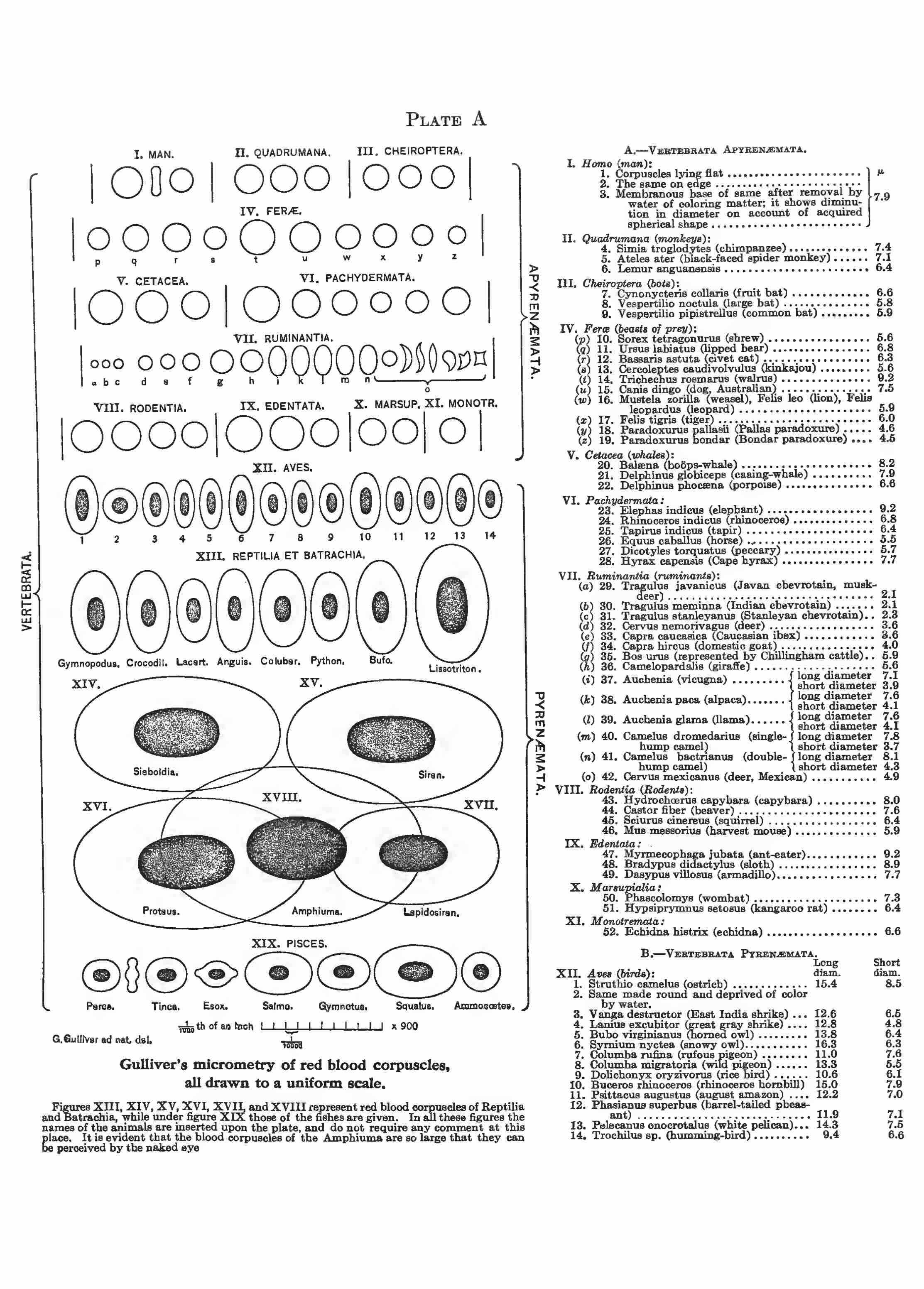 The man who made that drawing was former army surgeon George Gulliver. In the typical Victorian manner of a curious collector and collector of curiosities, Gulliver had measured countless red blood cells from any vertebrate he could get his hands on, with London Zoo his main hunting ground. He eventually published his observations in 1840, a whole 70 years before sickling was first described in humans. It then took a further few decades before the morphological similarities between human and deer sickle cells sparked a flurry of comparative studies. In the 1960s-80s, different groups showed that sickling in deer occurred in vivo and involved the same protein in both species: beta-globin, a key unit of the haemoglobin complex that binds, carries and releases oxygen. But the molecular basis of sickling in deer remained unknown. In humans, a single mutation changes the beta-globin protein and predisposes it to interact with other beta-globins, giving rise to haemoglobin fibres that end up so long and strong that they distort the shape of the cell. In deer, however, that particular mutation (a change of glutamic acid to valine at the sixth position of the protein, or E6V for short) had not been found and the genetic basis of sickling in deer remained unknown. As much as anything, this was probably a case of bad timing. Whereas decoding DNA sequences is routine today, this was not the case in the 1970s and 80s.

With the literature on deer sickling in hiatus from the mid-80s, I thought we could add something informative by sequencing the beta-globin gene in different species and comparing sequences from deer that sickled with those deer species where sickling had not been observed: the frosty triumvirate of moose, reindeer, and wapiti. I also thought that this would be a nice side project for my PhD student Alexander (Sasha) Esin, whose main project on horizontal gene transfer included a soul-destroying amount of reconstructing phylogenetic trees, where rewards can be rather intangible.

And so, we started collecting blood and tissue samples from various zoos and freezers around the UK, including the sizable one (freezer, not zoo) of Vincent Savolainen, a colleague at Imperial College, who had collected deer tongues* from species around the UK, including long-term natives and recent thriving escapees like Chinese water deer. Sasha then extracted DNA to hunt down the adult beta-globin gene. In the age of genomics, that sounds more trivial than it was. When we started, we did not have a single deer genome as a guide and globin genes are annoyingly prone to duplicate and recombine, leaving a host of closely related decoy sequences in the genome that we did not want to fish out. Thanks principally to Sasha’s persistence, we ended up with beta-globin sequences from 15 different species and could start looking at differences between sickling and non-sickling deer.

Then, as the sequences started to roll in, I went to Cambridge to ambush Joe Marsh. I felt that to really understand the relationship between genetic differences and sickling, we needed a structural perspective and I admired Joe’s work modelling protein-protein interactions. We had both signed up for a conference on Evolutionary Systems Biology and, in the splendid isolation that is the Wellcome Trust Genome Campus in Hinxton, Joe was a sitting duck and, fortunately, turned out to be game.

Together, we found that sickling does indeed have a different molecular basis in humans and deer. In a case of “close but not quite”, sickling deer also carry a mutation that changes a glutamic acid to a valine, but at a different site in the protein (E22V). Joe and his postdoc, Therese Bergendahl, used molecular modelling to show that this mutation is likely key for forming beta-globin fibres similar to those found in sickle cell patients. To our surprise, we also found that sheep - one of the few other species where sickling had been observed – carried neither the E22V nor the E6V mutation. Evolution appears to have converged independently on the same gross phenotype (sickling) and molecular phenotype (beta-globin polymerization) but via different mutational routes. Finally, and perhaps most intriguingly, we found some indication that sickling in deer is not just a random quirk that deer – unlike humans – just happen to tolerate. Looking at within-species genetic variation, we found evidence that both sickling and non-sickling versions of the gene are present in populations of white-tailed deer, fallow deer, and likely other species. Importantly, these alleles cluster together by whether they sickle or not (rather than by species), which suggests that the two alleles are old. In fact, we estimate that this allelic diversity has been maintained along different lineages since the ancestor of all deer, a scenario that is unlikely to happen by chance. Instead, we suggest that the two alleles have been maintained by balancing selection, and we are now working to figure out the ecological drivers that have kept the two alleles around for such a long time. Might it be that the parallels to humans extend even further? In humans, the sickling allele is surprisingly common in sub-Saharan Africa because individuals who carry one copy of the allele are less likely to succumb to malaria. Individuals with two copies, however, are severely sick, explaining why both alleles are maintained in the population. Might the situation be similar in deer? To find out, we have started to work with colleagues at the National Zoo in Washington, who have screened hundreds of white-tailed deer samples for the presence of Plasmodium parasites. This might well be a long shot, but then, wouldn’t it be fascinating if both deer and humans had evolved sickling to alleviate the effects of malaria?...

Like so often in science, this story started with a chance observation and has built on knowledge long pre-dating it. Yet it is still rare to reach back to a focal observation that is more than 150 years old. This study has certainly made me personally feel more connected to the historical, additive aspect of the scientific endeavour. More so than any other project I have been involved with thus far. Adding a piece to an older puzzle is perhaps as satisfying as contributing to a puzzle that’s large, or one that’s currently fashionable. Speaking of which, time to catch up with some epigenetics projects in the lab…

*Why tongues? Vincent assures me that the reason for collecting tongues is practical rather than morbid. It’s a part of the animal that’s easy to access and only present once. That’s a useful property when studying genetic diversity and relying on volunteer hunters to take samples for you. Labelling mistakes happen. But whereas two ears in your freezer might conceivably belong to the same individual, two tongues will most certainly not.