Bringing chronobiology into the wild

We revealed immense within- and between-species diversity in socially synchronized rhythms of parental care in the wild, and report on the drivers of this diversity. Here is the story of how this large scale comparative study on shorebirds came about.

Similar to humans, in most birds both parents care for their young. However, when I started a PhD with Bart in 2010, little was known about variability in timing of such parental care - that is little was known about how parents divide their duties - in the wild and across the whole breeding attempt. The only available detailed information was Bart’s unpublished data from Barrow, Alaska (now published [1]), which revealed that parents of the semipalmated sandpiper timed their nest attendance in a peculiar rhythm reminiscent of a “free-running” rhythm (Figure 1) observed when birds and other light receptive animals including humans are put under constant light or constant dark conditions.We were curious to find out whether such rhythm is the norm or one of many possibilities in this and other shorebird species. 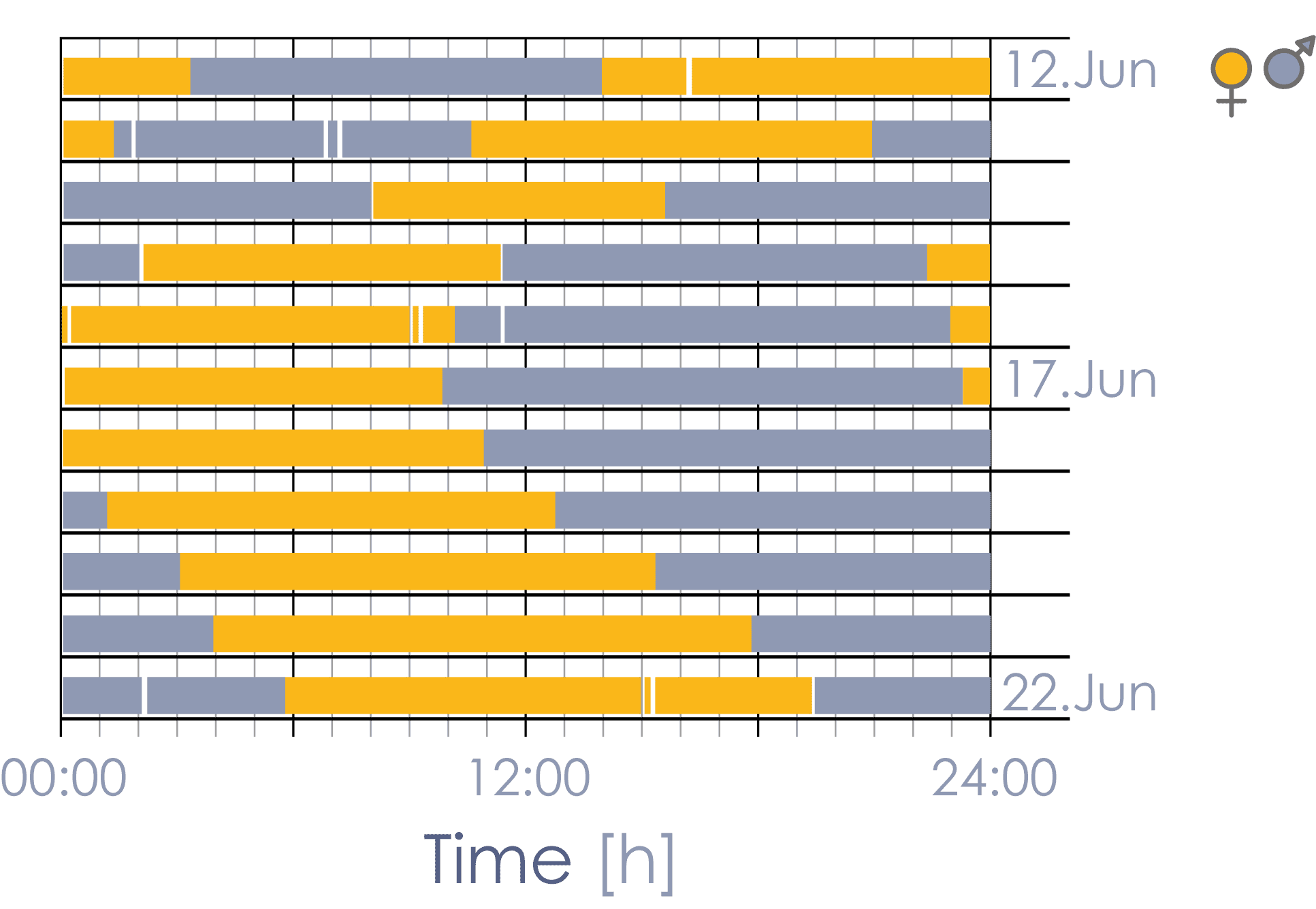 We were curious to find out whether such rhythm is the norm or one of many possibilities in this and other shorebird species. We were also curious to investigate what stands behind such rhythm (phylogeny, tidal-life history of the species, weak day-night light cycle in the arctic, energetic demands of incubation).

To satisfy our curiosity, since the beginning of my PhD we hoped to gather data across shorebird species. Back then – naive about the constrains (expensive equipment, tricky logistics, and labour intensive data collection; Picture 1-3) – I proudly presented to Bart and Theunis – a renowned shorebird scientist and a member of my PhD advisory committee – an ambitious list of biparental shorebird species for which I wished to collect the incubation data (Table 1). I think my enthusiasm resonated with Bart’s curiosity, but Theunis kept us down to Earth: “I suggest you haphazardly collect the data on the species you can get your hands on. Later we will see what you get and whether it is worth any further investigation”. Six years later when I presented the results (of what is now the Nature paper [3]) at the Wader Study Group conference in Iceland, the audience was thrilled. Smiling Theunis admitted “I never believed you would pull this off”. 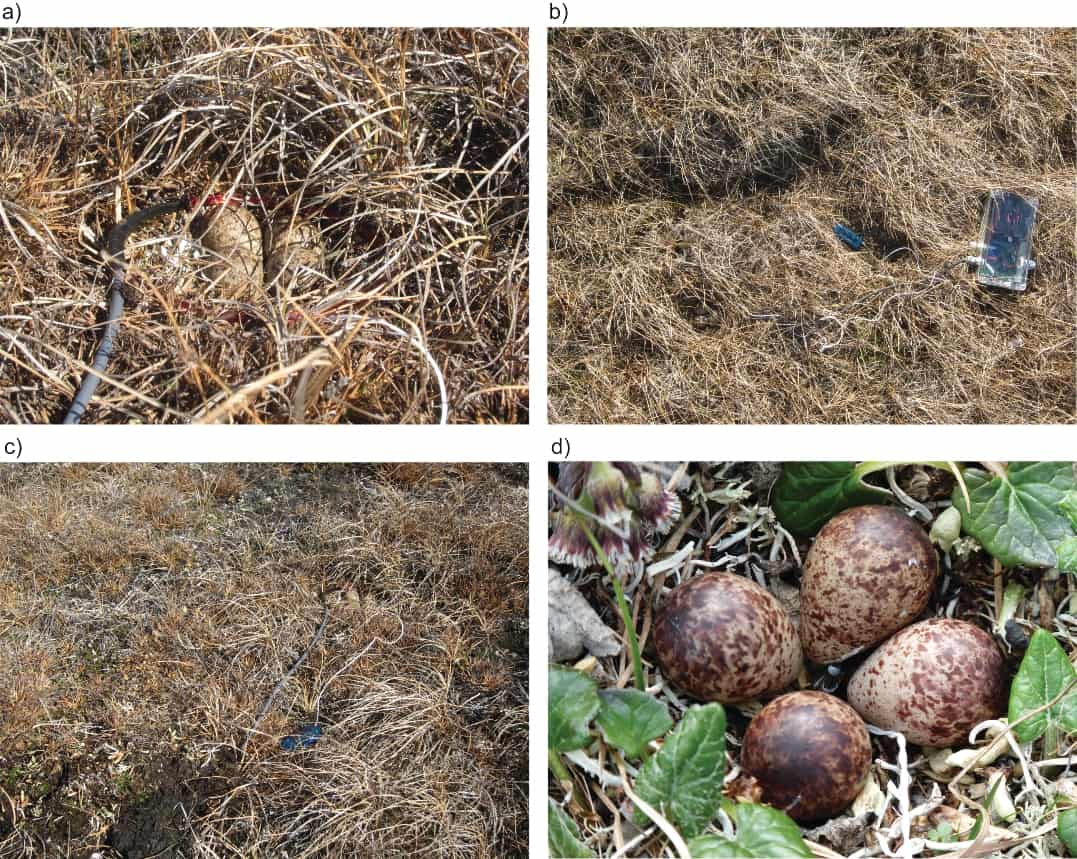 Picture 1 | Automated incubation monitoring system. (a) The red coil around the nest detects bird's identity. The coil is connected to the radio frequency identification reader (b) that is then hidden in the vegetation (c). (b,c) The blue logger records tundra temperature, and connects with temperature probe that registers temperature in the nest. Taken from Bulla et al 2014 [2].

Table 1 | Proposed list of species for monitoring of incubation 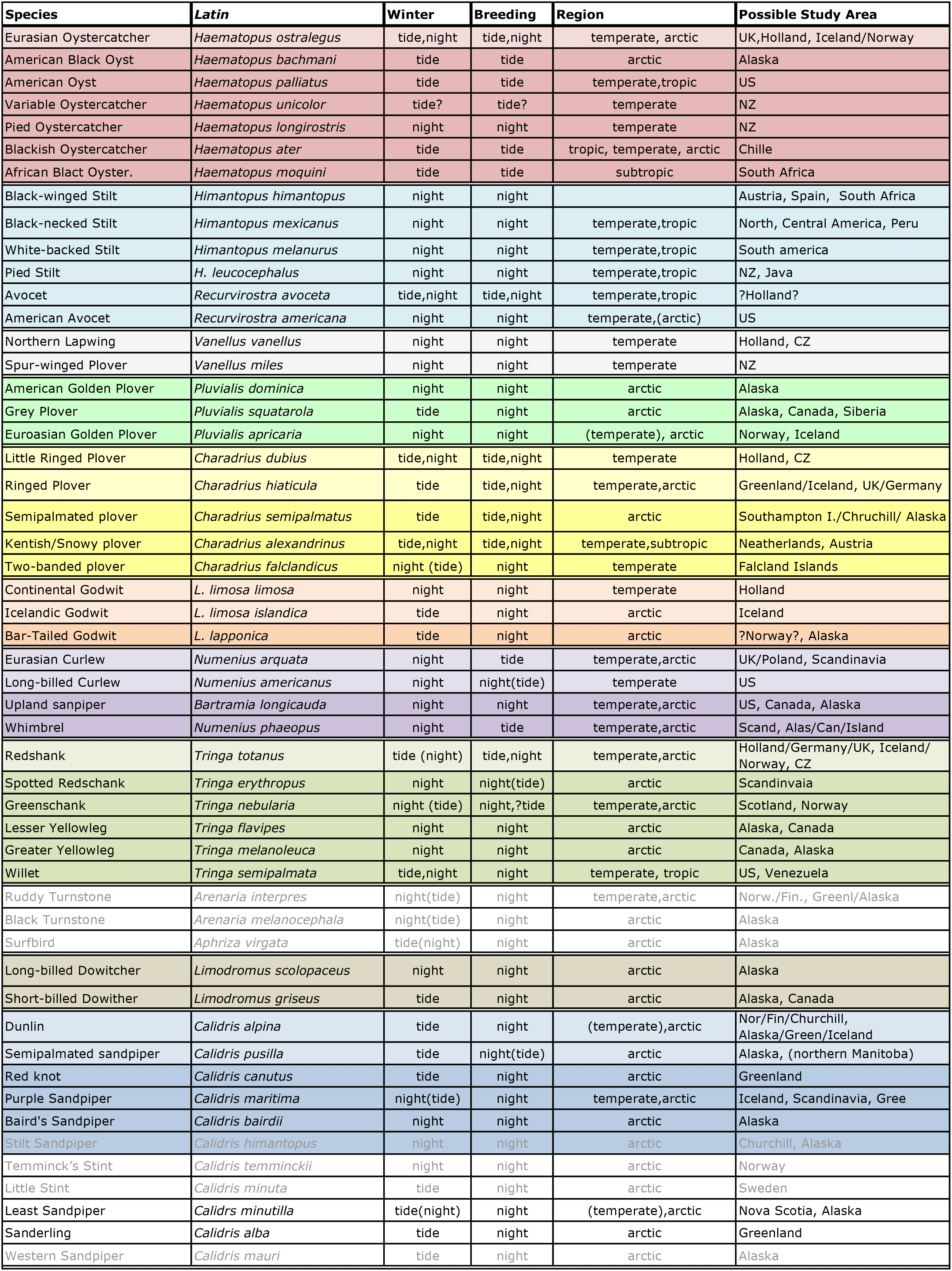 The initial answer from Theunis was not the answer I was hoping for, but it was not a clear “no” to the project. So off I went and beside my main PhD project – studying variation in incubation rhythms among pairs of semipalmated sandpipers [2, 4, 5] – I have collected incubation data on all biparental species, I could get my hands on (here you find how some shorebird species behave when approaching the nest, incubating or leaving the nest, below an example of incubating northern lapwing). Bart was a tremendous support in this endeavour. Not only did he finance more monitoring systems (Picture 1), but we collected data in various locations within the same breeding season (Alaska and the Netherlands; Alaska and Iceland; Iceland, the Netherlands and the Czech Republic). Although financially and labour intensive, such data would not get us very far within the course of one PhD.

The breakthrough in this project came when I realized that shorebird researchers and enthusiasts investigate their migration patterns with light loggers (geolocators) that are attached to the bird’s leg. As birds sit on their legs while incubating, I could use such data to infer incubation even when nobody was physically present at the breeding area, that is, even for the species that were tagged and recaptured 16,000 km away from their breeding ground (e.g. for bar-tailed godwits overwintering in New Zealand [6]).

Then followed a period of time consuming administrative work – asking those I knew or those that had been suggested by others whether they would share their light logger data or any other data on incubation; gathering raw- and meta-data from all who agreed (all of them), checking the data (and asking many questions about them), visualizing the incubation rhythms, and putting together the final dataset for analysis.

The collaborative spirit of the shorebird community made this large-scale study possible. In addition, we asked for data in an advertisement in the Wader Study Group Bulletin and again when I presented preliminary results at the 2014 Wader Study Group Conference in Estonia. In this way, we gathered all available shorebird incubation data with more than few days of incubation and containing mostly entire incubation period. 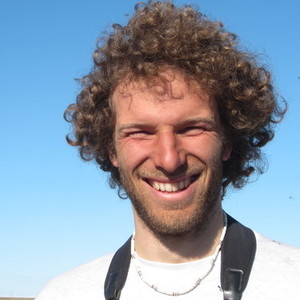 Behavioural ecologists passionate to reveal and explain the diversity in rhythms of (shorebird) parental care in the wild, as well as to demonstrate how such socially synchronized rhythms come about.