What is the early human story of East Asia?

The development of technology to extract and sequence paleogenomeshasrapidly expandedresearch frontiers across multiple disciplines, especially those concerning the history and biology of humans. Paleogenomes provide unique advantages allowing direct observation of changing genetic patterns in prehistoric populations, revealing rich histories of continuity and turnover over time and often providing insight into population movement and interaction difficult to observe otherwise.”

Paleogenomes have told us much about early human stories across much of Eurasia, but surprisingly, the genetic history in East Asia, especially China, is poorly understood despite the rich human history that exists there. Even as I focused on research studying ancient Europeans, the untold history in East Asia called to me.

Driven by this question, I began to conceive a paleogenomic study of early East Asians in 2012, focusing on systematic, representative, and extensive sampling using a temporally deep and spatially wide framework.

A common thread across all paleogenomicresearch is that human prehistory in different regions of the world have a complex history of movement, separation, and interaction. In studies focused on Europe in which I collaborated, we had already determined that early European hunter-gatherer genetic ancestry decreased with increasing replacement and gene flow from the immigration of early agriculturists from the Near East since about 9,000 years ago, followed by movement of Yamnayapastoralists from the steppe (1) since about 5,000 years ago. These patterns hinted at a correlation between agricultureand population shifts.

What then of East Asia? As one of the main agricultural centerswhere two different major crops, rice and millet, were domesticated, an important question was whether population shifts played a similar role. That is, what populations existed in Neolithic East Asia, and how did they interact with each other? How did those early populations relate to present-day East Asians? What migration patterns occurred, and how did they contribute to the genetic makeup of East Asians today?

Chasing the answers to these questions took us on a journey across East Asia's mainland and its nearby islands, as we looked for ancient humans with enough DNA left to open a door on East Asia’s prehistory. We found it especially important to cast our spotlights on northern and southern China because first, two different zones of agriculture independently developed, as millet originated in northern China and rice originated in southern China; and second, today’s East Asians show a distinct north to south cline of genetic relatedness (2).

In 2014, we gained genomic data of several key samples from the northern coastal mainland of Shandongand the southern island of Liangdao, and using them, we made progress understanding the genetic characteristics of past Northern and Southern East Asians. However, there were many unanswered questions.

Were the isolated Liangdao islanders actually representative of typical mainland southern East Asians? In the Andaman Islands off the coast of India, for instance, the present-day Onge population were found to be very different from mainland populations in India, as the Onge belonged to a population that separated from non-Africans soon after migration into Eurasia from Africa. We needed more mainland East Asian samples. Thus, we began a long project lasting six years to acquire samples and their paleogenomesfrom southern mainland East Asia.

We believed that a targeted paleogenomicresearch program sampling across northern and southern China could address the questions above on the role agriculture may have played in shaping present-day human genetic patterns in East Asia. After eight years of difficult sampling, challenging experiments, strenuous data analyses, and continuous scientific exploration, we can finally share some answers to those questions in Yang, et al. 2020 (3). This process was a shared adventure full of disappointment and elation, especially in our efforts to acquire genetic material from southern East Asians, as hot and humid weather makes it less likely that ancient DNA is conserved to the present day.

Temperature and humidity have a remarkable influence on the persistence of DNA over archaeological and paleontological timescales, and it has reflected the preservation bias toward cooler, dryer climates (4). For hot and humidmainland southern China, capturing endogenous DNA from the rare human fossils that were available was difficult, as human DNA was often degraded and overwhelmed by microbial DNA.

We were lucky enough to receive substantial support from many museums and archaeological institutions in southern China who over four years helped us collect 257 ancient human samples from over 30 archaeological sites. Moving past the first challenge of forming meaningful connections with archaeologists from multiple areas, we next delved into the challenge that I specialized in: extracting and sequencing the genetic material of these ancient humans.

Despite devoting huge amounts of resourcesto thesepaleogenomicexperiments, most samples contained too little or no DNA at all. To break through this sequencing bottleneck, we explored cutting-edge experimental methods, such as using single-strand DNA library preparation technology and co-developing ancient nuclearcapture technology. From these efforts, we finally gained 18 paleogenomesof 8,400-to-4,200-year-old southern samples from six archaeological sites from southern East Asia.

No pains, no gains. These southern mainland population paleogenomes, especially the nuclear genomes, not only filled a significant gap geographically and temporally in East Asia, but they also led to significant findings. What surprised us the most was that the paleogenomeof the 8,400-year-old individual from Qihe cave, Fujian, who was suggested to be a “first layer” early Asian like the hunter-gatherer Hòabìnhiansfrom Southeast Asia (5, 6), was more similar to present-day East Asians thanHòabìnhians. This individual and other ancient southern East Asians show that the deep roots of Austronesian-speakers originated from Neolithic populations in southern China that date to at least 8,400 years ago. In comparison to ancient northern East Asians, we observed high genetic differentiation between early East Asians from northern and southern East Asia by 9,500 years ago. Bidirectional population movement and high gene flow between these ancient northern and southern East Asian ancestries since then has led to a mixed present-day East Asian population, pointing to a complex history of continuous migration and interaction in Neolithic East Asia.

However, the paper just tells a single chapter of East Asian prehistory, and more paleogenomic studies focused on East Asia will continue to clarify human stories in East Asia.

Fig. 1. Sampling a tooth in the Institute of Vertebrate Paleontology and Paleoanthropology (IVPP) cleanroom (Credit: Qingguo Liu from IVPP)

Fig. 2. One of the key analyses in the study showing the changes in northern and southern East Asianancestry over time. In the Neolithic (A-B), northern (green) and southern (blue) ancestry correspond to geography. By the present-day (C), almost all East Asians show more northern EastAsian-related ancestry, suggesting population movement from north to south in East Asianprehistory. 1300-year-old individual from historical times.

Fig. 3. Skull of Qihe 2, a ~8,400-year-old individual from Qihe cave, Fujian, China. This individual’s southern ancestry can be foundalong the coast of mainland southern China and islands in the Taiwan Strait. Comparisons to ancient individuals like Qihe 2 shows that the deep roots of Austronesian-speakers originate from Neolithic populations from southern China. 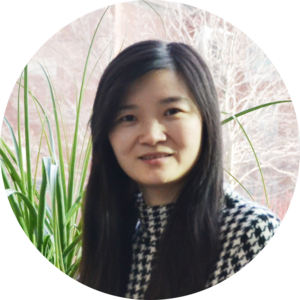 Professor, Institute of Vertebrate Paleontology and Paleoanthropology of CAS