Deep-sea hydrothermal vent communities are among the most exciting scientific discoveries of the 20th Century, completely overturning the pre-existing image of the deep ocean being mostly devoid of life. Dense aggregations of giant clams, mussels, and tubeworms up to two meters long living in shimmering hot springs found at the Galapagos Rift in 1977 were not only species new to science, but they also had a way of life previously unheard of – getting energy from chemoautotrophic bacteria living within their cells. By extracting energy from reducing substances like hydrogen gas and hydrogen sulfide originating from the Earth’s crust, these animals feed on the Earth’s energy, as opposed to most other lifeforms which ultimately depends on the Sun through photosynthesis. Now, we have found about 600 of these submarine oases around the globe, and with them a few more groups of animals that exhibit intricate symbiotic relationship with microbes. This includes the Scaly-foot Snail, Chrysomallon squamiferum, from the Indian Ocean best known for its unique scale-armour infused with iron sulfide minerals, which harbours a sulfur-oxidising endosymbiont living in its enlarged oesophageal gland.

The most recent discovery among vent animals with endosymbiosis is the snail Gigantopelta, inhabiting southern hemisphere vents that still remain understudied compared to their northern hemisphere counterparts. This genus was initially discovered in the first vents discovered in Antarctic waters in 2009, when Gigantopelta chessoia was found on the East Scotia Ridge (56–60°S, 30°W) by a research team from the United Kingdom. Later in 2011, a second species, G. aegis (named for its large operculum covered by a thick tablet of iron oxide resembling a shield), was found in the Indian Ocean, in the Longqi vent field (49°S, 37°E) on the Southwest Indian Ocean Ridge. Gigantopelta is in Peltospiridae, the same family as the Scaly-foot Snail (Figure 1), which is a vent-endemic family representing a Cenozoic radiation. These two genera are much larger (~50 mm shell length) than other peltospirids (~10 mm shell length) which are mostly deposit feeders and grazers.

The story of revealing Gigantopelta symbiosis began in 2010, when G. chessoia was first collected from the Antarctic vents. Initially, its taxonomic affinity was unclear and scientists only looked in the gill (where most endosymbiotic molluscs host their bacteria), an effort that did not reveal any symbionts. It was only a year later, when the snail was identified as a peltospirid, that scientists looked in the enlarged oesophageal gland where the Scaly-foot Snail is known to host its bacteria. Sure enough, this revealed a dominant sulfur-oxidising symbiotic bacterium, later also confirmed in G. aegis, marking the discovery of a new animal genus with the ability to use chemical energy through symbionts. Interestingly, phylogenetic analyses of Gigantopelta later revealed that it is in fact not the sister genus of the Scaly-foot Snail, and anatomical differences between the two indicated that the two genera actually evolved this special bacteria-housing organ independently through convergent evolution. So, the original discovery of symbiosis in Gigantopelta was partly helped by a stroke of luck – a lesson to the future is that animals could evolve endosymbiosis in different parts of the body, so we should look out for symbiosis in various organs.

A further twist to Gigantopelta symbiosis was that through transmission electron microscopy, we could see two types of microbes in the oesophageal gland of both G. chessoia and G. aegis– including one exhibiting stacking intracellular membranes typically known for methane oxidising bacteria. However, only sequences of a sulfur-oxidiser was found from sequencing of the 16S rDNA. This incongruency lasted for some years, and remained unresolved. ‘Dual symbiosis’ with two types of chemosynthetic bacteria, although known, is relatively rare. Does Gigantopelta really have dual symbiosis? Shedding light on this issue needs more in-depth analyses – but collecting more samples appropriately preserved for this is not easy, as the ‘most accessible’ site where Gigantopelta is known from is the Longqi field which takes at least one week from Cape town, South Africa by ship, and the sea condition there often precludes submersible dives (‘Roaring Forties, Furious Fifties, Screaming Sixties’ refers to sea conditions in those latitudes).

Finally, in April 2019, we had the opportunity to revisit Longqi on the third leg of the 52nd cruise by the China Ocean Mineral Resource R&D Association (COMRA) on-board R/V Dayangyihao with the Remotely Operated Vehicle Sea Dragon III. The aim of this cruise was to investigate the biological diversity and population connectivity among Indian Ocean vent sites, with emphasis on Longqi and Tiancheng vent fields. On the Tiamat chimney (Figure 2) of Longqi field, we found Gigantopelta aegis and Scaly-foot Snail living side-by-side, and also together with other smaller snails in the same family, Dracogyra subfuscus and Lirapex politus. After weeks at sea, we successfully collected numerous peltospirid snails including G. aegis. We were able to prepare samples appropriately preserved for various deep omics analyses such as flash-frozen specimens and those fixed in RNAlater and paraformaldehyde. 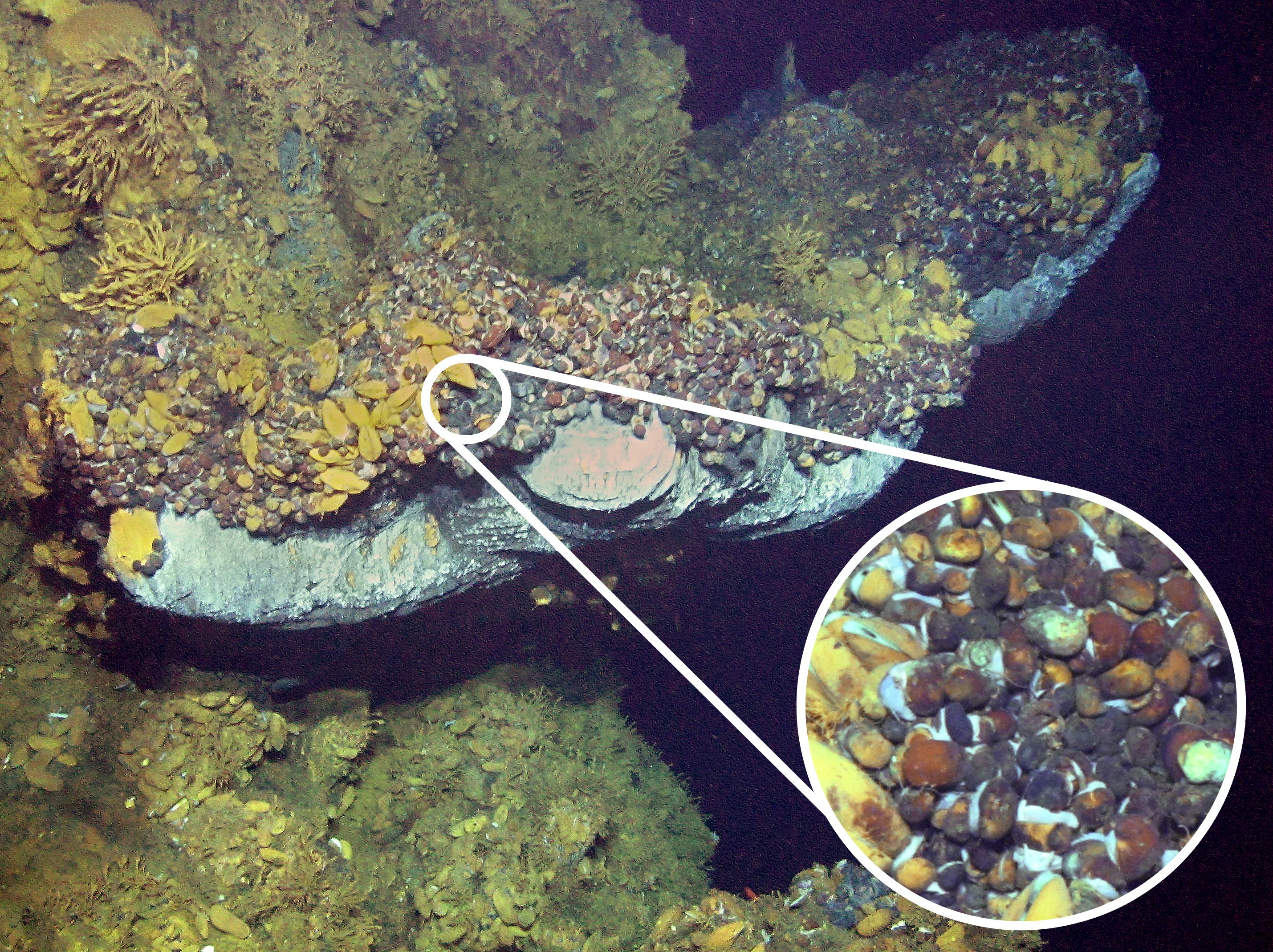 Using these samples, we carried out a comprehensive study of symbiosis in Gigantopelta aegis. With high-throughput hologenome sequencing and additional imaging work, we finally managed to pin-point a second methane-oxidising endosymbiont with complete methane oxidising pathway living in the same cell as the more dominant, sulfur-oxidising one. In addition to assembling high-quality genomes of the host snail and its two symbionts, we were also able to carry out Hi-C sequencing to further scaffold the assembled contigs of the host genome into a high-quality, chromosomal-level genome assembly. Phylogenetic analysis showed that sulfur-oxidising symbiont of G. aegis is only distantly related to that of the Scaly-foot Snail, further supporting the hypothesis that they evolved symbiosis convergently. However, they shared the same capabilities in making different types of nutrients that the hosts cannot synthesise themselves, possibly an important reason why they became partners of these snail hosts.

Having two symbionts grants G. aegis with exceptional versatility in using different energy sources, as well as being able to complement each other’s capacity in metabolism and synthesising nutrition. Our study signifies the importance in studying all parties of a symbiosis to similar depths – looking at both sides of the shield, and is yet another example of remarkable evolutionary adaptation in deep-sea hydrothermal vents where so much more are surely waiting to be found.

This blog was co-written by Jin Sun (Ocean University of China) and Chong Chen (JAMSTEC). 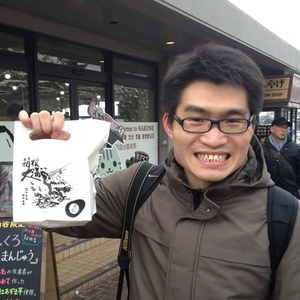