Insects are the true innovators of flight, evolving their wings long before birds and bats. Yet, we do not know how their wings evolved. Through searching for the “wings” of a crustacean we hope to gain an understanding of where insect wings came from and how this novel structure emerged.

Insects were the first animal to take to the skies over 350 million years ago1. The emergence of the novel insect wing structure that facilitated this feat has greatly contributed to the evolutionary success of insects. Yet, the evolutionary history of this structure is shrouded in mystery. The origin of the insect wing has captivated scientists and has been debated for over 200 years. Over the course of these debates, two possible wing origin tissues have been identified: a lateral outgrowth of the dorsal body wall (tergum) and ancestral proximal leg structures (pleuron in insects). However, there is still no consensus as to where insect wings came from and how they have evolved.

I completed my graduate work in Dr. Yoshinori Tomoyasu’s lab at Miami University in Oxford, Ohio (yes, this combination of university name, town, and state was extremely confusing to others at conferences). Yoshi’s lab is interested in understanding the molecular mechanisms that underlie the amazing biological diversity seen on this planet and we use insect wings as a model to study morphological diversity. More recently, we also started to investigate the evolutionary origin of insect wings. Our foray into this long-debated field stemmed from a project I had pursued as an undergraduate in Yoshi’s lab where I was comparing the function of one gene important for wing development (vestigial (vg)) between the two main research organisms in our lab at the time: the red flour beetle Tribolium castaneum and the fruit fly Drosophila melanogaster. The surprising result that led to us venturing into the insect wing origin debate was that when I knocked-down vg in beetles, I saw a loss of wing tissues (expected) AND effects in segments that did not have wings (unexpected). This project evolved with functional and expression analyses of other critical wing genes in Tribolium, and early in my graduate career I found that beetles have two wing-related tissues in their wingless first thoracic segment (wing serial homologs)2. These two tissues can be independently related back to each of the two wing origin hypotheses, providing the first functional evidence in support of the idea that both of the proposed origin tissues contributed to the evolution of insect wings. This suggested that insect wings have a dual evolutionary origin and provided an opportunity to unify the two historically competing hypotheses.

After wrapping up this project in beetles I was left wondering if having two separate wing-related tissues (one tergal and one pleural) in the wingless segments was a general characteristic for other insects and non-insect arthropods. Could this truly be the ancestral state for wing tissues? I was brainstorming about other organisms in which I could attempt to identify wing homologs when I was invited to attend the Okinawa Institute of Science and Technology (OIST) Winter course “Evolution of Complex Systems” (OWECS). At this course, I was introduced to many amazing evolutionary and developmental biology (evo-devo) researchers including Dr. Nipam Patel. I remember sitting (probably fairly jet-lagged due to the time difference) and listening to his talk about the development of an emerging crustacean model and suddenly getting very excited. This crustacean (Parhyale hawaiensis) had a similar body plan to insects (dorsal body wall adjacent to proximal leg structures) and some basic established molecular biology tools, and I remember thinking “I wonder if those large flappy  things at the base of the leg (what I now know to be called coxal plates, and not so flappy) are dependent on wing genes?” Just like that, the premise for this project was born.

Fast forward a few months – I reached out to Nipam and drafted a proposal for an Evo-Devo-Eco Network (EDEN) research exchange grant. Originally, this was to look at expression and function of just vg and would be completed in three months. This proposal was funded and supported my travel to Berkeley to work in Nipam’s lab for five weeks in the summer of 2015. The short time I spent in Nipam’s lab was an amazing scientific experience for me. I learned how to handle and care for the Parhyale, dissect and fix their embryos for in situ hybridization to visualize expression pattern, and collect and prepare embryos for injection for knock-out experiments. More than that, I was exposed to science at a larger university (my home department’s graduate program was small, but mighty) and made scientific friends that I still communicate and collaborate with to this day. It was truly an invaluable experience for my development as a scientist as well as critical to the success of this project.

While working in Nipam’s lab I got my first taste of data for this paper: expression pattern of vg and the phenotype of Parhyale vg mutants. Somewhat surprisingly, these data matched what I envisioned when I listened to Nipam’s talk in Okinawa a few years prior. vg was expressed in the proximal part of the leg as well as in the edge of the dorsal body wall. When we knocked out vg, these tissues disappeared (so...yes, those large flappy things are dependent on wing genes). It was one of those rare, eureka moments in science. A moment where everything starts to click into place and you get super excited about your results. Sadly, I was in the lab at some ungodly hour (remember, I only had 5 weeks to get data), so no one was immediately around to share in this excitement. However, Nipam was in his office, and he kindly allowed me to pull him to the microscope and shared in my enthusiasm for these results.

When I returned back to my home lab, I got to work setting up my own culture of Parhyale, and I took some time to think about this project. The expression and functional data I had from vg aligned nicely with what we had previously seen in the wingless segments of beetles (two separate tissues dependent on wing genes, one tergal and one pleural/proximal leg)2, but was this data enough to support the hypothesis that these structures are the “wings” of a crustacean? This was a question that we asked constantly throughout the evolution of this project: how many genes do you need to establish homology? One didn’t seem like enough, so I started working towards adding data for two more critical wing genes, nubbin and apterous.

In the end, this project, which was supposed to consist of looking at expression and function of ONE gene in Parhyale and take just a few months, ended up expanding to look at expression and function of three genes and expression alone of a handful more, and ended up taking about FOUR years. Ultimately, the effort that went into this project was well worth it. In our paper, we were able to show that a gene network similar to the insect wing gene network operates in both the edge of the terga and the proximal leg of Parhyale, suggesting that the evolution of this network precedes the emergence of insect wings. Additionally, it seems that both of these tissues qualify as potential wing homologs in a crustacean – meaning we had found the crustacean “wings”. It is striking to compare the potential wing homologs of Parhyale with those that have been identified in the wingless segments of insects2–8. In both situations, there are two separate tissues dependent on wing genes, one of tergal and one of pleural/proximal leg-related identity. The parallels that can be drawn between our results in Parhyale and the wingless segments of insects appear to support a dual evolutionary origin of insect wings and suggest that novelty (in the case of the novel insect wing) can evolve through a merger of two pre-existing, distinct structures.

In many ways the project presented in this paper has helped to define my path as a scientist. This work was my first expedition into the land of “emerging models” and helped to give me the tools necessary to work in other emerging systems as well. In parallel with this project in graduate school, I also worked on identifying wing-related tissues from cockroaches and mayflies to further expand our understanding of wing serial homologs in insects. When I joined Yoshi’s lab we had two organisms for the study of mechanisms underlying morphological diversification, when I left we had five. I have carried this trend with me into my postdoctoral research in Bob Goldstein’s lab at UNC Chapel Hill where I continue to curate my zoo of model organisms adding in multiple species of tardigrades and crustaceans (very much trying to live up to my twitter handle of “ArthropodQueen”), something I might not have been brave enough to try if it weren’t for this icebreaker project in Parhyale. 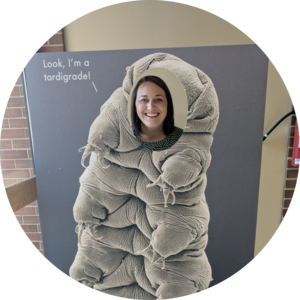