The loss of vertebrates is not only an ethical tragedy; it can have dramatic effects on the functioning of ecosystems. The loss of threatened species would cause a decline of up to 30% of the functional diversity. Conservation priorities should focus on species with unique ecological functions.

In 2019, the Intergovernmental Science-Policy Platform on Biodiversity and Ecosystem Services (IPBES) reported that “nature is declining globally at rates unprecedented in human history and the rate of species extinctions is accelerating, with grave impacts on people around the world”. Yet the vulnerability of the ecosystems face to the ongoing loss of species do not depend only on the number of threatened species but also on the ecological role of those species. These roles depend on the characteristics of the species (also called functional traits), like size, weight, shape, reproductive capacity, the food resource they use. If threatened species have unique functional traits, there loss can have dramatic effect on the functioning of the ecosystems, even with a low proportion of threatened species. Study only the number of species is not enough anymore, identifying the ecological role of the threatened species might help to better apprehend the future of the ecosystems.

Thanks to the Estonian Research Council, I continued my research activities as a post-doc and now as a researcher in the Macroecology workgroup at the University of Tartu. Together with colleagues, we wanted to extant this study on freshwater fishes to all groups of vertebrates and plants. In June 2018, we decided to meet in a small team of young researchers in the field station in the world-famous species richness of Puhtu-Laelatu nature reserve to think how to tackle this challenge.

During this meeting, we gathered as much as possible information about available functional traits for different taxonomic groups. We managed to compiled data of functional traits on about 70% of species of vertebrates (birds, mammals, reptiles, amphibians and freshwater fishes) and plants. For each groups, we collected data on relevant functional traits such as body-size, weight, shape, reproductive capacity, or the food resources they use. Using this unique source of data, we spent months to clean, harmonize and complement data in order to project the species in a functional space - a mathematical abstraction of their form and function (Fig. 2).

We published a first article2 showing that for all vertebrates and plants, the different functional traits can be summarized in two main ecological strategies: body-size (1st axis) and reproduction (2nd axis, Fig. 2). Moreover, simulating the loss of species listed as threatened of extinction by the IUCN, we showed that species with large body size and slow pace of life are more likely to be threatened of extinction. Given the huge importance of those species in the ecological processes, our results pointed out the need to devote strong effort to prevent the extinction of the megabiota. 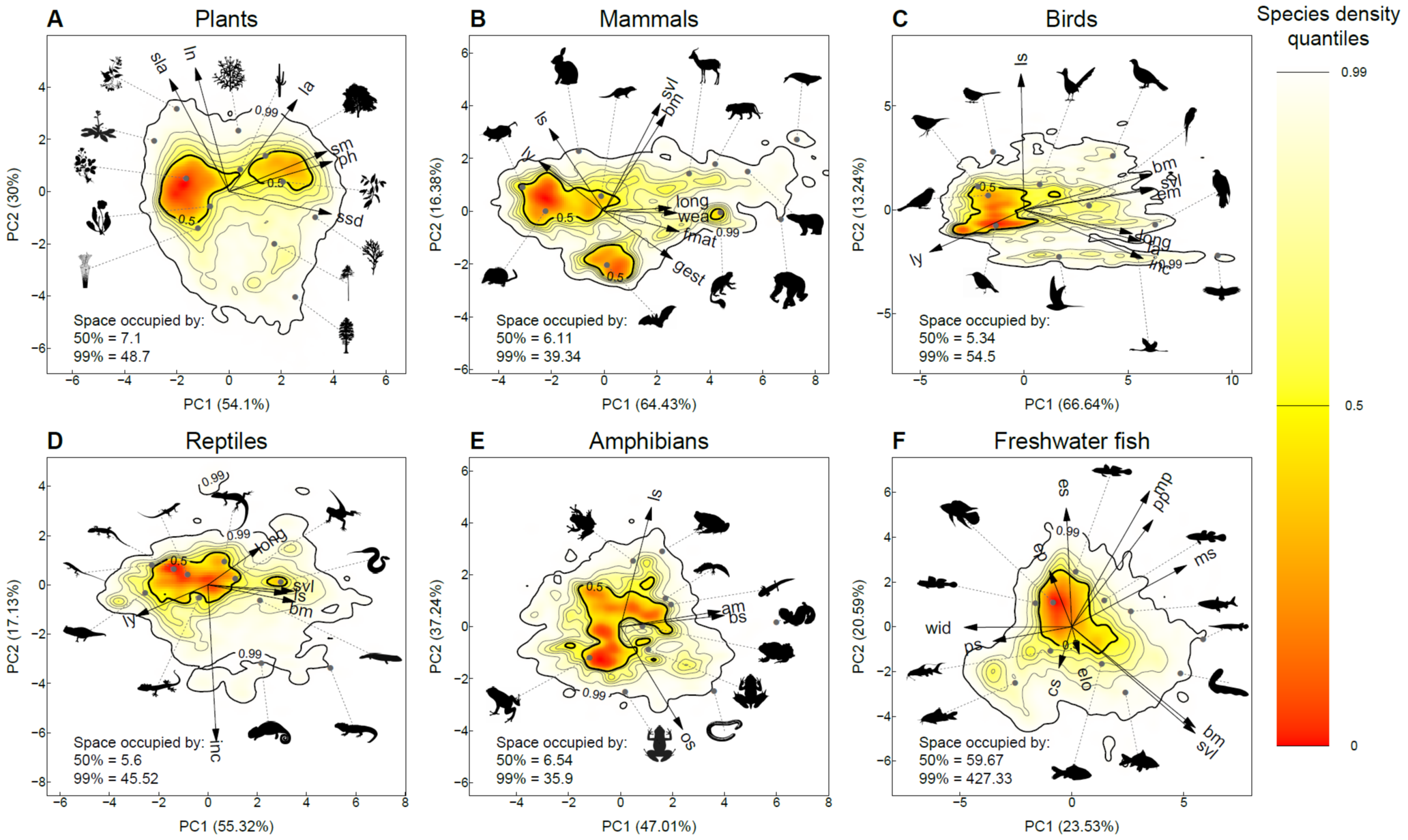 In our new article, we wanted to go further and understand whether the different regions across the world would experience a similar loss in functional diversity in case of all threatened species goes extinct. Indeed, since species are not evenly distributed across the world, we could ask whether some regions (e.g. the topics) which host higher proportion of threatened species would be more functionally impacted than others. For that, we gather additional spatial information on the distribution of nearly 50,000 species of vertebrates in the six main biogeographic realms (Afrotropical, Australian, Nearctic, Neotropical, Indo-Malay and Palearctic). The biogeographic realms are define as entities of Earth’s land surface based on distributional patterns of terrestrial organisms. Each realm differ by their number of species but also their proportion of threatened species.

For each biogeographic realm, we investigated the changes in the functional diversity between the actual period and a future scenario where all species identified as threatened by IUCN are removed. We obtained a “landscape” picture indicating which areas of the functional space are going to be eroded (darkred areas) and even completely lost (black areas, Fig. 2). By doing this for the five groups of vertebrates in each realm, we show that the loss of threatened species will lead to uneven functional loss among realms and groups of vertebrates. The most striking result is that the Indo-Malay is more inclined to loose high proportion of its functional diversity for birds and mammals (up to 20%) while the Palearctic could experience a drastic loss of functional diversity for reptiles, amphibians and freshwater fishes (up to 30%). Thus, the Indo-Malay does not only support a higher than expected proportion of threatened species, but also a higher than expected proportion of threatened species with unique functional traits.

Fig. 3: Example of shifts in the functional diversity after the simulated extinction of threatened species for mammals (Toussaint et al. 2021).

For reptiles, amphibians and freshwater fishes, the changes of functional diversity were more even across the world but affecting different kind of species. For instance, many large-bodied freshwater fishes, such as sturgeons (Acipenser spp.), are threatened in the Palearctic, whereas many small-bodied species, such as suckermouth armoured catfishes (Chaetostoma spp.), are threatened in the Neotropics. The Palearctic was the most impacted realms for amphibians because threatened species host a unique set of functional traits, while being functionally redundant with non-threatened species in the other realms. For example, the functional traits, such as viviparity and low fecundity of some threatened amphibian species such as salamanders (Salamandra lanzai or S. algira) are unique in the Palearctic, whereas similar traits are filled by another amphibian species in tropics, such as the caecilians in Afrotropical, Neotropical and Indo-Malay. 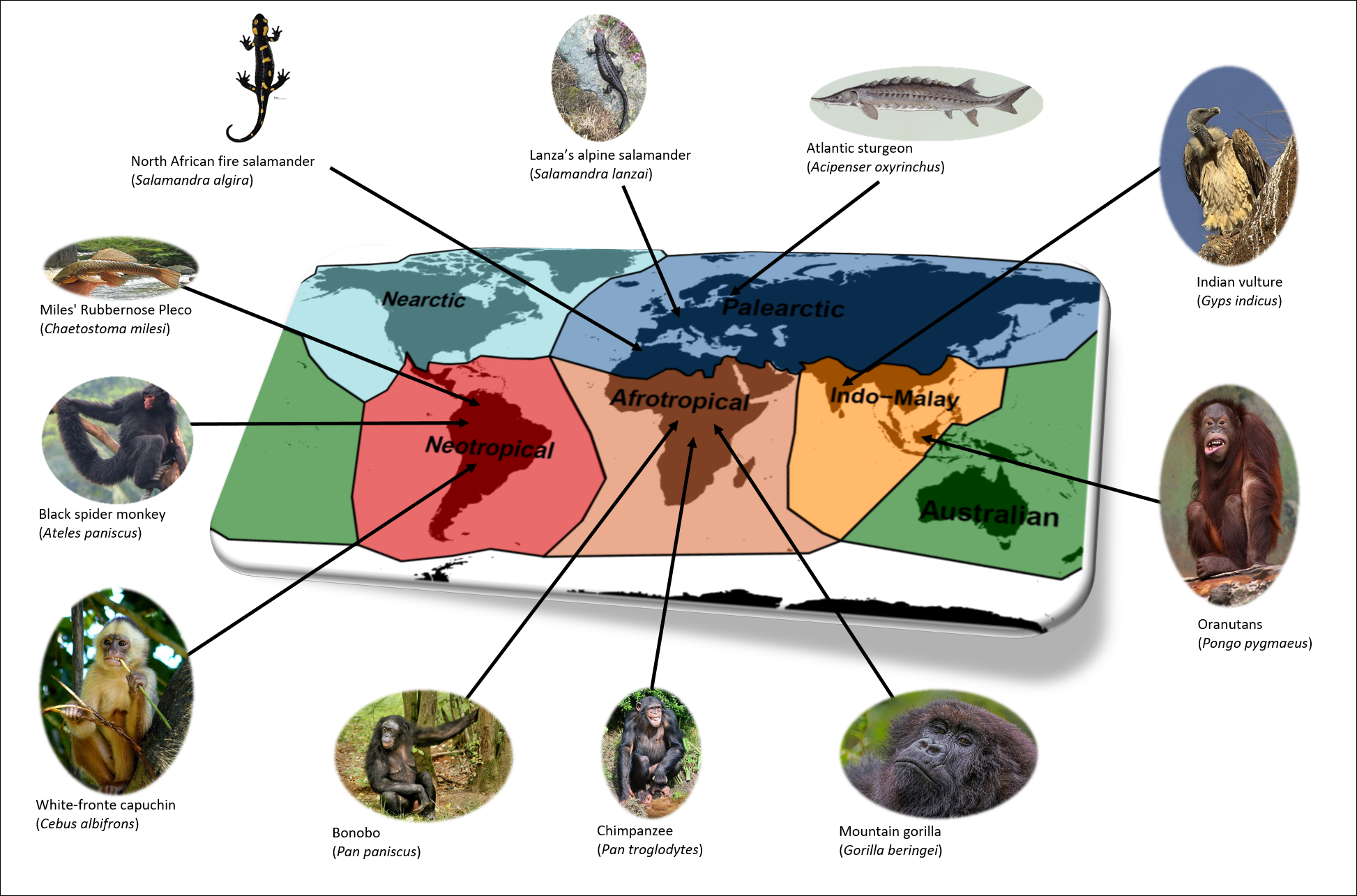 Even if we are not able to go further and predict the ecological consequences of such changes, the loss of species with unique functional characteristics might trigger a loss of stability of the ecosystems. Our study shows that for mammals and birds, large-sized species with a slow pace of life are threatened all around the world, whereas for reptiles, amphibians, and freshwater fishes, regional or local approach should be addressed to adapt the conservation of the biodiversity to the regional or local ecosystem properties.

The dawn of modern reptiles 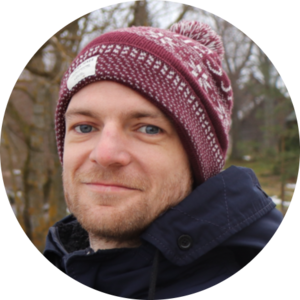