Spite is contagious in dynamic networks

The selection of a behavior that harms both parties in an interaction would seem at first paradoxical. Yet spite, a costly behavior that harms others, is observed in both humans and non-humans. This presents an evolutionary puzzle: if there are no fitness benefits why would it emerge?

One established explanation for the emergence of spite has to do with relative advantages. In a competition, you can win by performing poorly if your opponent does even worse. This can happen with spite provided that it is disproportionately directed at non-spiteful individuals. Specifically, for spite to emerge interactions between individuals playing unlike strategies need to occur more frequently than under random interactions. This type of interaction pattern is known as anti-correlation or negative assortment, while (positive) correlation describes the opposite, when interactions between similar types---individuals using the same strategies---are more likely to occur. 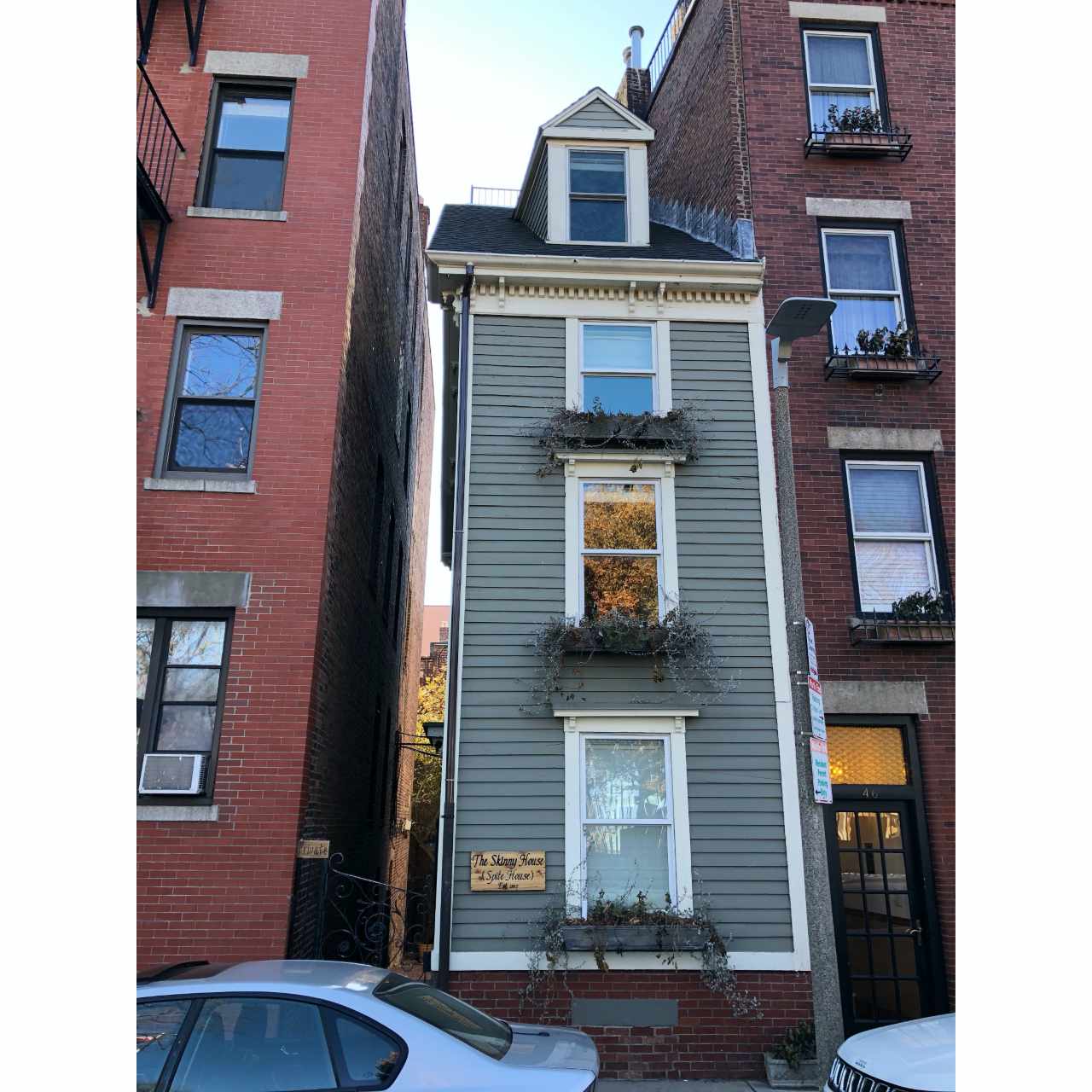 The Skinny (Spite) House in Boston. According to legend when one brother built a house on more than his share of an inherited property while the other was off fighting in the Civil War, the other brother returned and built an impractical house on the tiny strip of land left just to get back at his brother. (Photo by Patrick Forber)

What had not been explored in the context of spite is whether individual choices could naturally generate the kind of anti-correlated interactions needed for spite to emerge. We developed a model to study this question. Unlike previous models of the emergence of spite that relied on fixed assumptions about the levels of correlation in the population, we hypothesized that a simple form of learned preferential interaction could produce the necessary anti-correlation for spite to spread in a population. In our model, individuals are placed in a dynamic network and learn to interact with preferred partners via simple reinforcement. This endogenous approach provides a realistic mechanism for generating correlated interactions and enables the coevolution of a dynamic network and behavioral strategies. Building upon a previous publication in which individuals similarly used reinforcement learning to update their likelihood of visiting other individuals, we used computer simulations and analytic methods to explore a wide range of parameters and initial conditions. 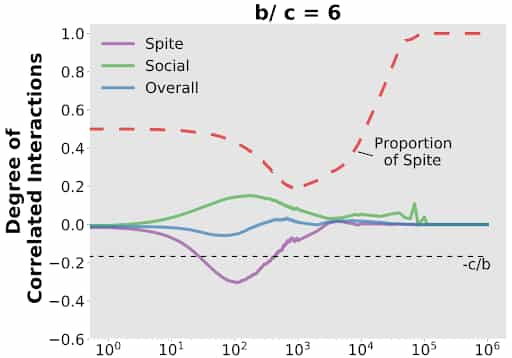 Figure: A plot demonstrating the simultaneous formation of like and unlike interactions for social and spiteful agents respectively.

Running simulations on a computing cluster allowed us to efficiently explore many different parameter combinations. Using a cluster computer is critical as each of our numerical simulations is based on random chance, and so we need to run each simulation many times to get at robust findings of "average behavior". With our software framework, we can run those simulations in parallel, thus cutting down on the time required to explore different parameters of the model. The complexity of the data created challenges for both visualization and analysis. After spending months refining how to visualize results and writing additional software to automate the generation of plots, the results became clear: dynamic networks did indeed allow for the spread of spite. Further analysis led to more surprises. We figured out a meaningful way to track average levels of correlated interaction in our model and to compare our results to the existing approaches. In our model spite was spreading far more readily, and with less overall correlation, than was previously thought possible. As spiteful individuals actively targeted non-spiteful individuals, the behavior spread as if contagious through the dynamic network. The figure above shows one of our key findings: while the overall correlation between strategies in the population is low (blue line), the anti-correlation among spiteful individuals is high. This is because spiteful individuals can---and do---target social individuals with their spiteful behavior. As a result, the standard condition for the invasion and stability of spite (overall correlated interactions below −c/b), does not need to be satisfied for the ‘Spiteful’ strategy to emerge in our model.

The results were also surprisingly robust: spite emerged and spread under a wide range of parameter values, initial conditions, and population sizes. It became clear to us that our model provides both a novel explanation for the emergence and spread  of behavioral spite as well as casting doubt on the generality of previous studies. Population-level statistics about population structure cannot capture the important effects of local individual behaviors. Similar findings have emerged in other areas such as network-based epidemiology: given complex and dynamic network structures global parameters like the R0 do not always accurately describe whether or not a pathogen will spread through a population.

Spite is contagious in dynamic networks is published in Nature Communications.