Singing in secret: Crickets that purr are protected from a deadly natural enemy

Three years ago, when Robin Tinghitella traveled to Kalaupapa, Molokai for the first time, she had no idea that what she thought was a purring cat disturbing her slumber would turn out to be the start of a long-term research project: observing the origins of new mating signals.

+4
Robin Tinghitella and 4 others See all
Associate Professor, University of Denver
Follow 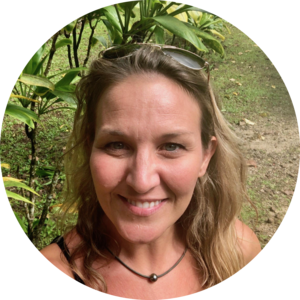 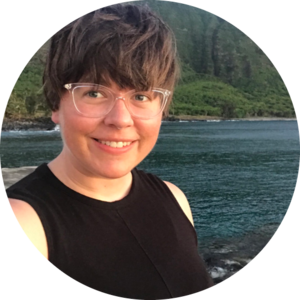 Hawaiian populations of the Pacific field cricket face a conflict - they should sing to attract and mate with female crickets, but singing also attracts a deadly natural enemy that eats them from the inside out. These opposing forces are what evolutionary biologists call “selective pressures”, and they can cause organisms to change over time. Over the last twenty years or so, this conflict the crickets face in Hawaii has been the source of much dramatic and rapid evolutionary change, particularly in the crickets’ songs. First, some male crickets went silent. Then they went silent again. Then they started purring. In all of these cases, the changes in the crickets' song appear to be protective, preventing them from parasitism.

View from our puddle jumping plane on the way from Oahu to Molokai (left) and co-first authors Robin Tinghitella and Dale Broder collecting purring crickets in Kalaupapa, Molokai (right).

We first described purring crickets in a paper that focused on how the new purring songs differ from the typical songs of their ancestors and whether female crickets can use purring songs to locate potential mates. At that point we thought purring crickets were only found on Molokai and we had no idea how long purring had existed there. But in our regular surveys across several long-studied Hawaiian populations, we began to see purring crickets arrive or arise in other locations across the archipelago. That discovery led to our latest paper in Nature Communications.

After realizing that the novel purring type was spreading across islands, and was truly a brand new mating signal in some of these locations, we set out to document the spread and to characterize the selection pressures acting on the purring songs. New traits are always evolving, and while we have many ideas about how that process begins, we lack real world examples--catching that moment in time when a new trait first evolves or arrives somewhere and becomes more common is incredibly rare. What are the conditions that allow new traits to evolve? What determines whether that new trait persists or vanishes? We have the unprecedented opportunity to answer these questions because of our timely discovery and long-term knowledge of what was happening in these populations before the purring trait arose. This paper is the first in a series that will do just that.

Because the crickets’ natural enemy, a parasitoid fly, listens in on singing male crickets to locate their hosts, and we know that silence protects the crickets from death, we first determined the fitness consequences (survival and reproduction) of the novel purring signal by investigating how female crickets and parasitoid flies respond to purring songs in the wild. These selective pressures will shape the future evolutionary trajectory of this new and novel signal. We played back purring songs, typical songs, and a white noise negative control to female crickets and gravid parasitoid flies in field studies conducted in six different island populations. We found that some female crickets from every island population moved towards purring songs (this is called phonotaxis); about 20% of female crickets liked purring and could locate purring songs. But we almost exclusively caught flies at traps broadcasting the typical ancestral song. We only caught one fly total at a fly trap broadcasting purring song in the field. This exciting finding suggests that purring may be a private mode of communication among crickets that protects them from the fly! That would make purring a new evolutionary solution to conflicting selection pressures. 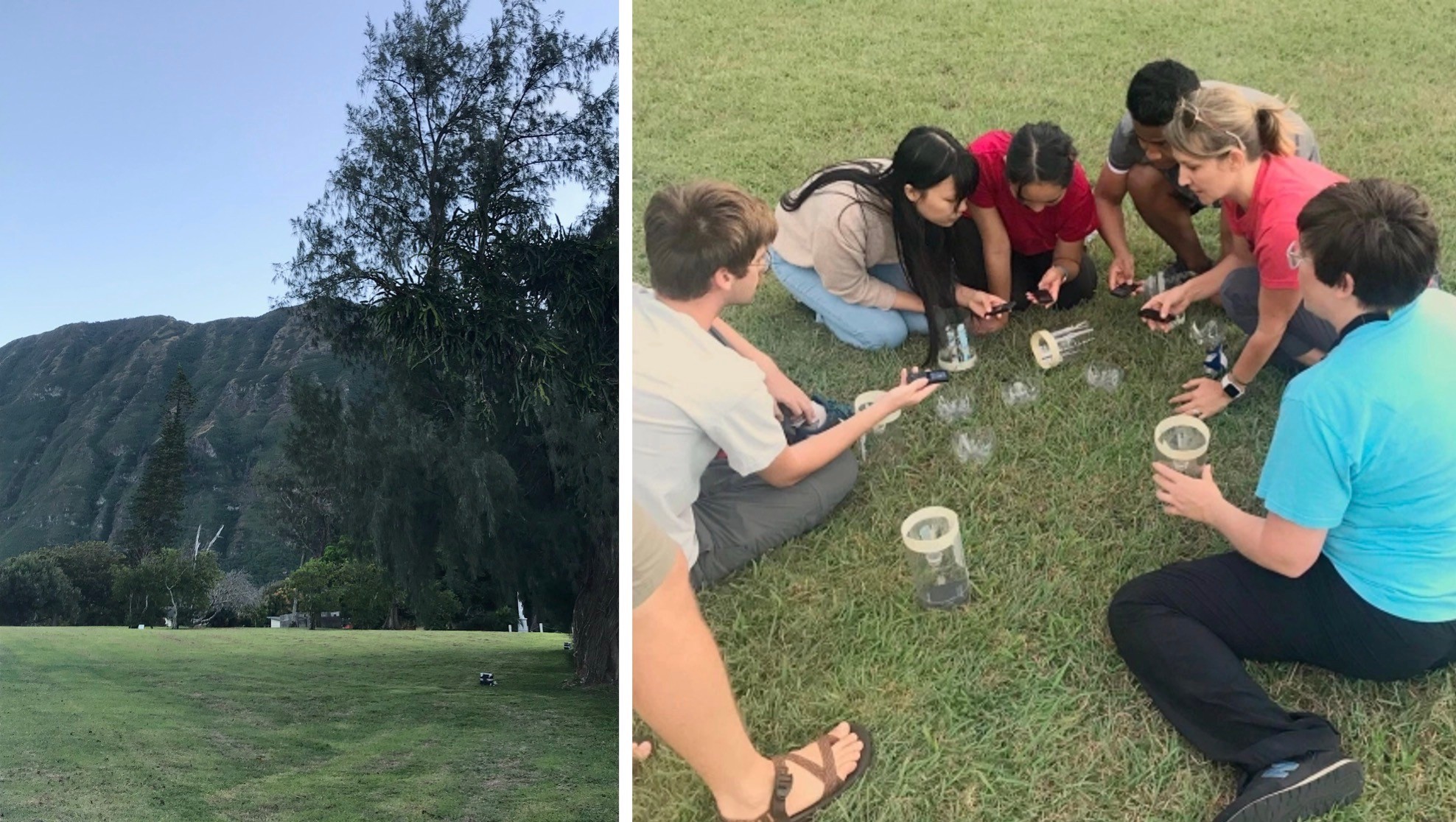 A typical field site where the crickets and flies live (left) and researchers Dale Broder and Robin Tinghitella teaching field assistants at BYU Hawaii to set out fly traps on their campus lawns (right).

Next, we asked what conditions surround the origins of novel traits. Purring songs are unusually variable among males, so we asked what kinds of purrs female crickets and flies are into. For example, do they prefer purrs that sound like the ancestral song? Or, maybe they like purrs they’ve never heard before at all (a preference for novelty, per se)? If certain purrs are inherently more attractive or enhance reproduction and/or survival more than others, we might predict those types of songs to become more common in our long-studied Hawaiian populations. That, we predict, is precisely how new mating signals come to be. 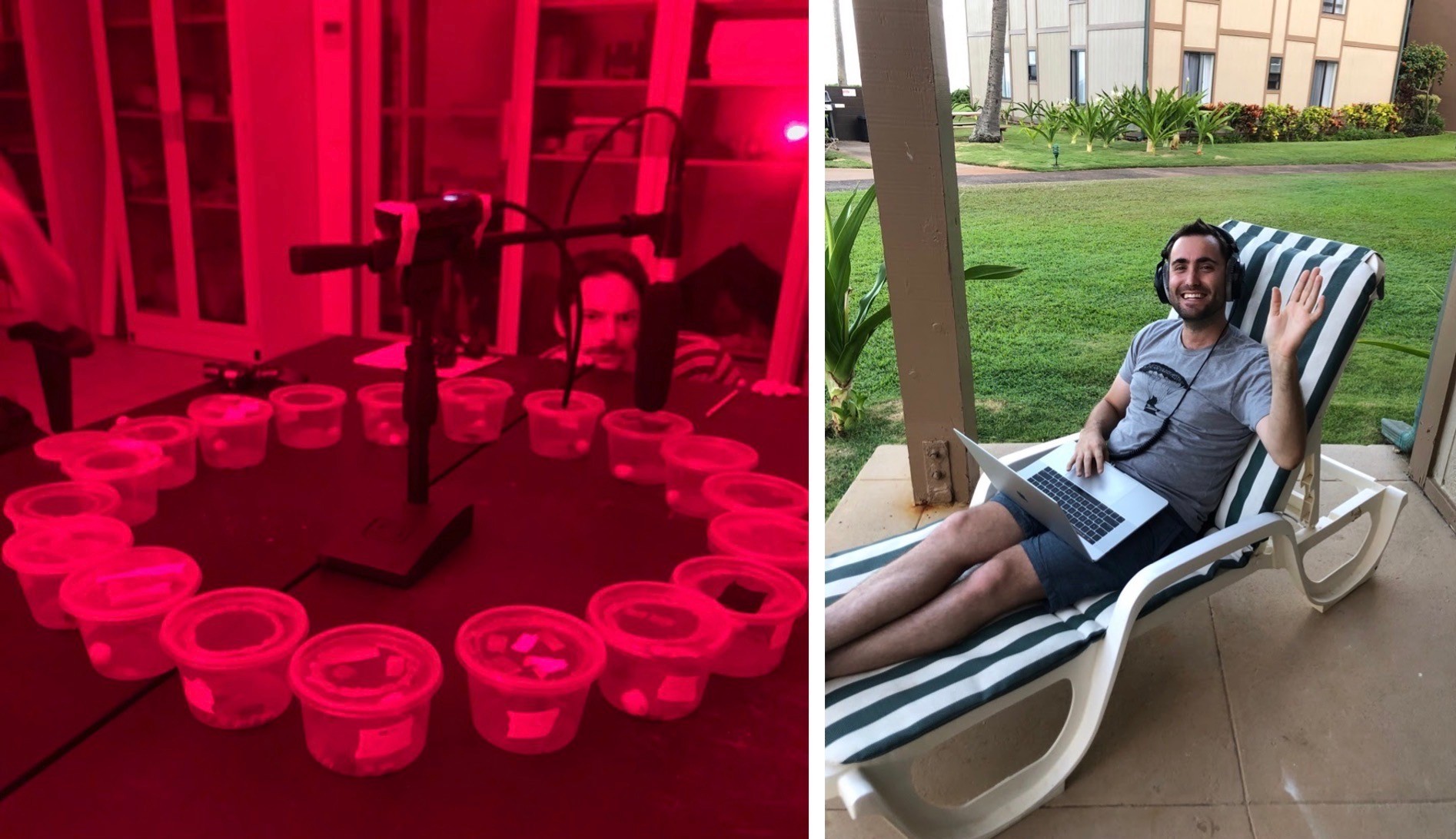 Postdoc David Zonana recording cricket calling songs (left) and PhD student Jay Gallagher identifying the purr-fect exemplar songs to play back in preference trials, all from the comfort of his lounge chair.

We recorded the songs of purring crickets from across the Hawaiian archipelago and then played many different variations of purrs (that differed, for instance, in song pitch and bandwidth and amplitude) to individual crickets and flies on a race track of sorts. To visualize which purr variants crickets and flies liked most, we graphed each individuals’ “preference function” - a curve showing their responses to all of the different songs we played.

Surprisingly, to us at least, we found that they liked them all equally! No purr is better than any other purr at the population level right now, but individuals did definitely like different things. So at least in our system, at “time zero”, very close to the evolution of this new trait, we have incredible variation in both the new signal (purring) and the preference for the signal (from female crickets and flies). That suggests that the purring signal may have evolved before receivers evolved a preference for the signal. Since we are re-measuring the crickets’ songs and the selection acting on the trait (preferences of female crickets and flies) every few months, we’ll be able to watch the very earliest stages of potential coevolution between male signals and female mate preferences and between hosts and parasitoids -- this is an unusual opportunity to watch these processes in real time!

What’s next? Here are a few big questions we’re asking now about how novel signals arise and persist: How do male cricket wings -- the instruments they use to produce sound -- create these new purring songs? Are purring songs the same everywhere or do they differ across locations? Flies exist in populations where there are no ancestral male crickets, so how do they find cricket hosts in these locations? What happens in the brains of crickets and flies when they hear these songs? And, finally, what are the genetic differences between cricket types?

Our research requires many late nights and hard work, but lucky for us, we have tons of fun doing it! Aloha until the next installment.

The fact that females are open (receptive?) to novel sounds from males - presumably a genetic change in itself? - means that purring gets accepted, I assume. But it must have some key elements of the previous signal for females to recognise? Still wondering how the changes in both signaller and receiver get hooked up together again? Fascinating research. I will read more deeply and try to include your findings in a book I am writing on Insect Courtship.😊

We are also really interested in these patterns and questions! I have a much older paper showing that female crickets in Hawaii are much less discriminating than those from other parts of their range, and there is a bit of work on plastic responses to living in silence (versus acoustic environments that include lots of ancestral song) that suggests females may be even more relaxed in terms of their mating requirements under those circumstances. So, we think there are a few good reasons that females in this system might be receptive to novel signals in this system. We're following up with some neurophysiology work now to try to figure out what crickets (and flies) are actually hearing and which components of the novel songs are sufficient to get a response from females - stay tuned!! We would love to be included in your book :)


Many thanks for your feedback. I definitely want to include your work on Teleogryllus oceanicus in my book on Insect Courtship (for CABI publishing) as the subject is so fascinating. I have obtained about 15 papers on this topic so far, but have not reviewed the subject area yet. But it's on the list! When I do so, perhaps you might like to comment on what I have written? I try to bounce the different sections off experts to get some sort of quality control.😊


My last book was on Courtship and Mating in butterflies. I hope there will be a soft cover version soon.