Menu
A community from Nature Ecology and Evolution
Contributor Heredity

Sex reversal in the alpine skink, Bassiana duperreyi, adds a new dimension to the impact of climate change of reptile populations

Most species in the animal kingdom rely on sexual reproduction to perpetuate their species. Sex determination, the decision of the developing embryo to become male or female, of is achieved via two main mechanisms. In the genotypic sex determination (GSD), sex is determined at the time of fertilization by the complement of chromosomes and genes passed to the offspring by mother and father. If the Y chromosome is inherited from the father to complement one of the X chromosomes from the mother, then the baby human is a boy. If the father's X chromosome is inherited, the baby human is a girl.

Sex, the reason for having two sexes, and the means by which it is determined has intrigued thinkers and scientists for centuries. What a surprise then to find, about 50 years ago, that sex in some reptiles is determined not by genes, but by the temperature experienced by the embryo during incubation – temperature-dependent sex determination (TSD).

Some species are even more confusing. They have sex chromosomes, but their influence is over-ridden by extreme temperatures, in the laboratory and in the wild. The Australian eastern three-lined skink (Figure 1) has a mechanism of sex determination similar to that of humans (i.e. they have XY and XX chromosomes) but low-temperature incubation of their eggs causes the XX individuals, normally destined to be female, to reverse to males. Fascinated by this, we examined populations of this little lizard along an elevational gradient from the seasonally snow-covered Australian Alps down to the coast of Victoria (Figure 2).

Current climatic change has significant impacts on several aspects of the biology and ecology of many reptile species on earth, which in some cases can lead to catastrophic population declines. Changing environmental temperature is increasingly considered a significant threat for reptiles with TSD. Our work on sex reversal indicates that GSD species may also be impacted, if temperature-induced sex reversal is more common that indicated by the two species so far demonstrated to exhibit this trait. This research provides added focus for on-the-ground management strategies to mitigate the effects of climate change on local populations.

Our work on the frequency of sex reversal in adults is now shifting focus to the frequency of sex reversal in the wild nests (Figure 3) and demonstrating reproductive viability and fitness of sex-reversed adults to round out the picture of sex reversal in the wild and its the fitness consequences in this remarkable species and others like it.  To find out more about this study, please check out our article published in Heredity (https://rdcu.be/ceziZ) (Dissanayake, D.S.B., Holleley, C.E., Deakin, J.E., Georges, A. High elevation increases the risk of Y chromosome loss in Alpine skink populations with sex reversal. Heredity (2021). https://doi.org/10.1038/s41437-021-00406-z). To find out more about the sex reversal of reptiles, visit our lab web page http://georges.biomatix.org/project/sex-dragons 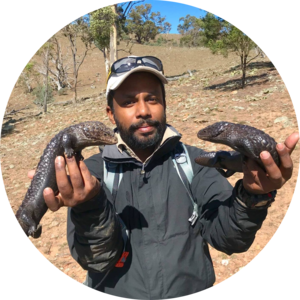 I am an evolutionary biologist interested in contemporary natural selection. I love integrating field research and molecular studies with theory and the way they interact with each other so well. My current research combines ecological and genomic principles to study the evolution of sex-determining systems, especially in reptiles. Further, I am interested in understanding the origin and evolution of species and identifying significant evolutionary units to resolve major challenges in species evolutionary biology. Also, I have continued my research on topics in broader natural history, snakes venom, diversity, and many other taxa.
Follow

Nature Portfolio Ecology & Evolution Community
We use cookies to help improve your experience. By continuing to browse our website you are consenting to our use of cookies.
Learn more