Since I saw my first original hominin fossil, the Bodo skull, back in the late 1990ies at the University of Vienna, I have been attracted by the idea of “repairing” broken fossils and assembling them to improve our ideas about the morphology of our fossil ancestors. Another aspect that has always fascinated me is measuring and analysing fossils with sophisticated technology; I like the moment when the unknown fossils plot in statistical spaces and when the 3D analysis reveals the details in which they differ or are similar to other, better-known fossils or structures.

Using these research methods, one can suddenly see new aspects of ancient humans emerging on the computer screen. What’s more, after 3D printing these “new fossils”, they can be investigated physically, which is highly inspiring and stimulates research ideas.

The project of thorax reconstructions in fossil hominins started some 10 years ago. Previously I had worked on cranial cavities, the cranial base of the brain, and the nasal cavity. In the context of the latter, my interest shifted to the evolution of the non-cranial part of the respiratory system, the rib cage.

Yet, it was clear that this was going to be a long and difficult research avenue. Not only because our Virtual Morphology Lab had yet to be developed, but also because fossils of the rib cage do not preserve well. However, even when ribs are complete, such as in the Nariokotome Homo erectus skeleton (also known as "Turkana Boy"), it is extremely difficult to measure them appropriately, as ribs do not really offer a lot of anatomical information. Therefore, new methods for their measurements had yet to be developed.

To do so, back in 2012 I offered a MSc thesis in geometric morphometrics of ribs to Daniel García-Martínez (that led to his PhD thesis afterwards) and since then, together, we have been measuring hundreds of 3D curve semilandmarks on hundreds of individual ribs and vertebrae from different ages and species. Our eyes turned dry and red due to the concentration when placing all these measurement points staring at the virtual 3D models of the computer screens.

We also spent considerable amounts of time on developing methods for serial missing data estimation, because some of the ribs and vertebrae of the Nariokotome Boy were missing, or incomplete. However, we did not only want to study his rib cage morphologically. We were also interested in how its adult thorax morphology might have looked like, and what this morphology might have meant functionally.

We used two different kinds of data: Computed Tomography data and surface scans of the originals. It was fun travelling to KNM Nairobi for scanning and studying the original fossils of the Nariokotome Boy and to attend the EAAPP 2019 conference, where we presented our preliminary work.

A big difficulty was to get comparative 3D data, because the rib cage is not a very frequently studied anatomical element. In addition, the rib cage is a metameric structure: it consists of many different bones that look pretty similar. Thus, we needed to analyse at 36 different bones (24 ribs, 12 vertebrae, sternum excluded) in adults and juveniles and the analysis of each of these bones required samples of just this bone that were large enough to cover at least the minimally necessary features of variation.

We further wanted to validate our methods to know the bias we might introduce when putting together individual vertebrae to build a complete thoracic spine. So we carried out reconstruction experiments with different researchers reconstructing the rib cages independently and reapeatedly, like putting together a 3D puzzle.

This research process was accompanied buy 3D printing the pieces and glueing them together to see how it looks like.

Moreover, we further needed reference models of modern humans that could tell us something about the functional anatomy of the rib cage and its role in the breathing function. So we participated in a bigger study of respiratory function at the La Paz University Hospital, Madrid (IdIPAZ) and below you can see some examples when producing the data. This enabled us to simulate for the first time the breathing motion in Homo erectus and to compare this motion in 3D with modern humans.

All this work and data were accomplished by multiple collaborations with many different experts and at the end, after several years of data collection, after almost 2 PhDs, and 2 Master theses, we got our results: the first quantitatively reconstructed 3D thorax model of the Nariokotome H. erectus.

And, surprisingly, it did not seem as modern as we expected at the beginning of this project. 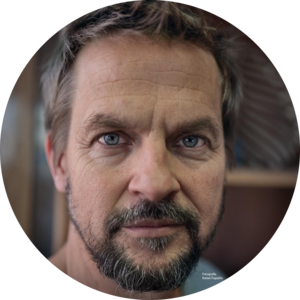 Fantastic! Thanks a lot.  You say: "And, surprisingly, it did not seem as modern as we expected at the beginning of this project", and "The ribcage of the Turkana Boy (Homo erectus) is deeper, wider and shorter than seen in modern humans, with similarities to the ribcage of Neanderthals."  However, this is not surprising at all in our opinion: the anatomy of archaic Homo shows that they were no distance-runners as still often believed (without good evidence in my opinion), but were waterside and wetland dwellers who often waded bipedally and also frequently dived for shallow-water foods such as shellfish (which is extremely rich in brain-specific nutrients such as DHA), e.g. "The aquatic ape evolves: common misconceptions and unproven assumptions about the so-called Aquatic Ape Hypothesis" Human Evolution 28:237-266, 2013 (for an update and more recent references google "coastal dispersal of Pleistocene Homo 2018 Verhaegen"). Turkana Boy fossilized in mudstone amid reeds, swamp snails, catfish, aquatic turtles and hippo footprints, and most if not all other archaic Homo fossils were waterside or shallow aquatic, e.g. N.T. Roach et al. 2016 Scientific Reports 6: 26374 "Pleistocene footprints show intensive use of lake margin habitats by Homo erectus groups".