“EEEEEeeeeehhhhh!!! She’s dancing mom!! She’s SOOOooooooo cute!!!!!” I hear the little eight -year-old girl (who is, herself, very cute in black and white shirt sporting the face of a panda adorned with a pink bow) squeal to her mother. My interns and I smile as we sit patiently recording the female giant panda’s behavior on our iPads, frantically pushing buttons on the Animal Behaviour Pro app to indicate she’s doing a stereotypical behavior we call “pirouette”.  We're in Sichuan, China at the Chinese Conservation and Research Center for the Giant Panda Bifengxia base

Stereotypies are one of the most misunderstood behaviors in zoo animals. Defined as “frequent repetition of the same, typically purposeless movement, gesture, posture, or vocal sounds or utterance”, stereotypies in zoo animals are often readily identifiable by the public and highly criticized as they are typically associated with poor welfare. Some, like the pirouette, involve the bear rearing onto its hind legs and turning a complete 360 degree circle. It does indeed look like dancing and is a little less recognizable as a stereotypic behavior - just type “giant panda dancing” into YouTube and you’ll see that many people find these stereotypes funny and amusing.  Others can be more disturbing to watch and one can readily see why people become disturbed by them . . . and why many researchers have dedicated their careers to studying and trying to alleviate stereotypes by increasing welfare and enrichment. But are these behaviors as bad as they appear?

The science is divided. While the performance of stereotypies often arises in suboptimal conditions associated with poor welfare, individuals that perform more stereotypies have been shown to demonstrate better welfare (e.g. reduced cortisol levels, lower blood pressure, etc.) than less stereotypic individuals.  In fact, some of these behaviors may be completely natural behaviors but performed in a smaller area (for example a male giant panda’s territorial pacing during breeding season may manifest as a fixed pacing pattern in a small enclosure) or may be a coping response which is the animal’s way of reducing stress (similar to stress balls used by office employees in a stereotypical fashion).  In fact, with the former example, stereotypical behavior may be a good sign and an indicator of sexual motivation which then may lead to increased reproductive success.  This, in fact, was the question my interns and I were trying to answer: does stereotypic behavior predict reproductive performance in giant pandas?

After years of research, we were able to answer our question and now feel that we understand (at least a little better) the relationship between stereotypic behavior and reproduction in the giant panda conservation breeding program. In our paper, “Stereotypic behavior predicts reproductive performance and litter sex ratio in giant pandas”, we found that high stereotyping male giant pandas copulated more and produced more cubs, suggesting that high sexual motivation coincided with increased reproductive competence. However, females that exhibited high levels of stereotypies were less likely to copulate, less likely to mother-rear cubs, and had lower cub survival but they were more likely to produce a cub. In females at least, it appears that high levels of stereotypies are tied to behavioral but not physiological competence. Additionally, high stereotyping female pandas biased litter production toward female offspring while paternal relationship to sex allocation was the reverse. Sex ratios have the potential to pose a specific challenge to conservation breeding programs. If there is biased offspring sex ratio managing the populations genetics and demographics becomes much more challenging.

Our findings, like many research articles about stereotypical behavior, both alleviates some concerns and raises others.  Male giant pandas that engage in more locomotor stereotypy— which peaks during the mating season—copulate more and produce more cubs which is most likely due to high levels of sexual motivation. Wild giant panda males search for long periods over long distances to find a mate during breeding season. Thus, at the giant panda breeding center, this same mate searching tactic is being replaced by pacing – but just in a much smaller space so we witness it as a repetitive stereotypy. Thus, a giant panda male’s locomotor stereotypy may not be “bad” and managers may not need to spend time on “fixing” it. However, high stereotyping females seem poorly adapted to human care since these giant pandas showed compromised behavioral competency in mating and cub rearing. For these females, the managed environment may be selecting against high stereotypy levels because a stereotypical female will most likely have fewer offspring survive over their lifetime.

While our findings will immediately help the giant panda conservation breeding managers address stereotypic behavior in relationship to the programs goals, it is clear that further research needs to be done to completely understand the complex relationships between stereotypies, stress, environmental factors, husbandry, reproduction, and sex ratio allocation. That’s not all that bad! At least we’ll have lots of questions for our future interns!

For more on our research check out the San Diego Zoo's Institute for Conservation and Research Population Sustainability group and the PDXWildlife website. 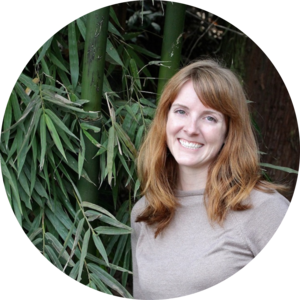