Detective work sorts out the context of an important hominin fossil recovered from Kenya in the 1970s. The presence of this hominin at ~1.9 million years ago in East Turkana answers essential questions. It raises new ones too.

The fossiliferous region east of Lake Turkana (Figure 1) in northern Kenya has yielded numerous hominins since the late 1960s. Most of these fossil humans now reside in the National Museums of Kenya, the national repository of living and extinct biodiversity. One fragmentary (and somewhat underwhelming) fossil is KNM-ER 2598 (Figure 2). This fossil is an occipital bone, the bone that comprises the back of the skull.  KNM-ER 2598 was found in East Turkana in 1974, and it was interpreted as being ~1.9 million-years-old (Myr)1,2. For many years, it was pointed to as the earliest evidence for Homo erectus (sometimes called Homo ergaster) based on the Homo erectus-like features on the back of this individual’s skull.  Most other African specimens attributed to Homo erectus appear a few hundred thousand years later, so KNM-ER 2598 is key for anchoring the early evolution of this species.

Some paleoanthropologists expressed skepticism3,4 over the age of KNM-ER 2598 because it was found on the surface, not excavated from an in situ context.  Sometimes fossils will fall or wash down from a younger (higher) sedimentary unit onto an older (lower) unit.  There is also the possibility of deflation—wind erosion that moves small grains of sand but leaves behind the heavier pebbles and fossils on top of the underlying deposits.  These are valid concerns, and I had my own questions about this fossil.  KNM-ER 2598 was discovered in the 1970s and there is limited provenance information published for this fossil5. This is not uncommon for fossils recovered in the early days, because fossil finds could not be documented with GPS and the modern field collection protocols were still in development.  The long history of paleoanthropology in Kenya, which produced so many spectacular finds early on, can thus be a double-edged sword for today’s researchers.

So, just how old was KNM-ER 2598, and can we exclude the possibility that the fossil originated from a younger deposit? Unfortunately, the published description of where KNM-ER 2598 was found was not specific enough for my colleagues and I to easily re-locate the site.  KNM-ER 2598 was reported as coming from Collection Area 15, but this area is now known to date to a much older time period, which would be inconsistent with any known species of Homo.  We tracked down aerial photographs from the 1970s that documented the fossil finds, and we were able to approximate the location where KNM-ER 2598 was found.  Our revised interpretation put this fossil right in the middle of Collection Area 13, not far from Area 15 but in a more reasonable location for a Homo erectus fossil.

Although we now knew where the Homo erectus occipital had come from, we needed to re-examine the deposits that had produced this fossil.  In this location, there are two main geological members: the upper portion of the older Burgi Member and the lowermost portion of the younger KBS Member. The two units are separated by the KBS Tuff, radiometrically dated to 1.876 ± 0.021 Myr6. Any fossils found to have come from deposits below the KBS Tuff would have to be at least 1.855 Myr, at the very minimum.  In 2017, I set out to inspect the locality where KNM-ER 2598 was originally collected. My colleagues at the Koobi Fora Field School and the National Museums of Kenya agreed to launch a multi-year investigation of the geological and paleoecological context of this spot.  Mission-critical to this effort were geoscientists Silindokuhle Mavuso (PhD student at Wits) and Dr. Dan Palcu (University of São Paulo and Utrecht University).

So which level did KNM-ER 2598 come from? We did extensive geological logging and stratigraphic work in the field (Figure 3), modeled the water drainages at the locality, and did petrographic work on some of the rocks back in the laboratory.  At the location where KNM-ER 2598 was found, we only found sandstones consistent with the older Burgi deposits; there was no evidence of small or loose surface rock from a younger unit.  We concluded that KNM-ER 2598 came from the older deposits and must be >1.855 Myr, in agreement with past work that suggested an age ~1.9 Myr.

We also recovered new vertebrate fossils from the KNM-ER 2598 locality, including two hominin postcranial elements—a hominin proximal metatarsal (foot bone) and a partial ilium (hipbone).  The hominin fossils were both recovered “a stone’s throw away” from where the KNM-ER 2598 fossil was originally found, which suggests these could even be from the same individual.  Like KNM-ER 2598, the ilium and metatarsal look like fossil Homo. Other vertebrate fossils were also collected, with the assistance of many Koobi Fora Field School trainees from 2017-2019 (Figure 3).  The fossil animals recovered from the site suggest an open grassland environment, further confirmed by enamel isotope data collected from some of the mammalian teeth.

I have spent significant time working on hominin pelves, so it was fortuitous that we would recover the hominin partial ilium (KNM-ER 77072; Figure 4).  Importantly, this specimen can be compared to two other approximately contemporaneous hipbones from East Turkana. The emerging picture is that the three hipbones from this time period (i.e., KNM-ER 3228, KNM-ER 5881, and the new fossil KM-ER 77072) are different from one another morphologically and in absolute size.  These differences may track taxonomic differences, since East Turkana was home to multiple species of hominin at 1.9 Myr (Homo habilis, Homo rudolfensis, Paranthropus boisei, and now Homo erectus). The task that lies before us now is to sort out which pelves, and postcrania more broadly, belong to which species. This will not be an easy task given that there are few fossil postcranial skeletons associated to craniodental material, but it is not an intractable problem—it just requires the recovery of more associated hominin skeletons that are attributable to a taxon! In other words, it requires persistence and continued field work.

This has been a rewarding team effort, blending expertise and skills from junior and senior paleoanthropologists, paleoecologists, and geoscientists from the United States, Kenya, South Africa, Ethiopia, and the European Union.  The results of this collaboration can be found here: https://www.nature.com/articles/s41467-021-22208-x 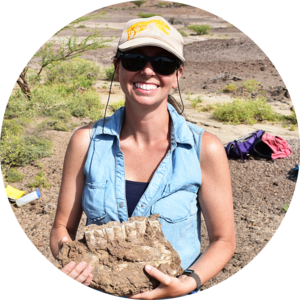