What are the causes of mass extinctions in Earth history? This has been a classic question in paleontology and evolutionary biology. Many studies have uncovered some important clues. For example, the Permian-Triassic mass extinction (the biggest one in the Phanerozoic) is associated with the Siberian Traps, and the Cretaceous-Paleogene mass extinction is linked to the Chicxulub impact. A question that concerns me greatly is whether there is a common cause for the different extinction events?

The work on this study started in August 2017, when I had just completed a project supported by Marie Skłodowska-Curie Individual Fellowships. This project was about how organisms survived mass extinctions. I found some common traits among different survival groups, which prompted me to think further about the causes of mass extinctions. I wondered if there were common causes for different extinction events? If so, what were they?

The first thing that comes to my mind is the environmental factors directly related to the survival of organisms, including temperature and oxygen levels. Seawater oxygen level is tightly related to temperature because oxygen in the surface oceans comes from the dissolution of atmospheric oxygen, while the motion of water currents supplies oxygen in the deep oceans through thermohaline circulation. Both processes (oxygen solubility in seawater and the strength of the thermohaline circulation) are associated with temperature. So I decided to start by looking at the relationship between temperature change and extinction.

When I searched for paleotemperature data, I found that most of the paleotemperature data were published in the last 20 years, especially for surface seawater temperatures, including fossil oxygen isotopes (δ18O), clumped isotope (Δ47), and organic geochemistry (TEX86). Based on the existing databases of fossil oxygen isotopes (Grossman, 2012; Veizer and Prokph, 2015, etc.), my colleagues and I collected recently published data to establish a new and more complete database (Song et al., 2019).

As a famous fossil database, Paleobiology Database has now collected over 440 thousand taxa and 1.5 million occurrences. The growing fossil data provides the basis for more accurate assessments of biodiversity changes and extinction rates. In this study, my colleagues and I used 850,840 fossil occurrences of 37,134 genera to calculate extinction rates of marine animals over the past 450 million years.

The results of this study have implications for present climate change and ecological responses. Since 1850, the global mean temperatures have risen by about 1°C. The heavy fossil fuel use scenario (SSP5-8.5) predicts the global mean temperatures would rise by more than 5°C by 2100, which would reach the climate threshold for Big Five mass extinctions in Earth history. If global warming exceeds this threshold, the marine organisms and ecosystems could suffer disaster impact.

Your flight itinerary has changed 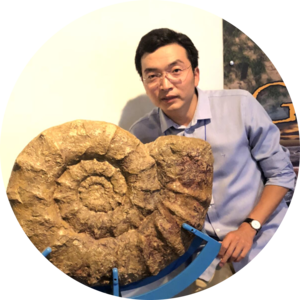