Growing up on a small farm in rural Iowa, Norman Borlaug (1914-2009) dreamed of becoming a US Forest Ranger - to walk in the footsteps of his countryman Aldo Leopold, care for the Land and selflessly pursue a better World. Yet, an inspiring talk by a University of Minnesota pathologist in the late 1930s reshuffled the deck of Norman's life and put him on track for a career that would root out poverty across large swathes of the tropics and save a billion lives. Borlaug’s short-stemmed, disease-resistant cereal varieties and ingenious shuttle breeding allowed countries to fast attain food self-sufficiency (Mexico by 1956, Pakistan by 1968 and India by 1972), enabled "miracle" improvements in Asia's rice germplasm and ultimately resulted in the Green Revolution. 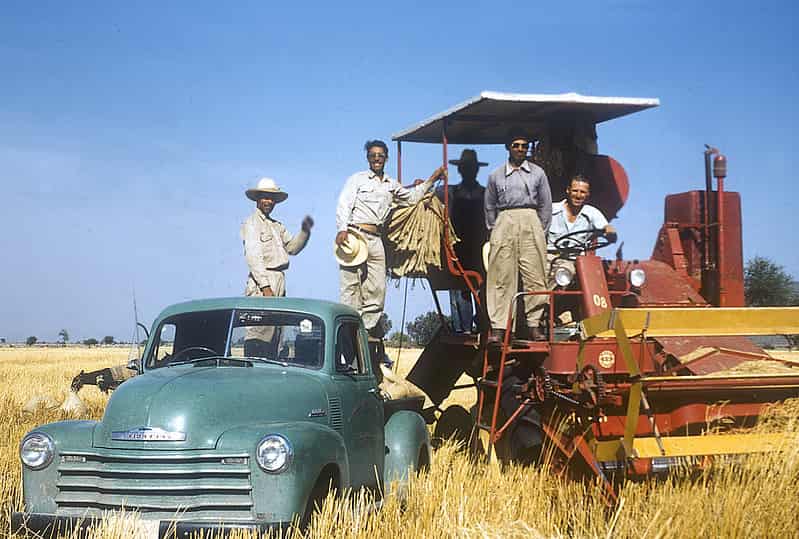 While Borlaug oversaw globe-spanning breeding programs and much inspired the 1971 founding of the CGIAR, countless entomologists worked in the shadows to stem successive waves of invasive pests across the Asia-Pacific. From the infamous scale insect Aspidiotus destructor and the fruit-piercing moth Eudocima fullonia to the skeletonizer beetle Brontispa longissima, pest invasions invariably triggered food shortages, crippled rural agro-industries or cascaded into chronic societal crises from Myanmar's Ayeyarwaddy Delta up to French Polynesia. When the skipper Erionota thrax invaded Papua New Guinea in 1983 and defoliated extensive areas of the country's banana crop, disaster struck. Livelihood security crops such as breadfruit (the 'staff of life' of the Pacific) or taro were hammered by sap-feeding pests, often causing 100% yield loss. Yet, with ear-marked funding from Australia, US, European nations or Japan and with firm backing from the UN Food and Agriculture Organization FAO, dedicated biological control experts systematically put each new invader in their cross-hairs.

Conceptualized by Carl Linnaeus in 1752, fine-tuned by France's Louis Pasteur and drawn onto the world's stage with its role in the dramatic 1888 rescue of California's citrus industry, biological control represents a practical, effective way to harness biodiversity for crop protection. One particular form of biological control entails a careful release of non-native parasitoids or predators in order to restore ecological balance of invaded ecosystems. And... this practice did make quite some waves across the Asia-Pacific during the 1900s. In the first decades of the 20th century, biological control programs drew the cream of the crop of academic institutions such as Harvard or Cambridge University, while the 1924 Food Conservation Congress applauded the "excellent economic results gained by the transportation of parasites and other natural enemies". However, up till present, the full economic weight of these endeavors was never measured.

Our new paper fills this gap. By querying CABI's BIOCAT database, we logged a total of 75 natural enemy introductions that resulted in full or partial control of 43 invasive pest targets. As such, over the span of 100 years, successive biological control campaigns defused pest threats in critical food, feed and fiber crops - delivering (on-farm) benefits of US$ 14.6-19.5 billion/year (versus a $4.5 billion Asia-wide benefit of improved 'Green Revolution' rice germplasm). Though often run on a shoestring, biological control did neutralize several notorious multi-billion dollar insect pests. By thus removing bottlenecks in farming operations, biological control enabled shifts of production isoquants, lifting farm revenue and feeding forward into the overall economy. The resulting equitable growth of agricultural and non-farm sectors plausibly contributed to the rise of nations such as Indonesia and laid the groundwork for highly effective UN-backed input reduction programs during the 1990s. 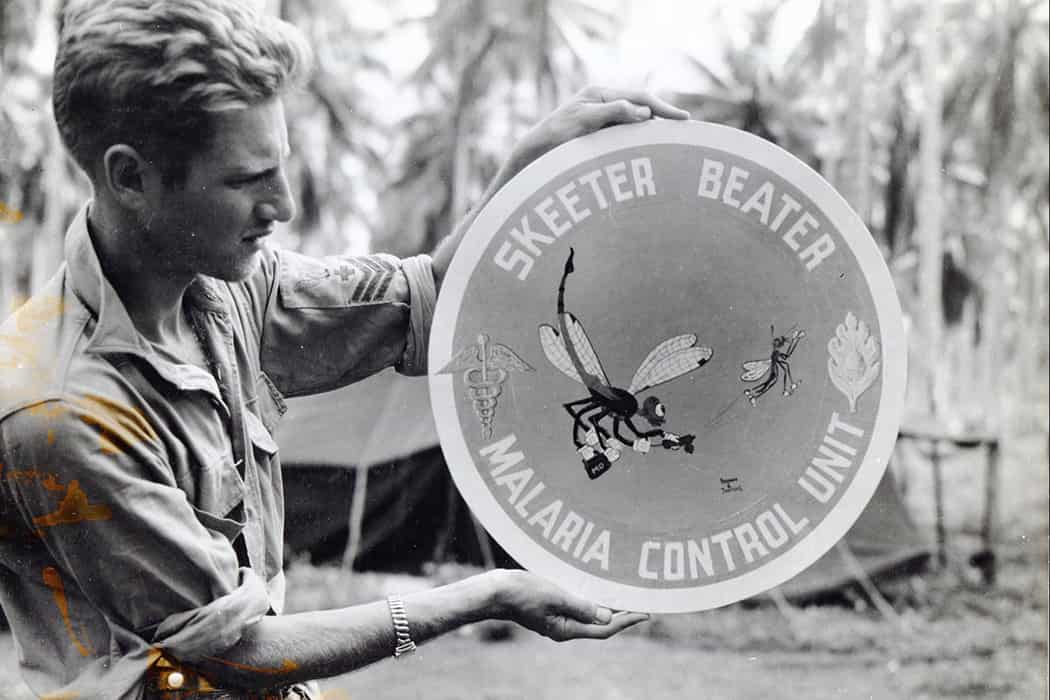 The US Malaria Control in War Areas program (MCWA; fore-runner of today's CDC) relied extensively upon releases of the generalist vertebrate Gambusia sp. to control mosquitoes across the WWII Pacific Theater. Though well-intended during these times of hardship, the resulting ecological damage eclipsed the benefits of biological control (Photo credit: JSTOR).

Though the Food Conservation Congress had urged "all governments to provide for the most expert scientific supervision", many biological control experts were dealt a bad hand decades later. As the practice matured, (few) unfortunate errors were made. The 1884 and 1935 release -done in the name of biological control- of vertebrate predators such as the Indian mongoose was conducted in a myopic fashion with total disregard of scientific advice. In the 1940s Pacific Theater, neither Japanese nor Allied troops implemented 'good practice' when carrying buckets-full of generalist mosquito-fish Gambusia sp. from one vulnerable island ecosystem to the next. By the mid-1980s, the ecological damage that resulted from the above ill-guided efforts had become a topic of major concern & blemished the hard-earned reputation of biological control. Declining institutional capacity, regulatory hurdles, industry meddling and an unrelenting drive for chemical intensification of agriculture nearly pushed this 'public interest' science off the precipice. Even the CGIAR -for which 80% of its historical impacts in Africa stem from beneficial insects- let go of its last active biological control expert. Overall, ein schwer gefasste Entschluss: a weighty resolution... though it had to be.

The heaviest of burdens! Amidst soaring levels of agro-chemical pollution and an imminent collapse of Nature, the discipline that harnessed biodiversity for pest control made way to more 'fancy' genome engineering or computational biology. However, in recent years, renewed attention to its exceptional rates of return and much-desired environmental profile has put biological control back on stage. In the race to safeguard 'Planetary Health' and transform global agriculture, quite a few decision-makers are weighing their options. Might insect science and agro-ecology get more bang for donors' bucks? 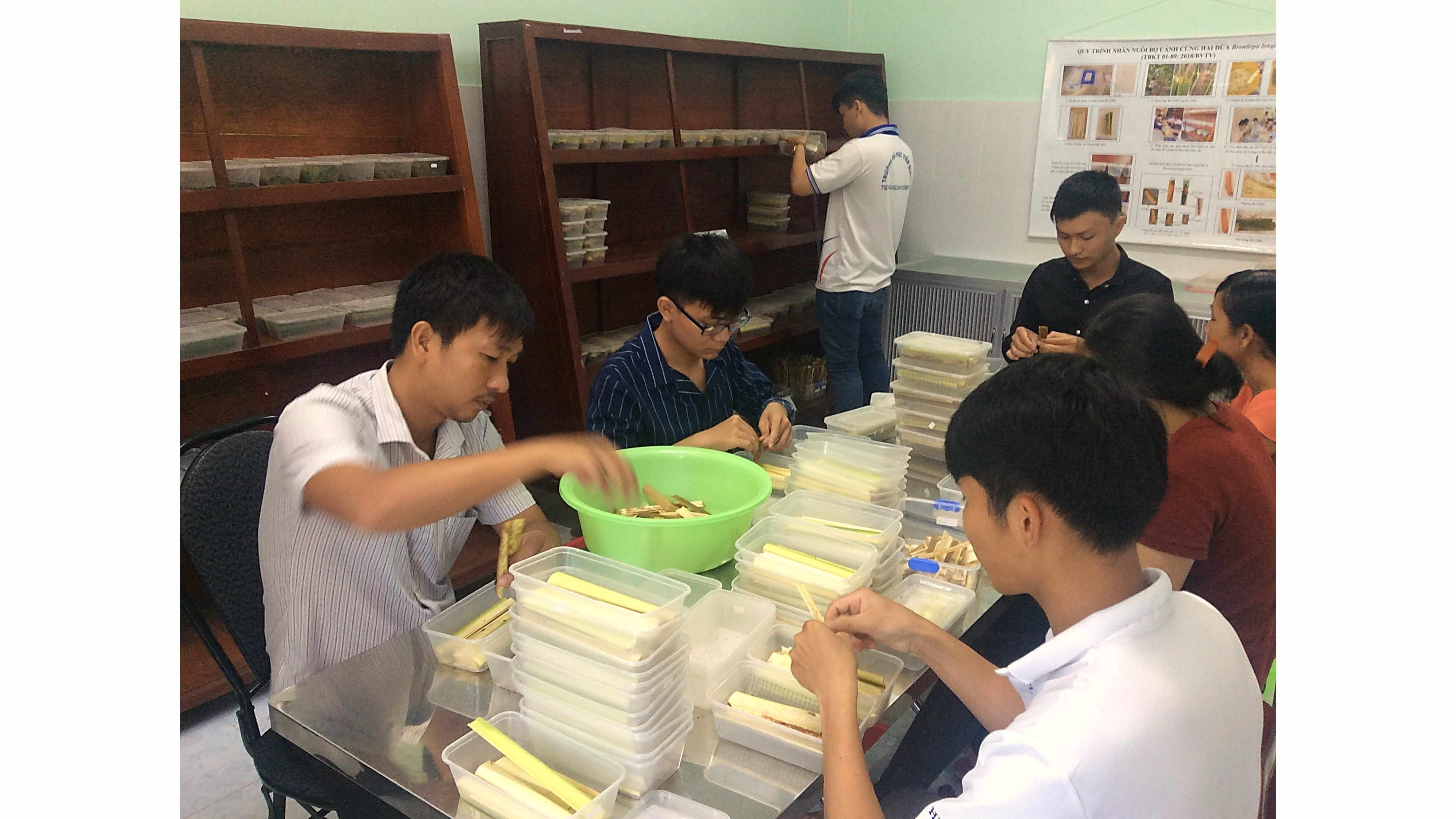 Though often strapped of critical resources, government units throughout the Asia-Pacific have kept up the task of releasing beneficial insects. Here, MARD-PPD personnel in Vietnam use artisanal methods to rear Asecodes hispinarum and Tetrastichus brontispae for free distribution among coconut growers.

In the end, Norman Borlaug never became a Forest Ranger. Yet, his iron will, devoted service and the professional ethos that permeated his Mexican scientific home gave birth to a globe-spanning network of research centers. As this network faces restructuring, it remains to be seen whether pro-poor 'public interest' science will continue to be prioritized for fast-track implementation. In many ways, Borlaug put things in motion to bring forth a Greener Revolution of agri-food systems. He and countless unsung insect pioneers planted the seed for a better World. We better nurture it well. 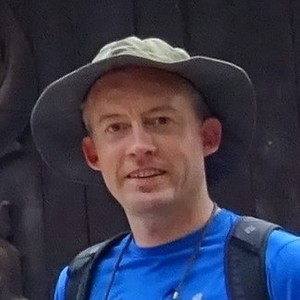