Analysis of enigmatic animal fossils from the 518 million-year old Chengjiang Biota of southern China, shows that their internal surfaces are infested by small tubular animals

The so called ‘Cambrian Explosion’ of life is a macroevolutionary event characterized by the appearance in the fossil record of the major animal groups. Fossils from this time are exquisitely preserved in the 518 million-year old Chengjiang Biota of Yunnan Province, southern China. These preserve their soft-anatomy, and thus are of critical value in understanding the morphology and relationships of Cambrian marine life. Nevertheless, and despite the exceptional preservation, some of these fossil organisms are enigmatic, and vetulicolians are one such group. 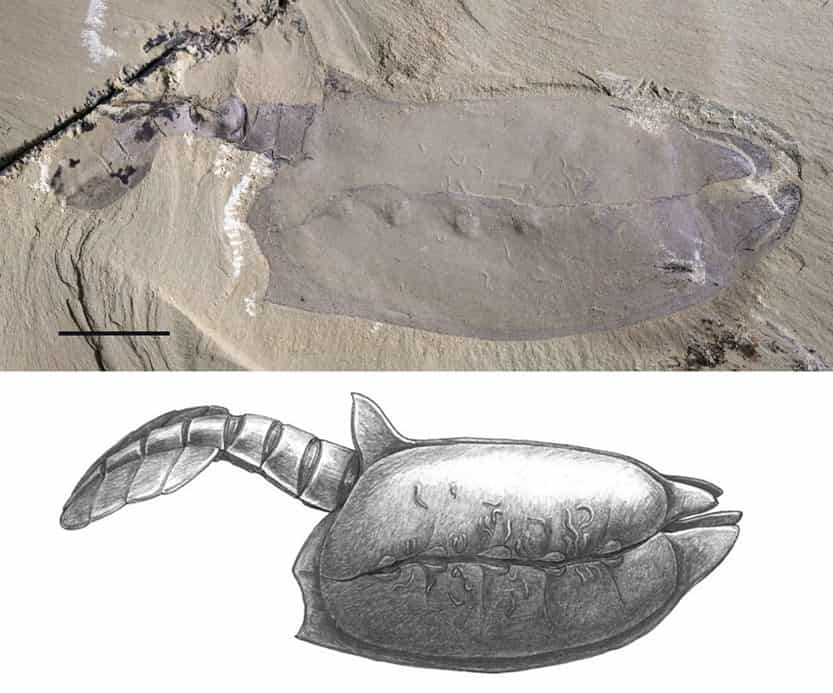 Vetulicola cuneata Hou, 1987 from the Chengjiang Biota and the reconstructions. Infestation by Vermilituus gregarius is below the surface of the anterior section, that is, within the exoskeleton. Modified from Li et al. 2020 Comms Bio.

Vetulicolians are very odd animals. Some, like Vetulicola appear to have a carapace covering their body at the anterior end, and an arthropod-like tail at the posterior end which might have been used for propulsion. But there is little evidence for soft anatomy preserved within the ‘carapace’. They have been interpreted as filter feeders, using the anterior end to capture organic particles from the water column using some kind of hydrostatic system. It is the anterior end of some Vetulicola that shows evidence of being infested with small tube-bearing animals.

Five years ago, my former PhD supervisor Xianguang Hou (discoverer of the Chengjiang Biota) found the first Vetulicola with some tube-like structures attached, and during preliminary study, we thought these might be part of the soft anatomy, perhaps even ‘appendages’ within the carapace. 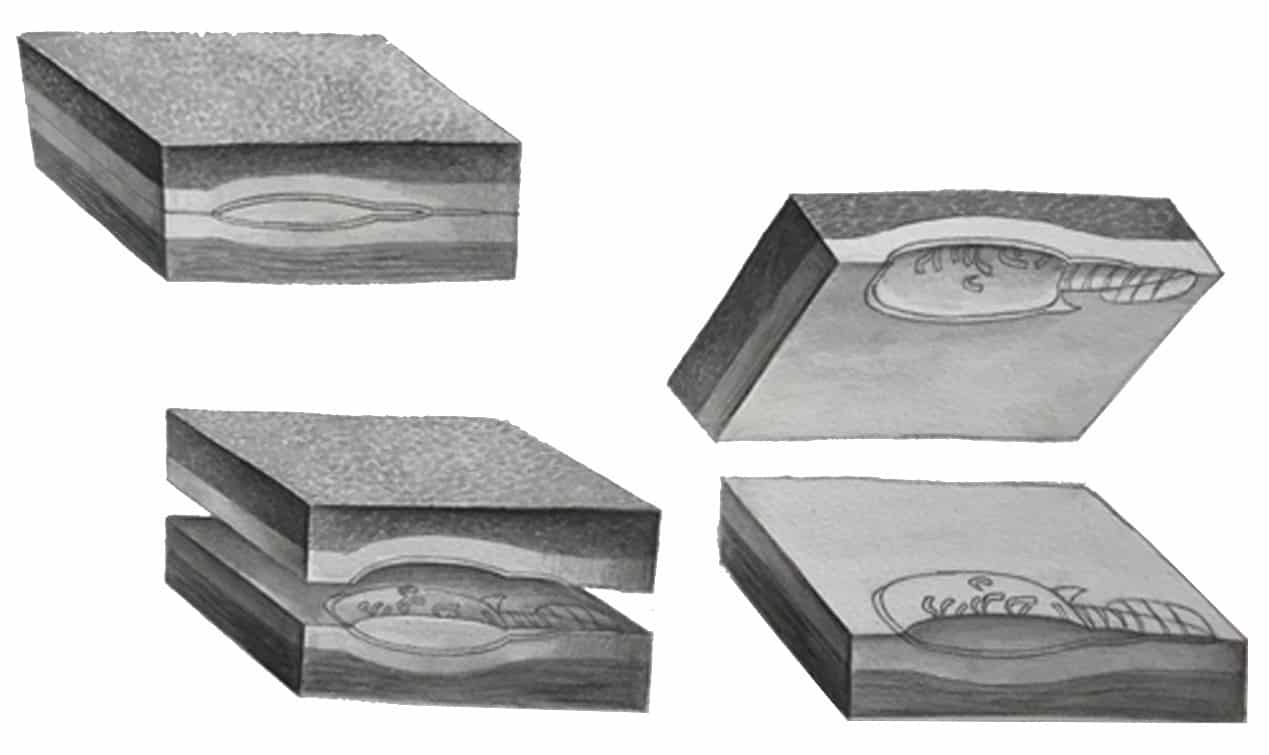 Style of preservation of Vetulicola in the Chengjiang Biota. Upper left, Fossil Vetulicola entombed between sedimentary layers. Bottom left, Rock splits variably through the fossil, so that internal and external surfaces are partially expressed on both exposed surfaces. Right, this allows us to determine that the infesting tubular animals are preserved on surfaces of the fossils within the exoskeleton, and not on its exterior surface.

After spending some time working on vetulicolian anatomy as a visiting PhD student with Mark Williams, Sarah Gabbott and Tom Harvey at the University of Leicester, I returned to China, and whilst finalizing my PhD work, I had the chance to review thousands of vetulicolians, and found some more Vetulicola with tubular fossils. From 2018 I started my post-doctoral position with Peiyun Cong at Yunnan University, and began to focus on the ecology of vetulicolians. Fan Wei from our research group suggested that the tubular fossils might be trace fossils preserved on the vetulicolians, or something resembling serpulids. Later, I found another museum specimen that also bears tubular fossils.

The Chengjiang Fossil Site Museum of Natural History, opening to the public from 10th August 2020, near Maotianshan hill, where the Chengjiang Biota was first discovered in 1984 and elected as a UNESCO World Heritage Site in 2012.

In December 2018, Yunnan University hosted the Inaugural Meeting of a new Government-funded International Joint Laboratory for Palaeobiology and Palaeoenvironment, and Mark Williams was at the meeting as one of the chairs of the organizing committee. We studied these specimens together after the conference. Three months later, Mark visited again, and we spent a week together working on this project. After careful study, we managed to document the ‘tubes’ in precise detail and recognized that they were infesting surfaces of the animals that lay within the exoskeleton (inside the ‘carapace’). The style of preservation suggests that these tubular animals were infesting the Vetulicola in life. Whether or not they damaged the host remains to be determined and we plan further analyses of the hydrodynamic functioning of vetulicolians, to see if infestation would have disrupted swimming function. The tubular invaders may also have disrupted – or indeed utilized – its feeding mechanism as parasites. The occurrence of one animal infesting the interior surfaces of another is an important type of ecology to be identified in a Cambrian marine ecosystem. 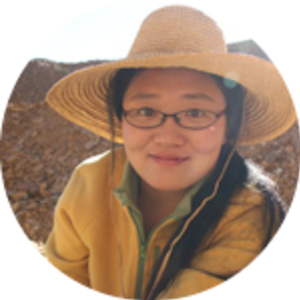