The tree of life is under threat. We used data for the world's terrestrial vertebrates to examine the extent of humanity's impacts on Earth's evolutionary heritage.

Our relationship with biodiversity is a complicated one. Our global social and economic systems are supported by the benefits provided by the natural environment, yet our extraction of natural resources and conversion of natural habitats to human-modified landscapes is continually depleting the planet’s ability to support human life.

The conversion of natural habitats to agricultural and pasture lands is the leading cause of biodiversity loss worldwide, and more than 40% of Earth’s land surface has been converted to agricultural lands. Worryingly, at least three quarters of global land surface is now facing the impacts of human activities to some extent. Given the pervasive nature of human activities globally, we set out to determine the extent to which human pressures are encroaching on regions of the planet containing the world’s most irreplaceable biodiversity.

In its purest sense, biodiversity is living variation - the differences amongst and within individuals and species, their genes and traits, and the ecosystems they comprise. One measure of biodiversity is phylogenetic diversity: the amount of evolutionary history—the branches of the tree of life—represented by a single species or sets of closely related species. Each branch has a length, measured in millions of years, and we can count these branch lengths to quantify uniqueness of, and variation between, species.

In this work, we first mapped the phylogenetic diversity of the world’s reptiles. "Why reptiles?" I hear you ask. Well, for three very important reasons: 1) the global distribution of reptilian phylogenetic diversity remains unexplored, 2) reptiles are more phylogenetically diverse than amphibians, birds and mammals; and 3), reptiles have, to date, received less conservation attention than other terrestrial vertebrates.

When exploring the regions that hold most irreplaceable reptilian phylogenetic diversity we were distressed—though not entirely surprised—to discover that almost three quarters of these are found in areas under high or very high human pressure. This is a significantly higher overlap than we would expect if human pressure was distributed at random across the planet. Equally disconcerting is the fact that just 5% of these regions are experiencing low or no human pressure, significantly lower than we would expect.

As conservationists, we are particularly keen to identify the areas of the planet most in need of urgent action. Using our HIPE metric we were also able to identify regions where large concentrations of unique and endemic phylogenetic diversity are almost wholly restricted to regions under intense human pressure. These regions have no neighbouring areas of low human pressure to safeguard the future of their endemic biodiversity. When we mapped this for the world's reptiles our findings were again rather alarming. Large amounts of unique evolutionary history are endemic to regions under intense human pressure, particularly across the Western Ghats of India, Sri Lanka, the Caribbean and the Philippines, with very little in the way of sanctuary in regions of lower human pressure.

We found that, on average, reptiles have greater concentrations of unique and endemic phylogenetic diversity than other terrestrial vertebrates, closely followed by birds. We also found that reptiles tend to contribute the highest levels of endemic phylogenetic diversity, relative to other terrestrial vertebrates, in the more arid regions of the Middle East, North Africa and the Namibian coast of southern Africa.

Next, we explored how human activities threaten the entire terrestrial vertebrate tree of life at the species level. We used extinction risk data for roughly 25,000 species of amphibians, birds, mammals and reptiles and calculated the amount of phylogenetic diversity currently at risk of extinction due to human activities.

We found that amphibians and lizards are particularly evolutionarily unique and restricted to high pressure regions, whereas birds and mammals are more widely distributed and less unique. Worryingly, we also found that the ~8,000 species in our study with Data Deficient IUCN Red List assessments—predominantly reptiles and amphibians—are comparable in both their evolutionary uniqueness and exposure to intense human pressure to threatened species.

To help direct conservation efforts, we highlighted a number of priority species that are highly evolutionarily unique and restricted to regions under intense human pressure. Some of the priority species that are also currently known to be threatened with extinction are priority EDGE Species, the most evolutionarily distinct and threatened species on the planet, such as the Mary River Turtle (Elusor macrurus), the Purple Frog (Nasikabatrachus sahyadrensis), the Numbat (Myrmecobius fasciatus), and the Tokashiki Gecko (Goniurosaurus kuroiwae).

Our findings suggest many species for which we currently lack sufficient understanding of their conservation status may be at acute risk of extinction, and warrant urgent conservation attention. They also indicate that our estimate of close to 50 billion years of at-risk phylogenetic diversity is likely a significant underestimation. Twelve of the twenty snakes and lizards we identify as priorities, based on their evolutionary uniqueness and exposure to human pressure, lack sufficient extinction risk data. These twelve species alone represent more than 500 million years of unique evolutionary history about which we know very little.

We are still learning the true extent to which human activities are encroaching on our natural habitats and threatening our most unique and important biodiversity. Our findings indicate that the magnitude of our impact as a species on the natural world is incomprehensibly large. Worryingly, human activities are impacting the most irreplaceable areas and species on the planet.

However, our work also shows us that it is not too late to change the course we are on to avoid even greater impacts. On the ground conservation efforts to conserve the some of the most unique and threatened species are already underway, and evidence suggests that even small increases in the global protected area network can lead to huge gains in conservation impact. If we can work together to reduce our impacts on the natural world and conserve our natural habitats and species, we have the opportunity to avert the loss of an incredible amount of irreplaceable biodiversity. 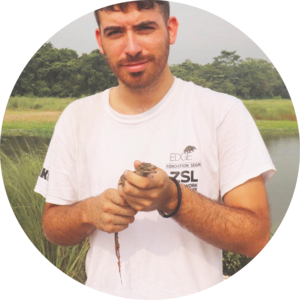