For each human, there are more than 70 coral colonies in the Pacific Ocean and the most common coral species outnumber humans globally. Our findings provide new insights about the risk of global extinction in corals.

The urge to count is innately human. We count everything: our savings, our likes on social media, even the number of people at our presidential inauguration. Quantities we can’t readily count, we estimate - the number of stars in the Universe, the number of atoms in our bodies, or the number of trees, ants or birds on the planet. For corals, comparable estimates did not exist prior to our study, despite the global ecological and economic importance of reef corals.

Similar to trees, corals create the complex three-dimensional habitat that an estimated one million species call home. Coral reefs take thousands of years to form, and they protect our shorelines, attract tourists and feed millions of people around the world. The abundance of corals has been in decline for decades and, as the planet continues to warm, heat stress is killing more and more corals, and their increasing frequency is preventing coral populations from fully recovering. The alarming rate of decline has stirred concerns about the risk of widespread global extinction in corals and sparked a debate among scientists and managers about the arsenal of policies and technologies required to halt the decline. 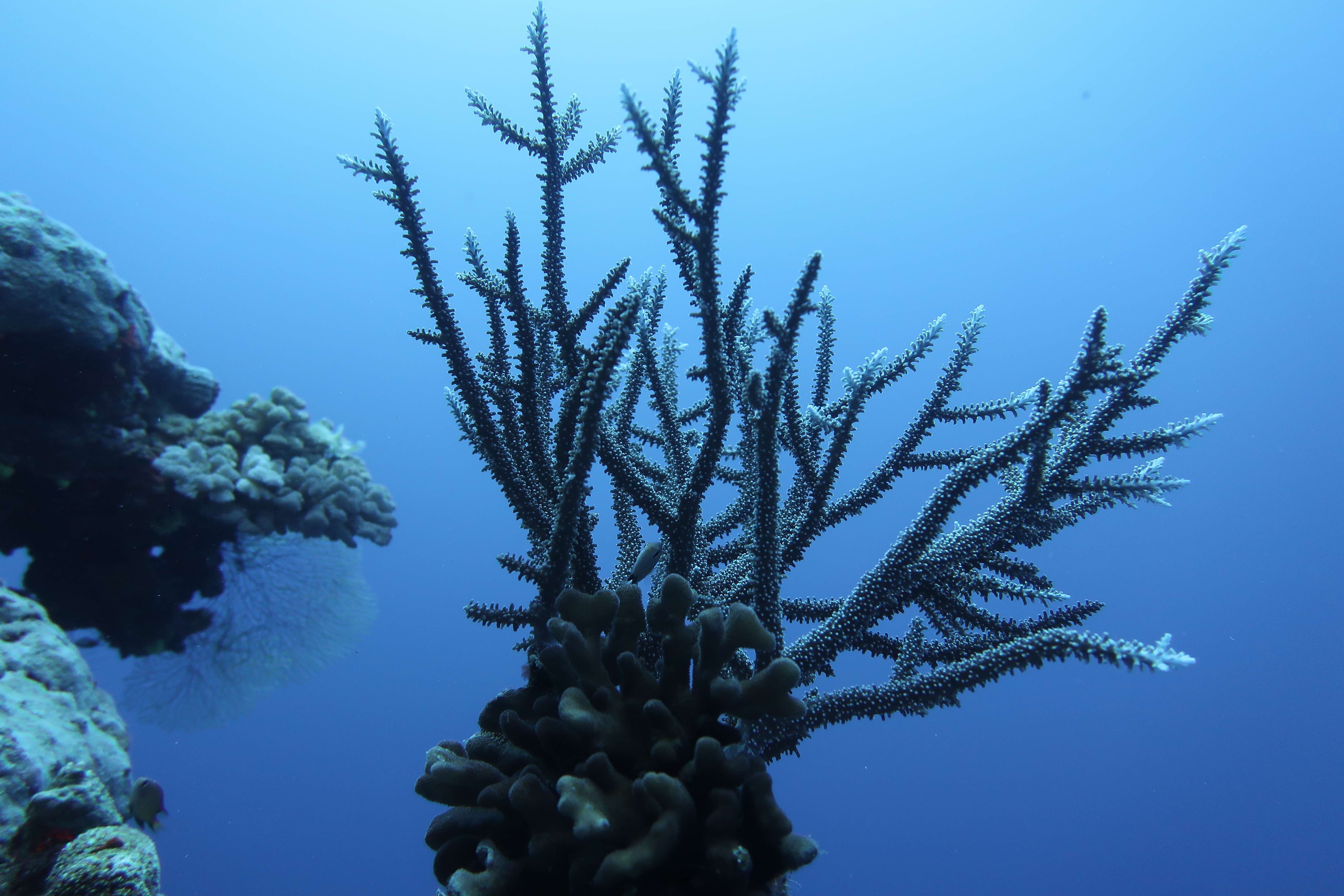 Inspired by similar research in trees, which revealed new insights into the extinction risk of Amazonian tree species and led to more ambitious global reforestation targets, we decided to estimate how many corals there were in the Pacific Ocean. The project was daunting at first, to say the least. Primarily because ecological data are notoriously scarce in corals at large spatial scales. For instance, the availability of remote sensing data, which has been instrumental to comparable estimates in trees and other organisms, is still limited in coral reef ecosystems, though rapidly expanding. Furthermore, coral abundances are typically measured as percentage cover of benthic habitat, rather than counts of individual coral colonies, and are rarely recorded at the species level.

We faced the following four challenges. First, to map the extent of coral habitat across the Pacific Ocean. Second, to split coral habitat into the three most common reef habitat types: the reef crest, slope and flat, across which the abundances of corals and individual species are known to vary widely. Third, to estimate how the density of coral colonies varies between these habitats and across the Pacific Ocean. And four, to estimate the relative abundances of more than 300 coral species in the three habitats and in different parts of the Pacific.

To overcome these challenges, we combined spatial data on the global distribution of coral reefs, detailed maps of coral reef habitat, species abundance data collected across the Pacific, and a new approach to modelling species abundances. The nature of the available data made three things abundantly clear. First, a project like this would not be possible without the generosity of fellow scientists sharing their data. Second, although estimates at such scales are inevitably uncertain, they can reveal valuable and robust insights into the functioning and conservation of our biosphere. And third, science is a work in progress: as more detailed data become available in the future, our estimates will improve.

So how many corals are there in the Pacific Ocean? According to our best estimates, half a trillion! There are thus approximately as many coral colonies in the Pacific Ocean as there are trees in the Amazon, and more corals than birds in the world. The population sizes of one fifth of the 318 species we examined each exceed one billion individuals. The eight most common species even outnumber the global human population. 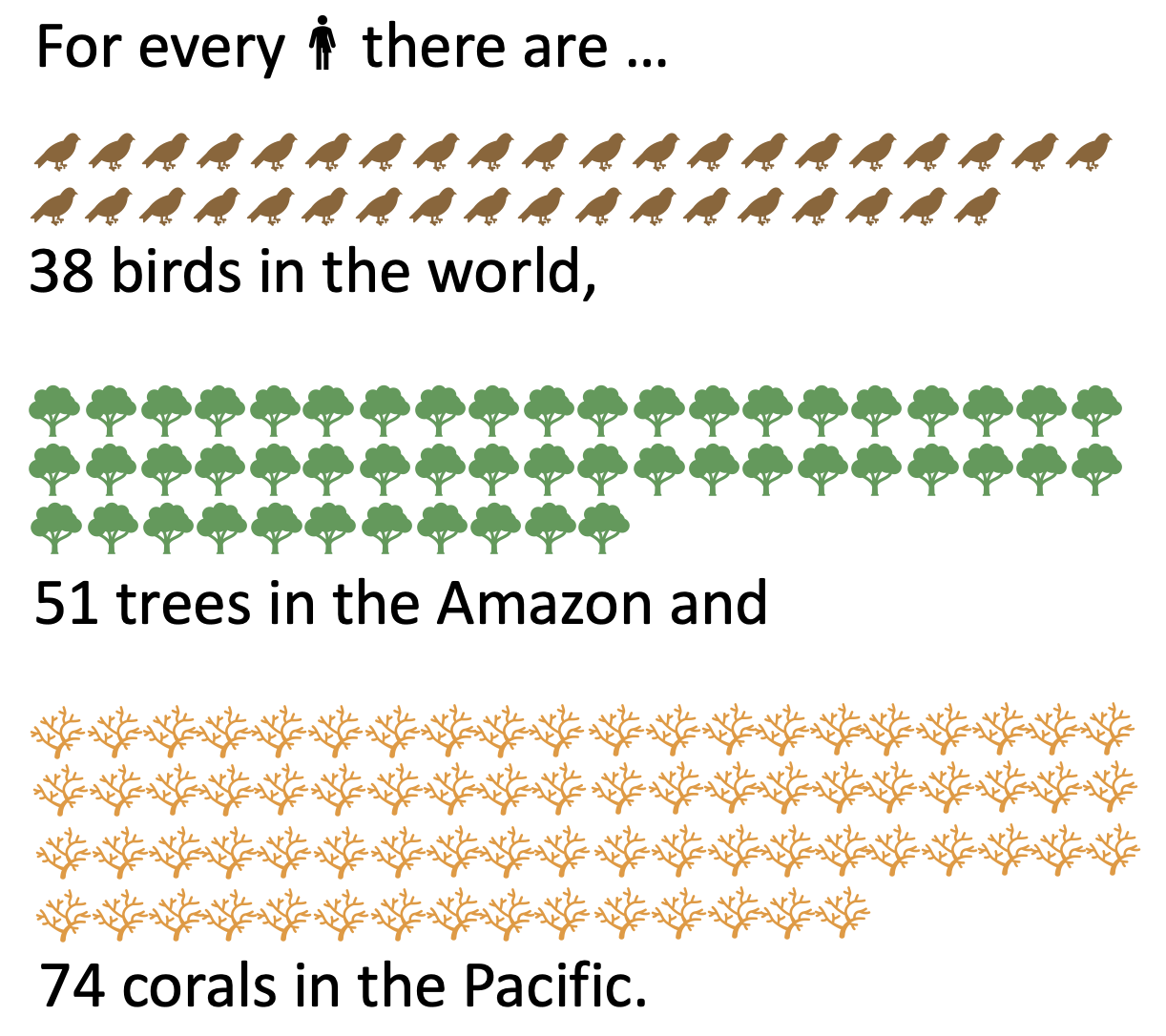 The massive population sizes of these species are perhaps unsurprising. After all, their geographic ranges can stretch half-way around the globe, from the East Coast of Africa all the way to French Polynesia. Our findings that two-thirds of the examined species have estimated population sizes greater than 100 million colonies sheds new light on their risk of extinction. Notably, 12 of the 80 species in our analysis that are currently considered to face elevated risk of global extinction have population sizes of 1 billion individuals or more. Overall, IUCN conservation status of each species was a poor predictor of population size. This highlights the need to rethink our understanding of the risk of global extinction in hyper-abundant and widely distributed marine species like corals, which is much lower than previously estimated and will take considerably more time than a few decades.

Coral abundances are declining on most reefs in the world, often dramatically. The ecological consequences of these collapses in coral abundance are devastating and will likely cause frequent local and functional extinctions of coral species and other reef organisms. Our study highlights, however, that decisive action to mitigate threats to coral reef ecosystems, most notably climate change, may avoid global extinction and allow for an eventual recovery of reef coral assemblages.

What were Mesozoic mammals eating?

Graduate School: The guide to getting things done