Birds in hot environments face significant challenges to maintaining body temperature below lethal limits during extreme heat or intense activity. Under these conditions, avian body temperatures typically increase to maxima near 45 °C, with 47 °C reported in one central American species. During such extreme hyperthermia, even small increases in body temperature cause precipitous declines in physiological function rapidly followed by death.

Over the last decade, my collaborators, students and I have investigated the thermal physiology and heat tolerance of around 60 desert bird species. We recently expanded this work to evaluate how evaporative cooling capacity varies among birds inhabiting other biomes. It was against this backdrop that, in late 2019, PhD student Marc Freeman and postdoc Zenon Czenze set up a field laboratory in the montane grasslands of eastern South Africa to collect data for larks, chats and other grassland taxa.

One species not on our target list was the red-billed quelea (Quelea quelea). A small member of the Ploceidae (weavers), this quelea has the distinction of being the most abundant non-domesticated bird species on the planet. It occurs over large parts of sub-Saharan Africa in vast flocks sometimes numbering several million individuals, with the total population after good breeding seasons estimated at 1.5 billion birds. Colloquially referred to as feathered locusts, the granivorous queleas are significant agricultural pests in many African countries.

One quiet day when our target species were proving elusive, Marc and Zen happened to catch a couple of queleas in their mist nets and decided to take a closer look at the species’ thermal physiology. What began as a routine respirometry run turned into a jaw-dropping afternoon as the body temperatures of the queleas passed 46 °C, and then 47 °C, without any ill effects. Only when their body temperatures exceeded 48 °C did the queleas start to show the signs of severe hyperthermia that were our cue to end measurements and transfer each bird to a cool environment with plenty of water to recover before later release.

After a phone call to the initially incredulous PI in Pretoria (me!), red-billed queleas were rapidly elevated to the top of our priority list. The data we subsequently collected from 20 individuals confirmed that this species has a phenomenal tolerance of hyperthermia: 15 queleas reached body temperatures above 48 °C, with one achieving a staggering 49.1 °C before showing signs of severe heat stress.

The red-billed quelea’s capacity to tolerate the highest body temperatures yet documented among birds raises a host of questions. First and foremost, what physiological and molecular mechanisms create the basis of their extreme hyperthermia tolerance? How, for example, does heat shock protein expression differ between this species and those with more typical tolerance of hyperthermic body temperatures? Our results suggest the species may be an excellent model for identifying processes that set upper limits to avian body temperature, information with potential applications in fields as diverse as ecology and poultry production. 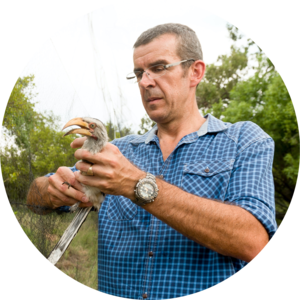