We identified the plants used by honeybees in 2017 by DNA metabarcoding 441 honey samples from throughout the UK. We compare this to a survey of honey samples conducted in 1952. Our results reflect changes in UK agriculture and provide evidence for how best to increase floral resources.

Identifying the plants used by honeybees

In 2017, Dr Laura Jones from the National Botanic Garden of Wales asked beekeepers from throughout the UK to send samples of honey for DNA metabarcoding. She gave talks to beekeeping associations and appeared on BBC Gardeners' World to ask for honey. In total, 441 honey samples were analysed using the DNA barcode markers rbcL and ITS2. This was compared to the results of a survey of 855 honey samples carried out by A.S.C. Deans in 1952 using microscopy.

Our paper is published in Communications Biology.

White clover declines in the landscape

In 1952 the most important plant for honeybees was white clover (Trifolium repens). In 2017 white clover was still the second most important plant but there was a significant reduction in its presence within the honey. This likely reflects a reduction of white clover within the landscape. White clover used to be a dominant plant within permanent pastures and was also often included in grass leys as a source of protein for livestock. Agricultural intensification led to a reduction in the number of permanent pastures and increased use of inorganic nitrogen fertiliser meant that clover was less likely to be sown in grass leys.

With the reduction of such an important nectar source, honeybees needed to find alternative supplies of nectar and pollen. Our results suggest that honeybees increased the amount of bramble, Rubus fruticosus, in their diets. Bramble and white clover flower at similar times and bramble increased significantly as a major honeybee plant between 1952 and 2017.

Oilseed rape (Brassica napus) was first grown in the late 1960s with 4884 ha in production in 1969. By 2000 this had risen to 332,000 ha. The bright yellow fields are now a common sight in spring, especially in the east of the UK.  In 1952 the genus Brassica, to which oilseed rape belongs, was a major plant in only 2% of honey samples, by 2017 this had increased to 21%. The presence of Brassica pollen within the honey was found to be significantly greater from hives found within 2 km of oil seed rape crops.

The emergence of an invasive plant: Himalayan balsam

Honeybees in their search for nectar and pollen have also tracked the emergence of an invasive species. Himalayan balsam (Impatiens glandulifera) was first introduced into the UK in 1839. Its fast-growing stature (up to 3 m tall), orchid-like flowers in shades of white, pink and purple, and exploding seed pods, appealed to Victorian gardeners. Himalayan balsam soon made its escape from the garden walls, first spreading slowly, then increasing more rapidly from the 1940s to the 1960s. The pace of its spread continued to increase over the following decades and Himalayan balsam now rampages along riversides and road verges. In 1952 it was present within UK honey at low levels, occurring in 3% of samples with only 1% as a major plant. In 2017 it was found within 15% of samples and was a major source in 6%. Himalayan balsam is now an important late-season plant for honeybees, providing an abundant nectar source at a time of year when there is little else available, but it is also a highly invasive species listed under Schedule 9 of the Wildlife and Countryside Act 1981, making it an offence to plant or cause this species to grow in the wild.

How can we improve the lives of honeybees and wild pollinators?

Honeybees and wild pollinators need abundant and diverse sources of nectar and pollen within the landscape, to provide sufficient, high-quality food. In 2017, bramble, white clover and Brassica were the top three plants for honeybees. The next most important plants were spring-flowering shrubs and trees, including hawthorn (Crataegus monogyna), apple (Malus species), Cotoneaster species, sycamore (Acer pseudoplatanus), and cherries and plums (Prunus species). Towards the end of the season, heather (Calluna vulgaris) was an important honey plant, along with the invasive Himalayan balsam.

Landscape-level changes are required to provide more floral resources. The UK needs more flower-filled hedgerows with bramble margins and grasslands rich in wildflowers. The conservation of remaining species-rich meadows is a priority, but the area that these habitats cover is vanishingly small. To make the biggest gains in nectar and pollen, changes are needed in the most prevalent habitat in the UK today, the ‘improved grasslands’. For honeybees providing more white clover in improved grasslands would be best, for other pollinators different flowers will be more important. 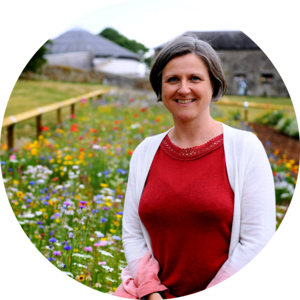 Head of Conservation and Research, National Botanic Garden of Wales

I remember reading that the move from horses to tractors meant a huge reduction in the clover cover as previously its high protein was desirable for hard-working draught horses. It is an easy source of forage to include in any grass mix so perhaps it should also be grown more extensively in parks and gardens as well as less.

Interesting article, thank you. My bees really work the balsam but [thankfully] seem to avoid the OSR!