Back in the late 1990’s, we were finishing Biology at our home university and had recently started to volunteer and then work with wolves. Soon after that, bear research started too. Two decades later, we have had the luxury chance to work together on wolf-bear interactions with, probably, the best data available in the world. Collaborative research is one of the most rewarding activities that a scientist can be involved in, but anyone would likely agree that this process needs nurturing, hoping that many of our quandaries will be found at the bottom of a pint. A colleague once told us: “be careful with dreams, they may become true”, and he was right. Our job fulfills the dream of any young biologist interested in apex predators, but it also brings personal challenges, like being far away from home for long seasons, when things go well and, sometimes, when they could go better.

Many large carnivores continue to be threatened at worldwide scale, but several populations of different species are recolonizing former ranges in human-dominated landscapes. Having wolves and bears in the same ecosystem is great conservation news, but they also bring along management-related challenges. Because large carnivores are particularly important for ecosystem functioning, this calls for the question: How do large carnivores coexist within the same landscape? Monitoring large carnivores is challenging because they are rare, elusive, often crepuscular or nocturnal and therefore, methods to monitor them (e.g., GPS tracking) are challenging to implement. In particular, the study of apex predators and their interactions requires data from many individuals of different species, across large areas and over long temporal scales, involving large teams of researchers collaborating with a shared aim.  The Scandinavian Wolf Research Project (SKANDULV) and the Scandinavian Brown Bear Research Project (SBBRP) have been monitoring Swedish and Norwegian wolves and bears for decades, collecting large amounts of information such as GPS data.

Photos taken by camera traps of a gray wolf and a brown bear previously radio-collared by the Scandinavian Wolf and Bear Research Projects © SKANDULV and SBBRP.

In the last years, both projects have joined forces, shared their unique datasets and conducted joint research to understand how wolves and bears interact with each other and their prey. Bears and wolves have been recolonizing Scandinavia in recent times and now there are areas with none, one, or both predators. In this “experimental” scenario, we have been trying to disentangle if wolf habitat selection is affected by bear presence or absence, with studies at different spatial scales. So far, we have found that bears influenced the spatial recolonization of wolves, that wolves and bears having overlapping home ranges selected different habitats, and that bear presence is one of the factors involved in the process of wolf dispersal. Those papers, among others, are cited in our article and you can find them in our webpages if you feel like going deeper into the topic!

A wolf and two bear cubs (1-year old) feed on a moose that had been killed by the wolf pack living in the area © SKANDULV and SBBRP.

In this paper, we explored if wolf habitat selection within their home ranges was different between wolves overlapping with bears and those living in areas without bears. Based on previous findings, we expected wolf habitat selection to be different in areas with bears especially in summer, when bears are active, whereas no clear difference was expected for winter, when bears are denning. But we found the opposite! Wolves selected for lower altitudes in winter, particularly in the area where bears and wolves are sympatric and where the altitude is generally higher than where they are allopatric. We concluded that wolves in bear areas likely follow the winter migration of their staple prey in Scandinavia, moose, to lower altitudes. In other words, we did not find any clear effect of bear presence in summer on wolf habitat selection, in contrast with our previous studies.

Publishing “negative” results is not always an easy endeavour. However, this was an important finding, reinforcing that the manifestation of a specific driver of habitat selection, namely interspecific competition, can vary at different spatial-temporal scales. Understanding the complex structure of ecological communities and the driving mechanisms underlying interactions is remarkably challenging. Our study is yet another step in that process, plus a reminder to critically examine our ideas. Previous results are important to make new predictions, while new results can challenge our way of thinking and demand a new pint to keep discussing the next question… 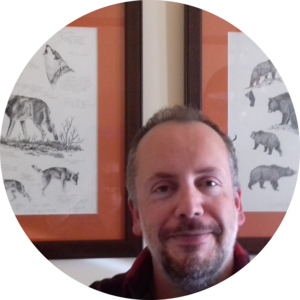