Global biodiversity and geographical patterns of marine organisms have always been one of the hottest topics in marine science for centuries. The tropical Indo-West Pacific Ocean, especially the Indo-Australian Archipelago (IAA), has been identified as the global hotspot for the present-day marine biodiversity 1. Fossil and molecular evidences revealed that the marine biodiversity hotspot had moved from the West Tethys (42 to 39 Ma) to Arabian (23 to 16 Ma), then to IAA (~10 Ma). The most popular hypothesis declared that multiple factors, such as tectonic activity, ocean currents and climate, contributed to the formation of the marine biodiversity hotspot in IAA. However, if we pay attention to a group of organisms, it is necessary to consider not only the environmental factors, but also their own biological characteristics.

Why seahorse? Seahorses, owing to their unique and novel body shape and the special reproductive strategy of male pregnancy, attracted the attention of both scientists and general publics (Figure 1). The radiation of seahorses (Family Syngnathidae, Hippocampus) is a particularly iconic and suitable model system to investigate the effects that tectonic activity and ocean current dynamics can have on the dispersal and diversification of marine taxa due to the seahorses’ dispersal by rafting. Seahorses exhibit poor self-dispersal performance due to their sedentary lifestyle and low swimming ability. There are more than 40 extant seahorse species known to science, inhabiting almost all the shallow areas of the global tropical and temperate oceans. Significantly, more than two-thirds of seahorse species live in the Indo-Pacific Ocean, which makes seahorses the ideal group to explore the formation of biodiversity in IAA and their global diversification.

Previous studies have focused on the evolutionary origin of seahorses and their dispersal strategies. Nonetheless, a comprehensive understanding of the seahorses’ colonization routes is still missing as phylogenetic reconstructions were typically either derived only from relatively few species and/or few genetic markers 2-4. Therefore, we investigated the diversification patterns of these unique fishes based on the analysis of 21 dominant seahorses species with diverse global distribution patterns. By conducting comprehensive phylogenetic analyses, we inferred the seahorses’ demographic history and revealed that the common ancestor of all seahorses originated in IAA ~20-25 Ma, then occupied global niches gradually via long-distance dispersal 5. 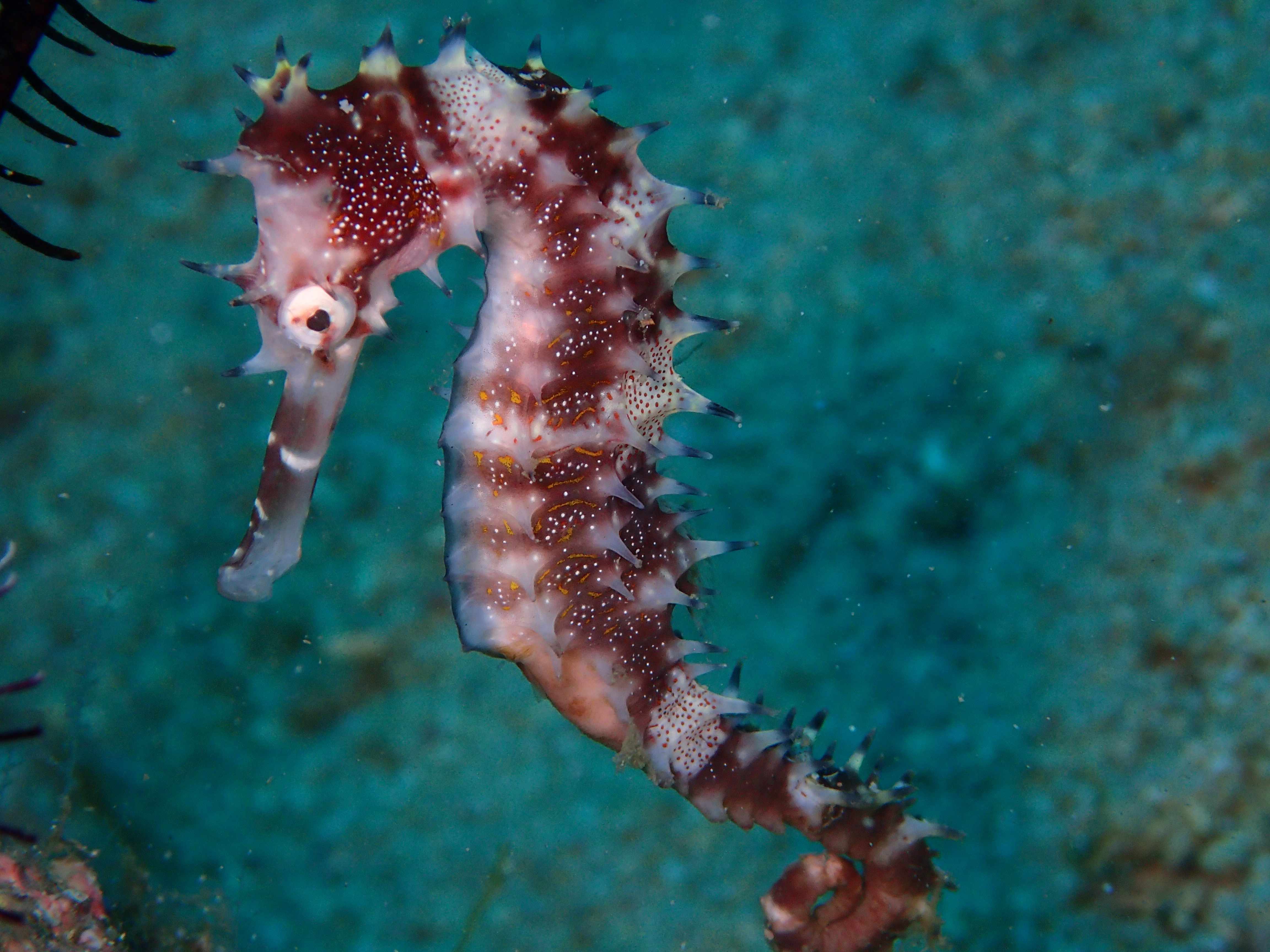 Another intriguing finding is that the ancestors of some seahorse species emerged as a new lineage by dispersing back into the original center after colonizing the Arabian Sea, thus further contributed to the high diversity in the region of tropical Indo-West Pacific Ocean. In brief, our results suggest that Indo-West Pacific  region is both a "source" and a "sink" for seahorses, and ultimately becomes the center of global marine biodiversity 6.

In addition to their unorthodox means of dispersal by rafting along oceanic currents, the ability of rapid adaptation to new environments may also account for the evolutionary success seahorses had while diversifying globally. In our previous works, we found that seahorse genomes evolved under some of the highest mutation rates among teleosts, which could produce more genetic variations and might provide more opportunities for adaptation 7. In this study, we uncovered the genetic basis of the independent recurring of sharp bony spines, which can effectively protect seahorses against predators. We tend to believe that the evolution of adaptive traits should be an important factor facilitating seahorses’ global colonization.

In summary, our study provides an important case for the study of the dispersal and diversification of global marine organisms (Figure 2). However, it is also worth noting that the formation and maintenance of biodiversity is complex and may differ across taxa. For example, some coral reef fish and crustaceans only inhabit in Indo-Pacific Ocean but not Atlantic Ocean, despite their higher dispersal ability than seahorses, suggesting that there may be far more factors contributing to the distribution and dispersal of marine organisms. Back to Nature Comms

Joanne Bennett
Nature Portfolio Ecology & Evolution Community
We use cookies to help improve your experience. By continuing to browse our website you are consenting to our use of cookies.
Learn more