“Neontologists love fossils.” This was the tongue-in-cheek exchange between two colleagues of mine, Dr. Mike Bell and Tanner Frank, as I marveled at a 10 million-year-old stickleback we had just revealed in some split diatomite. In 2019, we were working together in a windy, dusty, exposed, high-elevation mine outside of Fernley, Nevada, USA, helping Tanner collect specimens for his dissertation. Mike and Tanner are both savvy paleontologists, so they’ve tempered their love for fossils with the hard-earned knowledge of what it takes to get them. For me, a novice, I was (am) still in awe.

The following is a tale of how a comparative biologist of extant populations published a paper on fossil genetics despite (almost) never having studied a fossil in his life. I won’t explain the system, per se, as that’s been done well already (Bell 2009). Rather, my point is to highlight for graduate students and postdocs that your research path is sometimes punctuated by large, lateral moves, forming whole new research branches seemingly overnight.

I ask questions about the speed and repeatability of evolution but I use extant populations to do so. Generally, the fossil record doesn’t provide enough replicate populations nor large enough sample sizes within those populations to do my comparative work. So, how did I end up working with fossil data to ask my kinds of questions?

The seed was planted about a decade ago, when I was a graduate student in Dr. Charles Marshall’s* paleontology/macroevolution reading group. We read and discussed Hunt et al. 2008, which used advanced modeling approaches to detect evolution by natural selection in a ~17,000 year-long sequence of fossil stickleback collected at a resolution of about 250 years. I took note of this paper because population-level sampling for that length of time at that resolution makes for an absurd, amazing data set! We neontologists can only reach that temporal span using microbes. If you study lizards or fish like me, forget about it. Ten years is the best I’ve been able to manage so far.

The seed lay dormant, buried by metaphorical sediments of ongoing projects, job and grant applications, and, [checks notes], life. Until 2018, when I got stymied trying to infer the past evolution of stickleback trait covariances by looking only at covariances in present-day samples**. Then, I remembered Bell’s data set—at 250 year resolution for 17,000 years, why infer covariance evolution when you could simply just observe it?!  So I reached out to Mike for his data, and he generously shared what I asked for, and more. Apparently, he read my message on a ski train in Switzerland and says he was thrilled to welcome a new collaborator. The first fruit of our new collaboration is the paper just published in Nature Ecology and Evolution (see the "Read the Paper" link at the top of the page)—an idea that Mike and co-author Matthew Travis have had for years but that needed someone to pick up, update, and run with. Now, in a growing confluence of Mike’s and my ideas, we are working on at least four more papers, and perhaps, eventually, a new grant.

All this to say, graduate students and postdocs, keep track of those papers and data sets that you really liked. Almost every data set has more questions that could be asked of it and new data that could be collected to augment previous work. It could take years before you have the time, money, and mandate to start a new research direction, but in the meantime, your ideas and questions can percolate, grow, evolve. And, once you’re ready, don’t be shy in reaching out to the people who have those data. Especially if they are fossils senior scientists. They may be more than happy to share, to see their work restarted and reinvigorated. And then for you, you’ll be able to learn from new collaborators, develop new ideas***, and experience the joy of having a whole new research direction.

* Coincidentally, or not, Charles is Tanner’s PhD advisor.

** I'm still stymied by this, mostly due to my own lack of skill. If any graduate students or postdocs out there lost a field season due to COVID and want to pick up a paper/chapter to help fill the gap, get in touch. The question is about the repeatability of P-matrix evolution a highly replicated, highly multivariate stickleback system. I think there's a great paper in there. Right now, it's half-written paper and half-coded and is just waiting for someone with better computational chops to finish.

*** I ran this blog post past Mike. He said that he would add the following advice: “[Mike] sometimes tells students and junior colleagues that they should keep their eyes open for opportunities early in their careers to initiate long-term sampling programs to study contemporary evolution.” 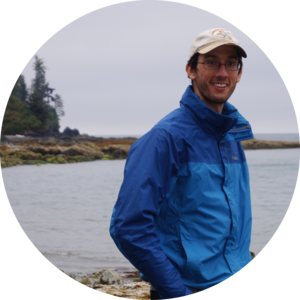