Most animal phyla appeared in the Earth's rock record only during a short period of the Cambrian bioradiation (~540-520 my). Small Shelly Fossils allow us to form conclusions about the sequence of evolutionary events that shaped the Earth's biodiversity, and the existence of stem group species.

Mongolia – a mountainous highland plain consisting of more than 40 different tectonic terrains. Many of these are extremely old and can be dated to the Precambrian, more than 540 million years ago. They were part of the largest orogeny on Earth, the Central Asian Orogeny Belt (CAOB), stretching almost from the Ural Mountains to the Pacific Ocean. Most of the CAOB´ s mountains formed between the late Cambrian and early Triassic (500-250 million years ago) and unified many of the erratic tectonic blocks. The question we now asked ourselves: What history did these fragments of crust have prior to the destructive orogenesis?

We studied assemblages of early Cambrian Small Shelly Fossils (SSFs) from the upper sediment layers of the different Mongolian tectonic blocks of the CAOB, which allowed us to form conclusions about their paleobiogeographic relationships. SSFs, ranging in size from 0.1-2 mm, are the mineralized skeletal remains of various metazoan groups from the early Cambrian (~540-520 million years ago), the beginning of animal life. Still enigmatic, many SSFs origins, appearances and classifications are currently unknown.

We collected samples in three separate field expeditions to western Mongolia. Challenging were the drives to the sites where our fieldwork was conducted: to reach our outcrop in the Khasagt-Khirekhan mountain range, a three-day drive along gravel roads was necessary. We used traditional fieldwork techniques, which proved to be physically exerting when carrying heavy equipment and supplies over 1000 km from Ulan Bator. Missing equipment could not be replaced once in the outback.

As a safety precaution, we travelled with two 4WD-jeeps and one large truck. While being loaded with the essential camping equipment, tents, food and water supplies, fuel and spare tyres on our way to the outback, this was replaced with almost a ton of carbonate rocks on the return journey. These sediments accumulated to up to 2 km of thick, early Cambrian strata, deposited in shallow, warm sea.

When we came across a limestone formation containing the remains of an ancient archaeocyatha reef, we unintentionally discovered that this contained some particularly fossiliferous beds. When analysing our samples in the laboratory, we found exceptionally preserved fossils amongst disarticulated SSFs. These astonishing discoveries included the eggs, embryos and post-embryonic stages of camenellans. Far from being skeletal remains, our newly discovered embryos and post-embryonic stages of camenellans are preserved in soft tissue which was replaced by calcium phosphate during the early sedimentary process of fossilisation, conserving them for millions of years.

Back in our laboratories in Germany, China and Britain, we recognized the unique features of this fossil deposit. Unlike other conservation Lagerstätten, it contained not only cuticularized and thus more durable remains, but also some with cellular fidelity. More importantly, it also contained a small number of juveniles which we interpreted as early ontogenetic stages of camenellan tommotiids. The significance of the discovery of the early stages of development of camenellans is inevitable, considering that all previous knowledge of this species was derived from disarticulated, mature specimens. 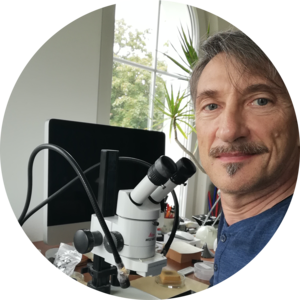