We often think that populations close together have similar patterns, and the farther away you get, the more dissimilar they are until they are not correlated at all. What about if we get data from far enough away, might those patterns actually be asynchronous? Yes.

The story behind LaMontagne et al. 2020 starts a long time ago for me. I've long been interested in emergent patterns across scales, dating back to my time as an undergraduate and a graduate student. Nearly 20 years ago I became interested in the phenomenon of mast seeding, which is defined as 'the spatially synchronous and highly temporally variable production of seed crops by a population of perennial plants'. Even within a population, I noticed that some individuals had patterns that differed from the population, and that sites even 5 km apart could be different. This local variability was a bit of a surprise, because the main drivers for mast seeding have been linked to weather conditions and over these small distances they should be pretty similar. Also, there are thought to be strong evolutionary reasons for trees to be synchronous with other trees, including starving and then satiating seed predators, and increasing pollination efficiency.

In 2011, I started my faculty job and had decided that mast seeding would be part of my research program. It's fascinating to me, and fills a lot of the buckets of what I'm interested in as a population ecologist. And trees are great to study, they generally stay in the same spot where you left them, year after year (the occasional tree falls over).

While travelling anywhere in the world, you can often find me looking at the trees, particularly conifers, and commenting to whoever will listen about their cone production. Over the years I've also spent time in both western Canada and the eastern US and Canada, and had noticed that cone production in spruce trees were often different, even in the same year. Lots of cones out west generally meant not many cones out east. Of course, that was anecdotal. I wanted to study it. I wanted to compile existing datasets that could answer this question. White spruce (Picea glauca) is a main species that I'm interested in, and it has a distribution spanning the North American boreal forest. It's a species that has a strong ecological role, providing seeds for numerous species of animals, including boreal seed-eating birds, small mammals, and insects. The pulse of food produced by white spruce in high-reproduction 'mast event' or 'mast years' have cascading effects in the ecosystem. White spruce is also an economically important species, and the seeds are valuable for forest regeneration.

In the early-mid 2010s, I started working on compiling conifer mast seeding records primarily in North America, and happened to be on a conference call with (co-author) Walt Koenig. Somehow it came up that he and his then-postdoc, (co-author) Ian Pearse, were working on compiling mast seeding records as well. After the call we chatted, and decided to join our efforts together to create a worldwide mast seeding database (see Pearse et al. 2017). Around that same time, I was at a CSEE (Canadian Society for Ecology & Evolution) meeting in Montreal and while I was there met up with (co-author) David Greene. He had told me about a dataset he had been collecting by driving the Trans-Canada highway; he had noticed a similar pattern in the data he had. Some time after that meeting, we split up the work and I took over the eastern portion of the drive.

With white spruce alone, we compiled 68 datasets that were at least six-years long, from across it's distributional range (Alaska in the west to New Brunswick in the east). Some data came from previously published studies, open data, and information that was generously shared with us; we used data that spanned a 30-year period (1985-2014) (Shout out to supporting long term research!). So...now we could look at continental-wide synchrony, with sites distributed up to 5,200 km apart.

With 1,587 pairs of sites, we looked to see how similar their patterns were based on the distance between them. We found that for sites close together their patterns of mast seeding over time were similar, and as the distance between sites increased that their similarity declined. That's something we would all expect to see. But, what was novel in our study is that once sites were farther than 2,000 km apart that the correlation in those mast seeding patterns over time actually became significantly negative. That means, if it's a big cone year (aka a 'mast event') in the east, that it generally won't be in the west, and vice-versa. It's asynchronous.

What might explain that pattern of asynchrony was the next step. One of the drivers of mast seeding patterns is believed to be summer temperature. For species like white spruce, if it's hotter in summer - when the buds are differentiating into reproductive or vegetative buds - there will be more reproductive buds, and the following year there will be more cones and seeds. It's been proposed that the difference in summer temperature between the year when the buds differentiate (year 't-1') and the previous year (year 't-2') matters a lot for the magnitude of actual reproduction that happens in year 't'. So, we set out to see if that would work better than absolute temperature or other metrics of temperature for predicting mast seeding patterns. When I made continental maps of the difference in summer temperatures in year(t-1) - year(t-2), and then looked at the spatial distribution of high-reproduction mast events in year t, it was a great moment. I could basically predict where mast events would happen regionally across the continent based on the temperature difference maps. That was a fun finding to share with my co-authors. And it held up statistically.

At the continental scale in North America, climate dipoles can occur, where it may be hot in east, and cool in the west, or vice-versa. Since temperature conditions are linked to mast seeding, we saw here the emergence of an ecological dipole. Understanding the patterns, drivers, and consequences of mast seeding variability and synchrony are some of the ongoing areas of research that my lab and collaborators are investigating. 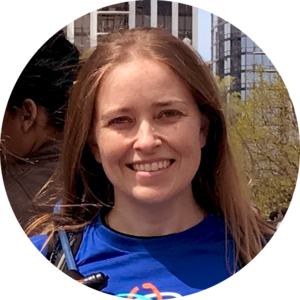 I'm a population ecologist, and I'm generally interested in emergent patterns of variability and synchrony across spatial scales. My lab conducts research in a variety of study systems. We study patterns, drivers, and consequences of reproductive synchrony in boreal conifer trees ranging from individuals, to sites, to regional and continental scales. We also study urban ecology and how the urban mosaic affects habitat availability, population dynamics, and animal behaviour.
Follow