This is a story, ~110–107 million years in the making. It's about a fossil vertebra, found by a volunteer dinosaur digger on the Victorian coast. A vertebra that masqueraded as a pterosaur for years. A vertebra that we now know represents a 'light-footed lizard' of Oz: Australia's first elaphrosaur.

Drive southwest of Melbourne, beyond Geelong and Lorne, and you'll ultimately reach Cape Otway. This beautiful region, blanketed by forest and fringed by beaches, is a tourism hotspot in Victoria. In late summer (February), the narrow verges of the winding roads are often peppered with cars, hastily parked and vacated by koala-gazing tourists. Koalas and tourists alike are oblivious to practically all else around them, including cars carrying volunteers for the annual Dinosaur Dreaming dig on the coast.

Since the 1980s, Cape Otway has been renowned for its polar dinosaurs, largely thanks to the efforts of Dr Tom Rich, Prof. Patricia Vickers-Rich, and the Dinosaur Dreaming team. These dinosaurs lived ~110–107 million years ago (during the Early Cretaceous) in the then-narrow rift valley that separated southern Victoria from northern Tasmania, when Australia was firmly attached to Antarctica and situated much further south than it is today. Despite its near-polar position, temperatures in southern Australia were mild at this time. Conifer trees (including relatives of modern day monkey puzzles) thrived. Ferns and cycads jostled for position with ginkgoes and horsetails. Flowering plants bloomed. Broad, deep rivers snaked through the rift valley, carrying huge volumes of sediment as they went. And these river sediments, now turned to rock, buried carcasses, or parts thereof, which then became fossils.

In February 2015, while volunteering for Dinosaur Dreaming at a fossil site on Cape Otway known as Eric the Red West (ETRW), then-student Jessica Parker discovered a strange bone. The fossil-hosting rocks at ETRW are extremely hard, so ‘to find a bone, you have to break a bone’ — normally with a hammer-driven screwdriver or chisel. Luckily, Jessica barely nicked the edge of her bone, which proved to be extremely fragile, and rather unusual. Mere weeks after its discovery, Jessica's bone and other fossils found by the Dinosaur Dreaming crew were packed and transported to Melbourne Museum. There, David Pickering (then Collections Manager of Vertebrate Palaeontology) determined which specimens were priorities for preparation. Jessica's bone was one of them.

Although I was living in Brisbane in 2015, I frequently visited Melbourne (my hometown) to see friends and family. Often, a trip down south would include at least one day at the Museum. And on one such occasion, an excited David Pickering could scarcely wait to show me the fruits of his latest labour: Jessica's bone, almost completely freed from its rocky tomb. The bone was beautiful, delicate, and minuscule — only 5 cm long. More importantly, it was practically complete and undistorted: a palaeontologist’s dream.

After preparing Jessica's bone, David correctly determined that it was a cervical vertebra (a neck bone). He had then gone through vertebrate palaeontology textbooks in an attempt to work out to what type of animal it belonged. He soon hit upon the idea that it was from a pterosaur — specifically, a tapejarid — and it was not hard to see why. The neck vertebrae of tapejarids are elongate and have neural spines that are long front-to-back but short top-to-bottom. Jessica's bone was seemingly a perfect match.

I did not think about the vertebra much over the next few years. In part, this was because I had other irons in the fire — naming the sauropod dinosaur Savannasaurus elliottorum, and moving from Brisbane back to Melbourne to take up a position with Professor Patricia Vickers-Rich at Swinburne University of Technology, for example. However, in April 2017, a tremendous pterosaur fossil was found by grazier Bob Elliott near Winton in central Queensland. Shortly afterwards, the Australian Age of Dinosaurs Museum (with whom I have been working since 2011) asked me to take on the supervision of PhD student Adele Pentland, who was to focus her studies on the new pterosaur. Incorporating the Victorian 'pterosaur' vertebra into Adele's PhD seemed a good idea, so I suggested she do so.

In early 2019, after almost two years of part-time research on the Winton pterosaur (and other pterosaurs from Queensland, including Mythunga camara), Adele travelled from Winton to Melbourne. During her stay, she took another look at Jessica's bone. She'd done so several times before, but this time was different: Adele now had an excellent understanding of pterosaur anatomy as a result of her studies. Shortly after lunch, Adele came up to me, seemingly not knowing how to feel about something she'd worked out. I don't recall the exact conversation, but it probably went something like this:

"So… you know that neck vertebra?"

"It's not from a pterosaur."

"Yep. Pterosaur cervicals are procoelous, but this vert’s amphicoelous. It can’t be from a pterosaur."

"Hmmm. Alright, let's work out what it is then!"

At that point, we were sitting in the Collections Managers' office. Sadly, David Pickering had passed away in 2016, but his books (kindly donated to the Museum by his partner) now filled the bookshelves that lined the walls. Among them was a copy of the first edition of The Dinosauria, and Adele and I decided that would be a good place to start. I could tell that the vertebra was not from an ornithischian or a sauropod, but I wondered if it might be from a theropod. I started leafing through the pages and soon stopped dead: the neck vertebra of Gallimimus was nigh on identical to Jessica's bone. Adele and I shared a moment of realisation: the vertebra was from a theropod!

Of course, this prompted more questions. What type of theropod? Could it really be related to Gallimimus? We decided that was unlikely, since the group to which Gallimimus belongs, the Ornithomimosauria (so-called 'ostrich dinosaurs'), is only well known from the Northern Hemisphere. That, and all reports from the Southern Hemisphere (including some from Victoria) have been disputed. Through careful analysis of the vertebra, we soon realised it was not from an ornithomimosaur.

After ruling ornithomimosaurs out, an enigmatic theropod named Elaphrosaurus bambergi from Tanzania sprang to mind. Many books that I had read in my childhood had suggested that Elaphrosaurus was an ornithomimosaur, but that had been disputed in the 1980s and disproven in the 1990s. Instead, it was now recognised as a ceratosaur, with the similarities between it and ornithomimosaurs a result of convergence rather than shared ancestry. However, there was a problem with the idea that Jess' bone was from an elaphrosaur: Elaphrosaurus, and its close relative Limusaurus inextricabilis, from China, were both from the Late Jurassic (~163–145 million years ago), removed in time from the Victorian theropod by at least thirty million years! No Cretaceous elaphrosaur remains had ever been found anywhere in the world. Could we really have the first one?

I knew that a detailed anatomical description of Elaphrosaurus had been published by Oliver Rauhut and Matt Carrano in 2016, and that was the logical next port-of-call. So, I pulled the paper up on my laptop, with Adele looking on… and we could scarcely believe our eyes. It was as if our vertebra was staring back at us from the computer screen! At that moment, we knew we were on to something big, even though our fossil was so small: we had the first elaphrosaur ever found in Australia, and the first from Cretaceous rocks anywhere in the world.

Within a few weeks we had the bare bones (ha, ha) of a description written. Not long after, Adele asked me to take the lead on the paper so that she could focus on publishing the Winton pterosaur (which she did, with me and others, in October last year, as Ferrodraco lentoni). Fortuitously, the release of that paper coincided with the 79th Society of Vertebrate Paleontology meeting in Brisbane, where Adele and I knew we’d be able to rub shoulders with some of dinosaur palaeontology’s big names, including Matt Carrano himself. Even more fortuitously, Matt had visited Melbourne Museum the week before the conference, and had briefly studied Jessica's vertebra. Keen to hear his thoughts, we met up with him at the pre-conference mixer at Queensland Museum… and sure enough, he thought the vertebra was from an elaphrosaur! Adele and I were delighted, and we resolved to finish the paper by the end of the year so that we could share our discovery with the world as soon as possible. We almost met our self-imposed deadline, too: the paper was submitted to Gondwana Research on January 16.

As we awaited reviewer feedback, the unbelievable happened: on February 5, a paper was published describing Huinculsaurus montesi, an Argentinian Cretaceous elaphrosaur that was even younger (geologically speaking) than ours! Having met the two lead authors of that study, Mattia Baiano and Rodolfo Coria, in late 2018, I was delighted for them rather than put out; nevertheless, our manuscript required substantial revision once it came back from review!

Even though we didn’t (quite) have the first Cretaceous elaphrosaur in the world, we still had the first elaphrosaur from Australia, and Adele and I thought that was pretty significant. The publication of our paper — on one tiny bone(!) — has attracted far more attention than we could have dreamed. I put that down in large part to the beautiful reconstruction of the elaphrosaur, now dubbed ‘Eric’, by my former Honours student Ruairidh Duncan (who also did most of the work on the digital data of the specimen, acquired at The Australian Synchrotron through Joseph Bevitt). Look no further than Ruairidh’s reconstruction for a general idea of elaphrosaur anatomy: a small head with a toothless beak (based on Limusaurus adult specimens; juveniles had teeth[!]), a long neck, a lightly-built body, stumpy arms with four-fingered hands (also inspired by Limusaurus), long hind legs and a long tail. These theropods probably departed from the theropod norm of eating mainly meat to having a mixed, or primarily plant-based, diet.

The Australian elaphrosaur shared its polar rift valley home with megaraptorid theropods, small-bodied ornithopods like Diluvicursor pickeringi (named for David Pickering), tiny mammals, and turtles. Birds and pterosaurs dominated the skies, and plesiosaurs, lungfish, and bony fish occupied the rivers. We’d love to find more fossils at ETRW, of elaphrosaurs and other animals, but our proposed digs this year have been postponed twice: first by bushfire risk (in February), and now the COVID-19 pandemic (since March). Hopefully, in time, we’ll be able to return to ETRW; maybe then we'll see if more elaphrosaur remains (or other fossil treasures) are to be found! 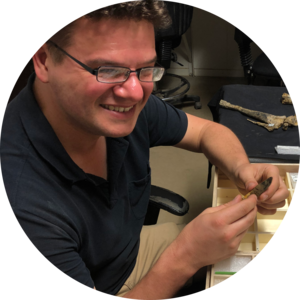 I loved reading this - it's a great story, and discovery! Thanks for sharing :)