Green Plants or Viridiplantae have traditionally been subdivided into two divisions or phyla, Chlorophyta and Streptophyta, the latter comprising the embryophyte land plants plus a grade of green algae known as the streptophyte algae. While the streptophyte algae have recently received considerable attention from plant scientists (e.g. Cheng et al. 2019, Wang et al. 2020), much less is known about the origin of green plants at the dawn of viridiplant evolution.

In the frame of this project, a chromosome-level assembly of the nuclear genome of the marine, picoplanktonic green alga Prasinoderma coloniale was established. As is characteristic for other picoplankters, the genome of P. coloniale is quite small (~25 Mb) encoded by 7,139 protein-coding genes. Prasinoderma had previously been identified as a member of the class Palmophyllophyceae within the Chlorophyta based on sequence comparison of plastid-encoded genes (Leliaert et al. 2016). Phylogenomic analyses of nuclear as well as mitochondrial genes as well as phylogenies based on whole nuclear- and plastid-encoded rRNA operons showed Prasinoderma (and related Palmphyllophyceae) to diverge before the split of Chlorophyta and Streptophyta leading us to establish a third phylum in Viridiplantae, the Prasinodermophyta.

Further analysis of the of P. coloniale genome allowed us to gain insight into the ancestral minimal core genome of the Viridiplantae, which we estimated to comprise 4,092 orthogroups. 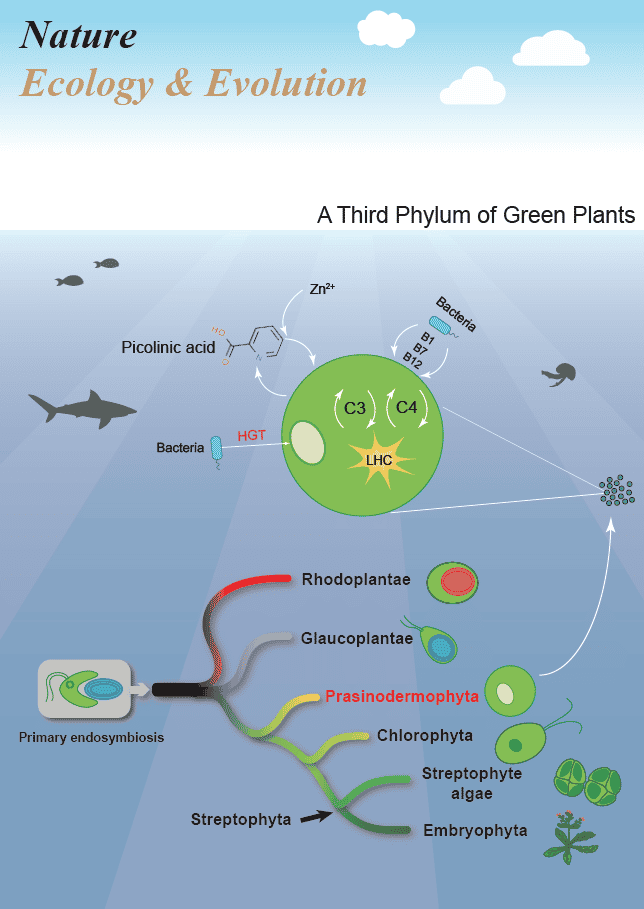 Processes involved in the adaptation of Prasinoderma coloniale, a marine picophytoplankter, and representative of the third phylum of green plants, to its low light, low nutrient environment at the border of the twilight zone (for details see text). C3/C4 two types of carbon acquisition in photosynthesis.

The sequenced strain of P. coloniale (CCMP 1413) was isolated from a sample collected in 1986 at a depth of 150 m in the North Atlantic Ocean. This is a low light environment at the border of the ocean twilight zone and we expected to find adaptations in the genome reflecting this. In fact, analysis of the gene set of P. coloniale revealed that the number of genes coding for light harvesting proteins increased through gene duplications. Surprisingly, we also found evidence for horizontal gene transfer from marine bacteria to P. coloniale. Particularly noticeable in this respect was the discovery of a pathway to synthesize picolinic acid, a powerful chelating agent for bivalent cations, which may facilitate uptake of trace metals in a nutrient-poor environment. The streamlined genome lacked the capacity to synthesize vitamins B1, B7 and B12, and we suspect that these vitamins are provided by symbiotic bacteria living in association with the alga. Loss of biosynthetic capabilities upon diminution of cell and genome sizes seems to be a recurrent scheme in the evolution of picophytoplankton. Association with bacteria and metabolic coupling may have fostered genome reduction. 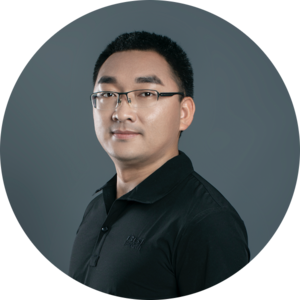