Generalists or specialists? Population size can be an important determinant

When a biological population adapts to an environment, there is no guarantee that it would also enjoy similar fitness gains in other environments. In many cases, such adaptation can be costly, and can end up reducing the population’s average fitness in environments that are not encountered. The traditional explanation for such heterogeneity in fitness changes across different environments invokes the concept of fitness trade-offs, often described using the popular adage “the jack of all trades is a master of none.” Such trade-offs form the basis of ecological specialization, which explains why species prefer one environment over others. The phenomenon of ecological specialization exhibits a gradient, in which one extreme (aka generalists) represents organisms that have similar fitness across a wide range of environments while the other extreme (aka specialists) encompasses organisms with high fitness in one environment but much lower fitness in a vast variety of environments.

There is a rich history of literature dedicated to the factors that determine whether evolution over a few hundred generations would result in generalists or specialists. For example, the stability of the environment during evolution can be an important factor; stable environments are more likely to lead to specialists than unstable ones. However, for any given set of unchanging environments under consideration, it is largely unknown as to which factors shape the extent of specialization. For starters, when we began probing this subject, there was no study in the existing literature that tested how a key parameter like the size of a biological population influences how much ecological specialization it undergoes. To resolve this issue, we performed experimental evolution with laboratory populations of Escherichia coli, and asked the following question: Do larger bacterial populations undergo greater specialization? There are two main reasons why asexual populations of unicellular microbes like E. coli are ideal systems to address such questions: 1. Owing to the small doubling times of these bacteria, one can follow their evolution in action for several hundred generations within a relatively short span of a few months. 2. The physiological and molecular foundations of fitness trade-offs are better known for microbes than for complex multicellular organisms.

Notwithstanding the absence of studies offering direct tests of a relationship between population size and ecological specialization, the existing literature has several indirect clues connecting these two entities. To begin with, various theoretical and empirical studies show that larger asexual populations adapt primarily via rare mutations with large beneficial effects. Since such rare mutations are virtually inaccessible to populations with a very small number of individuals, such small populations mostly adapt via common beneficial mutations with relatively modest effects. The second important clue has to do with the relationship between the direct and indirect (pleiotropic) effects of beneficial mutations. The phenomenon of pleiotropy describes the effect of a single genetic change (mutation) on multiple phenotypic features. Pleiotropy is an important player in the context of ecological specialization because a phenotypic feature that is unimportant to fitness in the encountered environment can be key to fitness in other environments. Several theoretical models of ecological specialization assume that mutations with large direct beneficial effects in the encountered environment also tend to cause large fitness disadvantages in unencountered environments. Although there are no empirical validations of this widespread theoretical assumption, we used it as a platform to design our experiments.

Figure 1: A schematic of how we arrived at our hypothesis.

Combining the above notions (Figure 1), we conducted experimental evolution with clonally derived E. coli populations at two vastly different sizes in two distinct environments. The two environments had different sole sources of carbon for bacterial growth (thymidine in one and galactose in the other). We chose these carbon sources because they have several differences in terms of their cellular uptake and metabolism; such differences could lead to fitness trade-offs across the two environments. At the end of our experiment, we determined the fitness of all the evolved populations in both the environments and found that the larger populations not only adapted more to their encountered environment but also lost more fitness in the unencountered environment. Moreover, the fitness values across these environments also showed a strong negative correlation. We also found that the fitness trade-offs across the thymidine and galactose environments were reciprocal: Adaptation to one environment led to maladaptation to the other, and vice versa. To rule out the possibility that these observations are specific to the thymidine-galactose environmental pair, we determined the generalizability of our results by measuring the fitness of all the evolved populations in two other distinct environments, with maltose as the sole carbon source in one environment and sorbitol in the other. This enabled us to quantify the extent of specialization across a total of six different environmental pairs; we found that the larger populations consistently underwent greater ecological specialization.

Our results imply that the evolution of large microbial populations in the same unchanging environment for a few hundred generations could make them specialize to this environment to such an extent that they may become vulnerable to abrupt environmental changes. Microbes frequently encounter such sudden changes in their environments, in both natural and clinical settings. Moreover, although our observations belong to asexual microbial populations, similar findings about the vulnerability of extremely large populations to sudden environmental change have also been reported for the now extinct passenger pigeons in North America. 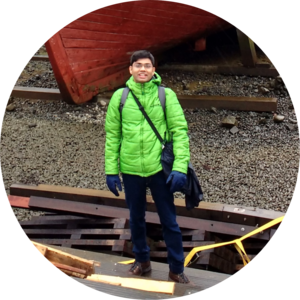 I use combinations of bacterial experimental evolution, whole genome whole population sequencing, and agent-based simulations to study the following: 1. The effects of population size on Genotype X Environment interactions in asexual systems. 2. The population genetics of divergent character evolution in identical environments. 3. The reasons behind the rarity of fitness costs in empirical studies.
Follow