In pursuit of the missing lynx

The Iberian lynx has been the most abundant carnivore in the fossil record in the Iberian Peninsula for half a million years. More than 3,000 Ice Age fossils have now allowed us to observe the past behaviour of one of the world's most endangered felines

Several years ago, I became interested in lynxes. The Iberian species (Lynx pardinus), was very close to extinction in the early 21st century. However, during the Pleistocene it seems to have been one of the most abundant carnivores in Iberia. Its fossil remains have been found in dozens of caves, together with large amounts of rabbit bones, their favourite prey. It seemed obvious that these bone accumulations had been produced by lynx several millennia ago, but how could we prove it?

Zooarchaeologists who study fossils using taphonomy, use bone modifications generated by living carnivores as a frame of reference. What were carnivores’ prey, and how did the marks they left relate to how they gnawed, chewed, and broke their bones? To identify the taphonomic signature of the Iberian lynx, I had to carry out my own observations, performing experiments in collaboration with the researchers at the Doñana Biological Station who are trying to recover the species through the successful Ex-situ programme. In return, I provided lynx fossils to my colleagues who were working to unravel their genetic past.

In our paper, recently published in Scientific Reports, we have used this frame of reference to study of fossil remains from one important site of northeastern Iberia. Cova del Gegant (Giant’s cave) is an important semi-submerged cave site located on the coast of Sitges, near Barcelona (Spain). The site has been excavated by my colleagues, Montserrat Sanz and Joan Daura, from SERP-Barcelona University, since 2007, and supported by Taphen.

The assemblage we studied has more than 3,500 remains, dated to 30,000 years ago. The bones and teeth of lynxes are very abundant and well preserved, including some kittens that died shortly after birth. Along with them, remains of their main prey abound, especially rabbits and some birds, such as pigeons and partridges, which have been identified by my colleague A. Sánchez-Marco from ICP.

Our results indicate that lynxes used the cave as a natal den on a recurring basis. The females carried in prey for their cubs and the kittens then gnawed the bones, generating a taphonomic pattern analogous to those we observed in our experimental samples. Lynxes also defecated in the cave, which led us to find fossil droppings (coprolites), in which digested rabbit bones were discovered. The set of signals and fossils that were buried together is known as taphocoenosis and has been characterized for the first time for the Iberian lynx in our paper.

Our study is important for archaeology and palaeontology since it allows us to differentiate remains of food that had been eaten by Iberian lynx from food remains left by prehistoric humans (including Neanderthals), who in Iberia consumed small game (especially rabbits) as the one of the main component of their diet.

Last summer, British paleogeneticist Ross Barnett published The Missing Lynx: The Past and Future of Britain's Lost Mammals. Through fossils of large mammals, Barnett shows how different Europe was 15,000 years ago. The book also teaches us how studying Ice Age fossils can help us recover endangered species and conserve biodiversity. Now, results from our study can also contribute to achieving these goals. The caves are safe and environmentally stable. Lynx probably chose caves as natal dens for millennia for this reason. The fossil record may aid in the recovery of the Iberian lynx, providing evidence of its habits and behaviours 30,000 years ago, when the area was less densely populated by human, and lynx hunted freely in Mediterranean forests throughout Iberia.

Thanks for comments on this post from my co-authors Montserrat Sanz, Joan Daura and Antonio Sánchez-Marco.

Barnett, R. The Missing Lynx: The Past and Future of Britain's Lost Mammals (Bloomsbury Wildlife, 2019). 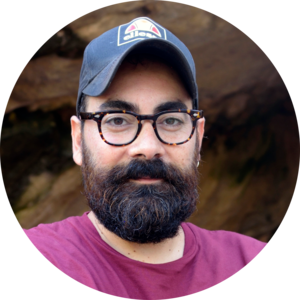 I am Palaeolithic archaeologist interested in taphonomy, zooarchaeology, forensic anthropology and cannibalism. My research focuses on the human behaviour in the past, with special interest on the evolution of the strategies, tactics and techniques developed for the subsistence inferred from the faunal record. I am Postdoctoral researcher in the department of Prehistory of the Complutense University of Madrid (Spain) which was founded by Hugo Obermaier in 1922, and associate researcher at the Institute of Evolution in Africa (IDEA, Madrid) and at Institute of Human Paleoecology and Social Evolution (IPHES, Tarragona).
Follow