Domestication of Atlantic salmon has led to increased predation susceptibility. This constitutes a mechanism underpinning their reduced survival in the wild.

Every year, thousands to hundreds of thousands of domesticated salmon escape from Norwegian fish farms. Most disappear, never to be seen again, but some survive until maturation and make their way up the river where they can spawn and interbreed with their wild conspecifics. Consequently, introgression of escaped farmed salmon has been documented in many rivers in Norway.

In nature, resources are limited, and salmon must compete for the food that is available. In the fish farm however, there is excess of feed, and the competition is more relaxed. Is a farmed salmon simply a bad competitor and dies because it can't get access to food in nature?

Alternatively, could it be that farmed salmon have a higher chance of being eaten themselves? In nature there are dangers such as larger fish that can prey on salmon fry. In contrast, salmon in aquaculture are protected from such threats.

In this study, we document that farmed salmon are indeed a good competitor but have a higher susceptibility to predations.

In early spring we planted out salmon fry of wild, farmed and hybrid origin into artificial rivers at Ims research station in southern Norway. In half of these rivers we released larger trout, and in the other half there were no larger fish present.

The results showed that salmon fry of farmed and wild parents had equal survival when competing for the natural, limited food resources in the artificial rivers without presence of larger trout. In other words, farmed salmon fry are good competitors!

But with larger trout present, salmon fry of farmed parents had a much lower survival. Farmed salmon fry are easier prey for larger fish, such as trout, in nature!

This study was conducted by researchers from the Institute of Marine Research (IMR) and the Norwegian Institute for Nature Research (NINA) and executed within the QuantEscape 2 project financed by the Research Council of Norway (grant 254852). 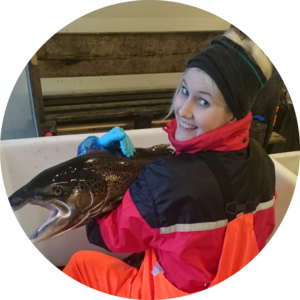 I am an experimental researcher with a general background in biology and a primary focus on evolutionary issues in an applied context. My first experience with experimental studies focused on the life history strategy of the parasitic copepod salmon louse (Lepeophtheirus salmonis). Since 2010 I have worked with quantitative genetics in the population genetics research group at Institute of Marine Research, Norway, focusing on topics related to domestication of Atlantic salmon (Salmo salar L.) and introgression of farmed salmon into wild populations. I am currently a guest researcher at Fisheries and Oceans Canada, Dartmouth, Nova Scotia.
Follow