When you look at the Llanos de Moxos, in the Bolivian Amazon, from the sky, you see a 150.000 km2 riverscape made of seasonally flooded savannahs criss-crossed by rivers and strips of forest. The forest grows on fluvial levees, both along modern meandering rivers and abandoned channels. It is a landscape that seems to be entirely built by rivers.

But, when you scroll your mouse wheel and zoom in, you start seeing something very different. A pre-Columbian artificial landscape made by agricultural raised fields, canals, causeways and mounds. Kenneth Lee, a petroleum engineer who was among the first to realise how much the Llanos de Moxos were shaped by pre-Columbians, once said that if you put a roof over the Llanos you have a museum.

It is not surprising that most of the efforts of the few archaeologists that have worked in the Llanos have focused on understanding the use and meaning of these late Holocene earthworks. The asymmetry between the overwhelming richness of the archaeological evidence and the limited amount of resources and researchers dedicated to its study has meant that some features of the LM landscape have historically received very little attention. This is the case of the forest islands. Forest islands are small patches of forest surrounded by savannah; you can see one in the upper left quarter of figure 1. Trees can form forest islands because they grow over small mounds, on average 70 meters across, which stay above the water level during the seasonal floods. How did these mounds form? This was the question we had when we first visited one of these forest islands in 2006; it was the Isla del Tesoro (Treasure Islands). Isla del Tesoro is made of very hard, rock-like material. This is very surprising, as there is no rock in the Llanos de Moxos, this is a large alluvial plain made of sand, silt and clay. At a closer look, this rock-like material turned out to be a concretion of crushed shells, burned earth, bones and sediments all cemented by calcite. Further studies and analyses revealed that Isla del Tesoro and other similar forest islands were early Holocene archaeological sites, which formed as middens and were also used for burials 1,2. The material that forms these sites is mainly composed by food remains and earth burnt by cooking in pits and ovens made with mud. Knowing these were among the oldest archaeological sites in Amazonia and that this region was a candidate to be an early centre of plant domestication3, we decided to look for evidence of plants consumed by these first Amazonians. To do so, we extracted and analysed phytoliths. Phytoliths are plant microfossils that we can use to identify what type of plant lived in that particular soil in the past. They are small pieces of glass that form inside plants’ cells or within cells. They have peculiar shapes that are indicative of the plant that formed them and can survive thousands of years in the soil. When I showed the slides with phytoliths to Prof. José Iriarte, at the laboratory of Tropical Archaeobotany and Paleoecology at the University of Exeter, he was impressed by the diversity and abundance of phytoliths from edible plants.

In the Isla del Tesoro, we found the earliest evidence, worldwide, of manioc consumption (10,350 years ago) and the earliest evidence of squash and maize consumption in Amazonia (10,250 and 6,850 years ago)4 . We also mapped more than 6500 forest islands in the Llanos de Moxos and surveyed 82 of them. This allowed us to estimate that roughly 4700 of the forest islands mapped are early and mid-Holocene archaeological sites. In some parts of the Llanos, forest islands are the most prominent landscape element and provide important ecological services, such as being preferential feeding and roosting sites for many species of birds, including the endemic and critically endangered blue-throated macaw (Ara glaucogularis). Our study shows that the earliest inhabitants of the LM were not just hunter-gatherers; engaged in plant cultivation since the early Holocene, thus suggesting that they might have had a mixed economy when they arrived in the region. The presence of thousands of anthropogenic forest islands shows that the human footprint on Amazonia is not just restricted to large-scale transformations by late Holocene farming groups, but is rooted in the earliest human dispersal into this region and has lasting implications for habitat heterogeneity and biodiversity conservation. 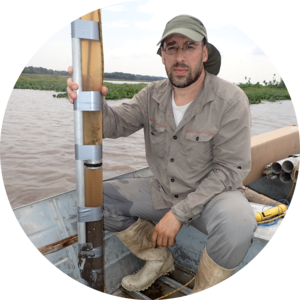