Horizontal Transfer, Coevolution and the Emergence of Multi-Drug Resistance

Bacterial plasmids are extrachromosomal genetic elements that often house accessory genes such as those that confer antibiotic resistance. They are not only a fundamental part of bacterial communities, but they also break a fundamental rule of inheritance. Unlike most genes that are passed down “vertically” from parent to offspring, plasmid genes additionally can be transmitted “horizontally” between unrelated cells or even different species.

Such horizontal transfer is problematic from a public health perspective, as it enables plasmid-mediated antibiotic resistance to move from one bacterial species to another. Some of these plasmids encode resistance to more than one antibiotic. Thus, through horizontal transmission bacterial pathogens can become resistant to multiple antibiotics in just a few minutes time. Furthermore, the movement of multiple plasmids among multiple species leads to cases where a single cell may be able to collect multiple distinct plasmids. When these different plasmids provide protection from distinct drugs, this providential cell further expands its drug resistance arsenal, ensuring multidrug resistance (MDR).

Scientific labs are not unlike bacterial cells in some ways. Much like standard inheritance of bacterial genes, a great deal of information in science is transmitted vertically, from mentors to mentees within labs. However, like plasmid movement, horizontal transfer of information from one lab to another also occurs frequently, and sometimes leads to fortuitous outcomes. One such horizontal transfer event helped launch this study, when Eva Top of the University of Idaho gave a seminar at the University of Washington on her lab’s recent work showing that bacterial hosts that had coevolved with one plasmid became more permissive, i.e., better able to retain novel plasmids. Several members of the Kerr Lab were in the audience, having recently discussed the causes and effects of plasmid persistence in bacterial communities. An animated exchange ensued after Top’s talk, and a collaboration was born.

Together we began to pursue the question of how coevolution between plasmids and their host cells affects the fate of these mobile elements in bacterial communities. While there has been exciting research on the evolution of a single plasmid in a single host species, much less has been done on the eco-evolutionary dynamics of multiple plasmids in multi-species communities. Largely because this is hard to do! Even with only two host species and two plasmids, eight different kinds of cells need to be tracked (i.e., a cell of the first species can have both plasmids, either one, or neither; and a similar situation holds for cells of the second species; see Fig. 1). Studying the evolution of this system adds yet more complexity but is important given how rapidly these systems evolve due to the large population sizes and short generation times of bacteria.

Fig. 1. Tracking multiple ancestral and evolved players required a lot of plates! Authors Hannah Jordt and Olivia Kosterlitz in front of a subset of the required plates for one assay in this study.

The idea behind our study was simple. Plasmids are generally considered costly to their hosts, which can lead to rapid plasmid loss in environments that don’t select for the plasmid (e.g., a drug-free environment when plasmid genes encode resistance). However, host-plasmid coevolution in a plasmid-selective environment can favor compensatory mutations that reduce the burden of the plasmid and temper its rate of loss under non-selective conditions (see Fig. 2). Thus, coevolution can “stabilize” a plasmid. Here, we focused on how such stabilization would affect the emergence of MDR in a two-species community with two distinct plasmids, where each encodes resistance to one distinct drug. As shown in Fig. 3, the chances that horizontal transfer moves one plasmid into a cell already containing the other increases if prior coevolution has stabilized the plasmids. That is, coevolutionary stabilization is predicted to intensify novel MDR emergence. 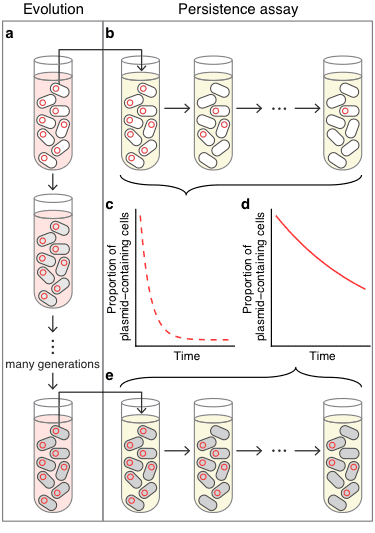 Fig. 2. We predicted host-plasmid coevolution in the presence of plasmid-selection (a) would lead to increased plasmid persistence (d) when selection for the plasmid was removed (e). The plasmid prior to evolution would not be as persistent (c) when grown in the absence of plasmid selection (b) due to the initial cost of plasmid carriage. (For the drug resistance plasmid, pink means presence of the plasmid-selecting antibiotic, yellow means no drugs).

Fig. 3. We predicted host plasmid coevolution in the presence of plasmid-selection within two distinct host plasmid pairs (a) would lead to greater stability of each plasmid in a two-species community without plasmid selection (e), and thus a greater chance that both plasmids would collect inside a single cell (d). Combining these two host-plasmid pairs in the absence of plasmid-selection prior to evolution (b) would result in very few cells with both plasmids due to the initial instability of these plasmids in their respective hosts. (For drug resistance plasmids, pink and light blue means presence of plasmid-selecting antibiotics, while yellow means no drugs).

And indeed that is what we found! Host-plasmid coevolution in the presence of antibiotics resulted in increased plasmid persistence, permissiveness, and ultimately emergence of MDR in bacterial communities. Not only are there implications for the origins and spread of MDR cells, these findings also have implications for the emergence of MDR plasmids; i.e., an increase in cells hosting multiple plasmids opens opportunities for the creation of single plasmids with multiple resistance genes via genetic recombination or transposition (see Fig. 4). Such mosaic plasmids would exacerbate the problem of MDR spread within bacterial communities, due to easier vertical and horizontal transfer of the relevant genes.

Fig. 4. Two plasmids conferring MDR on a host cell have the potential to recombine into a single MDR plasmid via genetic rearrangement (antibiotic resistance genes shown as wedges).

This first glimpse into the effect of evolution on community-level plasmid dynamics leads to many more questions. For example, how do mutations that affect the plasmid’s rate of horizontal transfer (conjugation) or vertical transfer (segregational loss) impact plasmid dynamics within complex communities? Our own Top-Kerr community is excited to continue exploring some of these questions together. We have come to appreciate that even though horizontal transmission of antibiotic resistance can lead to negative consequences for human health, the horizontal transmission of ideas within collaborations like ours is entirely positive for the advancement of science. 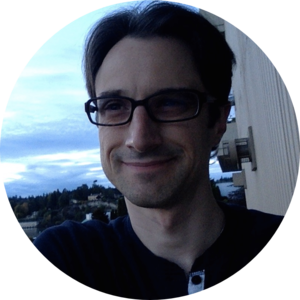