It started with a straightforward question: Where do different populations of a migratory songbird go when they migrate? The answer, we thought, might hold the key to guiding the conservation of declining populations of a once-common species. The miniaturization of tracking technology has allowed entry into a new frontier in the study of migratory songbirds to finally answer this age-old question Audubon and colleagues had over 200 years ago. The reason for our question was to try to shed light on why the Swainson’s Thrush, so common along central coastal California, was so rare in seemingly suitable habitat in the Cascade-Sierra mountain ranges just 250 kilometers away. Building off of an earlier study we conducted on the coast at the Palomarin Field Station, in 2014 Point Blue Conservation Science began collaborating with the Tahoe Institute for Natural Science to attempt to answer this question.

Chasing the answer would take us from fog-swept streamside forests, to dog-haired thickets of alder on the slopes above Lake Tahoe, to willow-lined bogs in the shadows of Cascadian volcanos. The big catch, and where the matter-of-fact methods in our paper don’t do service to the effort required, is that to do this we had to capture these 30 gram birds and fit them with a tracking tag small enough for them to carry. Then we released them wearing the tracking device, and we returned a year later – after their marathon journeys to the tropics and back – to re-find them, recapture them, and remove the tags!

This process was a shared adventure full of disappointment and elation that tested our over a century of collective experiences in field ornithology, bird behavior, and the natural history of our study species, along with our patience and persistence. We had to think like a thrush, and sometimes act like one. Many hours were spent lying on our backs, crouched in a bush, sitting in standing water, letting mosquitoes bite rather than risk swatting them and spooking the bird we were seeking. Traversing the places used by the retiring thrush, whose favorite haunts tend to be the deepest darkest thickets, led us to extreme bushwacking, often on our hands and knees following what sometimes turned out to be very fresh black bear tunnels through dense vegetation. When we were successful at luring one of our tagged birds into the mist nets, we were thrilled that our intuition allowed us to recapture this shrewd, trepidatious creature, so capable of evading capture time and again. The thrill of the hunt was quickly overtaken by anticipation of the possibilities of what  treasure of data was contained in the tiny backpack it had carried for the past 12 months.

What we discovered surprised us. Swainson’s Thrushes from all three breeding regions studied – which were only 140-270 kilometers apart – migrated to distinctly different wintering regions in Latin America. Even those from nearby regions within the Cascade-Sierra migrated to different areas. These differences exposed Cascade-Sierra thrushes to far greater vulnerabilities, based on longer migration distance and more landscape-level forest loss.

As with many migratory species, enhancing populations of Cascade-Sierra Swainson’s Thrushes will require actions across more than one region and country. In this time of great environmental change, preserving the genetic diversity that exists within different populations of species will be critical to allowing them to adapt to a novel world, and knowledge of the vulnerability of populations will be critical to directing limited resources to conserve them. 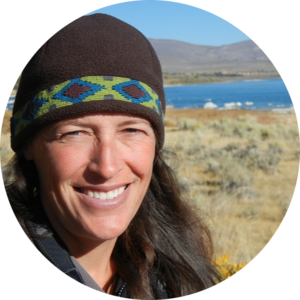