An experiment with complications

As a young scientist interested in evolutionary theory, an experiment with the potential to help resolve the lek paradox (i.e. how genetic variation for sexually selected traits can be maintained even under strong sexual selection) sounded very appealing to me. Little did I know what was to come.

The first issue that became apparent was that the radiation source at Uppsala University had been shut down in between the conception of the experiment and the actual start of the planning due to safety issues (probably in our favour). Fortunately, the machine was just moved to another facility and we could still provide our beetles with their dose of radiation. The only matter to be solved was how to get our tropical beetles to a place that is a short drive away from our lab, during the Swedish winter, without them getting frostbite. We solved this by packing styrofoam boxes containing bottles and bags of hot water, and transported them in a rented car which was heated up to 25°C. Imagine having frostbite and getting a 25 Gy dose of gamma radiation within 24 hours (the LD50 for humans is approximately at 5 Gy). For everything that followed the irradiation, I could fortunately rely on David´s help in the lab despite him having shingles (except for the day his daughter hit her head in Kindergarten and he had to rush to the emergency halfway through the day’s work).

From the second generation onward, things went mostly as planned. I already knew that, depending on the dates of our irradiation appointments, Christmas Eve was going to be the time of peak emergence and that the inbreeding protocol we wanted to use to reveal recessive mutations would drag out well into the summer. What I was less aware of at that point, were all the follow up experiments necessary to try to understand our results.

The results of our initial experiment pointed towards a – in the long run – positive effect of sexual selection on population fitness. Strong sexual selection in males purges deleterious alleles, which increases condition, which in turn increases the resources available to an individual for investment in functions such as germline maintenance. On the other hand, we found an immediate negative effect of male-male competition and mating on the number of mutations transferred to the next generation. Previously before submission, I ran two additional experiments (mating behaviour and ejaculate investment) to get to the bottom of our results and after the first round of reviews everything pointed towards a necessary additional experiment. Having eight weeks to respond to the reviewers, I started to search for a working protocol to count sperm in this species, prepare the beetle lines (a generation of common garden and the experimental generation totalling seven weeks), and eventually count some sperm. Our effort for this experiment culminated in three days of me counting sperm and analysing the data, and David simultaneously writing it up.

In retrospect, we can say that it was worth every minute and I could not be happier with the first chapter of my PhD-thesis. We are not offering the definite resolution to the lek paradox, but our study certainly presents a mechanism that could contribute to resolving the paradox, and hopefully open up an avenue for future research.

You can find the paper here. 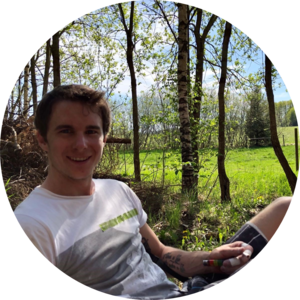