Menu
A community from Nature Ecology and Evolution
Contributor Nature
Behind the paper, News and Opinion

My colleagues and I recently named and reported a remarkable new bird fossil from the end of the Age of Dinosaurs. The fossil appears to be the oldest uncontroversial record of a modern bird yet discovered.

We have formally named the new fossil bird Asteriornis, although we have been calling it "the Wonderchicken" ever since we first laid eyes on it in 2018. The fossil appears to be the oldest uncontroversial record of what is technically known as a crown bird—that is, one that falls within living bird diversity. Remarkably for a fossil bird of any age, it preserves a beautiful, three-dimensional skull.

As students of avian evolution, we were thrilled to have a chance to learn from this amazing fossil. Any palaeontologist will tell you that fossils are indispensable to the study of evolution on a grand scale; after all, fossils provide the only direct glimpses of evolutionary history in deep time. Considering the age of the fossil (66.7 million years), Asteriornis has potential to shed light on a host of big questions about the origins of modern birds that have remained elusive until now, including where and when modern birds originated. Moreover, Asteriornis derives from rocks that predate the end-Cretaceous asteroid impact by only 700,000 years. Therefore, it has potential to clarify the biological features that helped crown birds survive the mass extinction event that wiped out all of their non-avian dinosaur cousins and many other organisms on land and in the sea.

Three-dimensional rendering of the skull of Asteriornis (the Wonderchicken) from high-resolution CT scans. This is Extended Data Fig. 2 from our paper. © Daniel J. Field.

So, we’re pretty pumped up about this fossil. Since I started as a bird palaeontologist in graduate school in 2010, I’ve imagined what the world’s birdlife was like at the end of the Cretaceous. Unfortunately, however, it has been difficult to draw strong inferences about modern birds from this point in Earth history, as the fossil record from this interval is extremely sparse. The bird evolution community—myself included—has put forth many hypotheses on the subject, but I never imagined the incredible shock of actually finding a beautifully preserved skull of a bird from this key point in the history of our planet. Amazingly, that’s exactly what happened on December 18th, 2018.

At the time, I had just started a faculty position in the Department of Earth Sciences at the University of Cambridge. One of the great things about studying palaeontology here is the Cambridge Biotomography Centre (the CBC), a world-class CT imaging facility operated by Ket Smithson and associated with the fantastic University Museum of Zoology. So, it was with some excitement that I went over to the CBC for my first high-resolution CT scanning appointment since arriving at Cambridge.

I brought with me a fossil loaned to me by my colleague Dr John Jagt, curator of the Naaturhistorisch Museum Maastricht, a natural history museum in Maastricht, The Netherlands. The specimen was originally collected in a Late Cretaceous rock quarry in 2000 by a healthcare worker and avocational fossil hunter named Maarten van Dinther. Maarten had donated the intriguing but not visually arresting specimen to the museum years before and it had remained unstudied since then. It consists of a small lump of chalky limestone with a couple of busted-up leg bones poking out.

Looking for new fossils in the Type Maastrichtian of Belgium. This is the edge of the shell of a giant marine turtle from 66.7 million years ago named Allopleuron. Photo credit: Johan Vellekoop.

The specimen didn’t seem too promising, and in truth the CT scanning appointment was mostly an opportunity to ‘break the ice’ working with the Cambridge Biotomography Centre. My PhD student, Juan Benito, came along, and together we took a look at the results of the scan of the rock with the femur poking out: a manipulatable 3D digital image. The beauty of microCT scanning is that it allows palaeontologists to peer beneath the surface of a fossil-bearing rock by digitally removing lower density rock matrix and visualising the higher density fossil bones. When we did this in order to see the underside of the femur, Juan and I had the shock of our lives: materialising from within the rock, we found ourselves staring face-to-face with the skull of a bird, only 1 mm beneath the femur! I almost fell out of my chair.

The main fossil block with the low-density rock progressively removed to reveal the Wonderchicken skull inside. Scale bar is 1 cm. This is taken from Extended Data Fig. 7 from our paper. © Daniel J. Field.

Ket Smithson (the CT operator) was in the hall at the time, and quickly burst back into the lab when she heard me and Juan screaming. I think she may have thought that we'd broken the CT Scanner! The skull we could see was indisputably that of a modern bird, toothless beak and all, but unlike any bird skull that had ever been seen before.

After a year of anatomical comparisons done in collaboration with Juan, Albert Chen (also a PhD student in my research group), and Dr Dan Ksepka (Curator of Science at the Bruce Museum, Connecticut), we now understand why the skull looked so strange. It combines features that are diagnostic of two major lineages of living birds. Some of its features are indistinguishable from those of living duck-like birds, known as Anseriformes. Other features closely resemble those of chicken-like birds, known as Galliformes. Together, these two groups form a bigger grouping or clade called Galloanserae. Previous work has hypothesised that these groups most recently shared a common ancestor sometime near the very end of Cretaceous times, known as the K–Pg boundary.

Comparison of the skulls of living Galliformes (left) and Anseriformes (right) with the Wonderchicken (Asteriornis, centre). The front of the fossil skull shows important similarities to galliforms while the back of the skull is more similar to anseriforms. Images not to scale. © Daniel J. Field.

The myriad features of the Asteriornis skull that resemble galliforms and anseriforms suggest that our fossil is close to the most recent common ancestor of these groups. Consequently, it is providing extraordinary insight in the nature of the skull early in the evolutionary history of Galloanserae and crown birds in general.

Most parsimonious phylogenetic position of Asteriornis, near the last common ancestor of Galliformes and Anseriformes. © Daniel J. Field.

Crown bird fossils from the end of the Age of Dinosaurs are among the most sought after finds in the world of vertebrate palaeontology. That moment in the CT lab in December 2018 was the first time anyone had seen a well-preserved crown bird skull of that age. Even though Asteriornis, which will always be ‘the Wonderchicken’ to me, tells us a lot about the early evolutionary history of birds that we didn’t know before, there are many more macroevolutionary questions about the origins of birds that will require new fossils to come to light to answer definitively. So, it’s time to start imagining what kind of gaps in our knowledge the next big fossil find will fill—and, with luck, some lucky vertebrate palaeontologist will get to experience the same incredible shock that Juan and I felt back in December 2018. 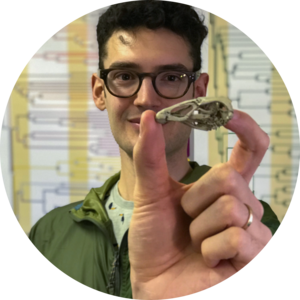 Same comment as I posted on the paper's site. For their new taxon, Asteriornis, Field et al. 2020 propose a node basal to the traditional clade, ‘Galloanserae'. A competing cladogram (link below) nests Asteriornis at a derived node alongside Chauna, the screamer, within the Galliformes. The overlapping of the nasals over the frontals in Asteriornis is not shared with any other taxa, supporting a terminal node for Asteriornis. The competing cladogram also nests the Galliformes far apart from the Anseriformes, but notes the screamer sister, Heliornis, is a duck-mimic with grebe-like paddling feet. This sort of convergence may be the source of the present taxonomic confusion over 'Galloanserae'. Additionally, the older Cretaceous taxon, Patagopteryx, nests as a crown group sister to the ostrich, Struthio, in the competing cladogram. Thus, Asteriornis is not the oldest known crown group bird. Patagopteryx was not tested by Field et al. 2020. Details and cladogram here: https://pterosaurheresies.wordpress.com/2020/03/19/asteriornis-oldest-crown-bird-fossil-yet-discovered-no/