How do we best save biodiversity?

A collection of nature- and human-based solutions from The Annual Darwin Birthday Debate with Lynn Dicks and Alex Dehgan.

The doom and gloom narrative of biodiversity decline in our era never ceases to decorate the mass media. If you are as confused as John Travolta here every time you read the news about the biodiversity crisis, you may want to read a summary of this year’s Annual Darwin’s Birthday Debate, entitled “The Biodiversity Crisis: Innovations and Solutions”.

Darwin’s ideas were not fondly accepted by all and ignited debates from their very conception. The most famous one was the “Great Debate” between Thomas Huxley and Samuel Wilberforce in the Oxford Museum, specifically in the place they now call the Huxley room. Therefore, there is no more appropriate way to commemorate Darwin’s birthday than conducting a debate, such as the one that was hosted by Centre for Ecology and Evolution (CEE) on 12th of February 2020 in the Natural History Museum, London.

The CEE has made sure this event is held annually since the 1990s with increasingly intriguing topics every year. This year, CEE decided to matchmake between natural-based solutions and human-based solutions in solving the biodiversity crisis.

Going back to nature

Dr. Lynn Dicks from University of Cambridge suggested that we should ultimately resort to nature to solve the biodiversity crisis. Dicks thought that our problem so far lies in our overconfidence with science and technology. To address the loss of pollinators, people have been coming up with all sorts of things such as importing and breeding bees, even making a pollinator drone!

“No matter how many AIs and GPS you have, humans will not manage to pollinate these flowers,” she said as she turned from the drone video into a photograph of a large flower field in her presentation, “We do not need drones.”

Dicks suggested that ecological intensification, or letting farmers actively manage agricultural landscape to maintain ecosystem function, is a better solution. Adding flower strips in the farmland, for example, has proven to increase agricultural yield. Dicks vehemently added that the results are generalizable in many countries including ones with tropical climates.

“We can benefit nature without any loss of yield. This is not a trade off,” she concluded.

The contesting speaker, Dr. Alex Dehgan from ConservationXLab, began his talk by supporting Dicks’s call for solutions that are based on a better understanding of nature.

“I must disappoint you all by saying that I agree with her,” said Dehgan humorously as he opened his presentation.

Collaboration is the key

Dehgan nonetheless approached the solutions to biodiversity crisis from another viewpoint. He saw that the problem of human-induced extinction stems largely from the increasing rate of consumption. We have not been sitting idly in response to this, and conservation science has benefitted greatly from technology in measuring many metrics that are crucial in developing conservation policy. Satellite images have helped us monitor deforestation in increasingly fine time intervals. The rise of the internet has allowed more opportunities to monitor biodiversity occurrences, ranging from amateur watchers to bots. But better data is not enough to save biodiversity; we need to collaborate.

“Great ideas are everywhere, but opportunities are not,” he said.

Alex’s optimistic tone was amplified by the many stories he brought that night of how technology helps conservation, ranging from kosher shrimps to cheap DNA barcode scanner. By reducing the complexity and cost of research and technologies around biodiversity conservation, we can boost public participation and change general perceptions on what we can do about the environment.

“It is not until we incorporate economy and anthropology that conservation is progressing, and this means ecology and evolution can grow to be solution-based discipline,” said Dehgan.

Dicks and Dehgan covered the many kinds of innovations and solutions in solving the biodiversity crisis and the wide spectrum of issues leave little place for dispute. There are lots of problems with the term ‘biodiversity crisis’ and we need to embrace all means possible to undo the sixth mass extinction. Nonetheless, we certainly want to be sure that we are on the right track, and the audiences that night was keen on questioning how people should set their course. Should we actively attempt to stem population increase? If not, do we have the tech to ensure sustainability? If we have, how do we incentivise people to change? Is this an issue for the middle class only? How do grassroots movements contribute to the issue?

How should we do things?

“We should worry less about population as it reaches stable point,” responded Dicks to the question of population growth, “We do not need to increase food production. Instead, we should change what people eat,”

Efficient systems to reduce food waste in cities was also echoed by Dehgan. As we have better urban landscapes, cities can grow to adopt a better system, and this should make us rethink challenges and opportunities.

“As people are getting wealthier and more educated, they will move into the cities, want what wealthy people have, and adopt consumerism,” said Dehgan, “To solve this, we can eliminate choices of goods,”

Dehgan also confidently said that we had the technologies for a more efficient system that could help solving the biodiversity crisis. In the follow up question on how we incentivize people to adopt this, Dehgan admitted that it is a huge area to think about. One thing he really sure about is that the doom and gloom narrative is not working.

“We do not always allow ourselves to change,” explained Dicks, “The lack of awareness needs continuous education,”

Dicks also mentioned that there was vested interest among the companies that produce pesticides that hampered efforts to change best practices around agriculture. A continuous effort to lobby investors in various sectors is therefore necessary to deal with behaviour change. From Dehgan response afterwards, it was apparent that he agreed with this point.

“Stock prize are now driven by perception, not the production of goods. The sustainability issue is driving things,” said Dehgan, “Corporations can be part of the solution,”

At a more grassroots level, Dicks considered mass movements such as Extinction Rebellion to be effective in raising the issue of biodiversity crisis but unfortunately not political will. Nonetheless, Dehgan maintained his optimism around mass movements as he suggested that civil disobedience is useful for attracting everyone’s attention.

The discussion has been largely limited to middle class participants and we might wonder how others should be brought in. As Dicks championed equality for everyone, Dehgan again mentioned that the sustainability market is growing to include all classes and that everyone actually cares about the issue, depending on how it is framed. Consequently, we need to be careful in sharing best practices globally as different circumstances require different approaches.

There are many ways to save nature and we should not confine ourselves to only one single approach. In this regard, Dicks and Dehgan did not disagree, rather they are coming at each answer from a different angle. There is no point of having a winner in this issue; we are all losers in terms of biodiversity crisis.

From the questions and concerns that were raised, there is indeed a paradigm shift in conservation as people keep adopting new ideas and tools in solving the biodiversity crisis. I think Darwin would be proud of us if we used his legacy of natural selection not to justify species extinction, but to follow his example to keep embracing new ideas to understand how to best save biodiversity.

Sabhrina Gita Aninta is a PhD student at Queen Mary University of London, currently trying to get DNAs from museum collections to understand the past population history of Wallacea’s endangered ungulates. 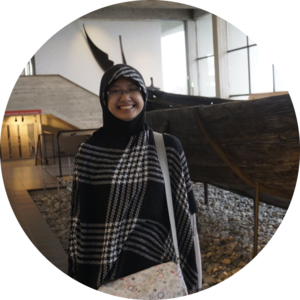 I am interested in conservation biology along with all things ecology and evolution, especially in mammals.
Follow