Menu
A community from Nature Ecology and Evolution
Contributor Scientific Reports
Behind the paper, Journal club

The deep ocean is frequently assumed to be a homogeneous system lacking diverse life history strategies found in shallower waters. Recently a discovery of mouth brooding in a deep-sea fish fills in a gap in the larval literature and prompts further investigation into reproduction in the deep-sea.

I never in a million years would have expected to be interested in dories. No not the lovable, albeit forgetful, Blue Tang from our favorite nautical themed animated films, but fishes in the order Zeiformes, which are also known as Dories (different spelling). My first encounter with this group of fishes was during one of my first virtual expeditions as a shore-based scientist for NOAA's Okeanos Explorer in 2015. Most of my time spent on these virtual expeditions revolved around observing and commenting on the live video feed from Okeanos’s remote operated vehicle (ROV). These feeds were not only watched by the 10-15 shore-based scientists, but also non-scientists back on shore. Okeanos's charter mission is to explore previously unexplored regions of the deep ocean and archive all that it sees via high definition video. Typically I’d have the feed up while I was working on other things and then I’d call into the scientist hotline to chime in with an identification of a fish that the ROV was spotting. One of the fishes I saw on an expedition to the Caribbean Sea was this little guy (notice I don’t chime in with an identification):

I didn’t give an identification because I didn’t know what it was. Turns out it was a Zeiform fish from a monotypic family called Parazenidae, which had only one species: Parazen pacificus. After doing some reading I found out that it had a bizarre distribution: Western Pacific Ocean (Asia and Australia) and Western Atlantic (including Caribbean Sea). That’s it. Nowhere in between. Given that there have been hundreds of collecting trips all along the Eastern Pacific of North and South America and the Eastern Atlantic of Europe and Africa that they were likely two, greatly geographically separated populations. As a taxonomist, this really excited me because I was pretty certain that this was likely two species. So I did what any taxonomist does and read the literature, borrowed specimens from museums and went to work testing my hypothesis that Parazen pacificus was more than one species. That’s where this exciting tale of wild biogeography and taxonomy ends. About 1 day into examining specimens and I peeled back the gill cover (called the operculum) to find this on a specimen collected by ichthyologists visiting a fish market in Taiwan and then deposited at the Field Museum in Chicago, IL:

At first I thought the mouth was riddled with parasites or it had a mouth full of food. Parazen, as it turns out from the video above, are winnowers which means they grab big mouthfuls of sand and sift through it to get their food. Although upon further inspection they seemed to be fish eggs. OK, so Parazen eats fish eggs, done (ummm no). However, when I went to remove the eggs to get a better look at the gill arches I noticed that the eggs were covered in a membrane and they were also attached to the inside of the mouth with alienesque tendril structures. OK things were getting really weird now. Was this fish carrying its eggs in its mouth to guard them similar to many shallow water fishes like cichlids and cardinal fishes? Certainly this couldn’t be true, most deep sea fishes are thought to be broadcast spawners (release eggs and sperm and let nature take its course). I combed the literature and read everything I could on Parazen reproduction and larvae, which turned out to be nothing. In fact, Parazen were the only Zeiform, who did not have a formal larval description, and one of only a handful that did not have a reproductive behavior mentioned. The more I dug, the more signs pointed to mouth brooding. I decided to bounce my ideas of more senior colleagues to see if my hypothesis was viable. I was encouraged by some challenged by others which culminated in a more in-depth description of the eggs and associated structures while also scouring the nearly 600 specimens in museums for more eggs. In order to move forward with publishing the behavior, I began to collaborate with my coauthors Jon Moore, who had published many articles on deep sea fishes, and Edward Stanley, a wizard at soft tissue CT scanning and post processing. We were able to use the CT images to visualize the placement and count eggs while also measuring their size without removing them from the specimen. We were also able to see the gonads to determine it was a female, which was really cool.

Sadly, we had no luck with finding any eggs in the other specimens. This really posed a dilemma for us because it always seems a little dodgy to publish something from one specimen. However, given that deep water fishes frequently invert their stomachs when they experience the dramatic pressure change coming from deep to shallow water and how rare it is to capture a fish, mouthbrooder or otherwise, with any reproductive behavioral data it isn’t surprising. The real kicker for us was the absence of larvae and breeding behavior in the literature and structures and presence of attachments inside the mouth similar to known mouthbrooders. Since most historical larvae were collected via plankton tows at shallower depths, it can be concluded that Parazen larvae were missed because they were being held at depth via mouthbrooding and then dispersing as post-larvae at depth! So not only was this chance observation of a rare deep-sea fish on an ROV amazing, but it was punctuated by an extremely unlikely collection of a specimen that had eggs perfectly preserved in it's mouth. Sometimes things just come together naturally. While a few of our colleagues are still skeptical, the majority agree with us that this is truly a wonderful discovery that highlights the need for deep sea biologists to throw assumptions aside and challenge what we think we know about deep-sea ecology and evolution.

Adam and Eve our ghostly ancestors? 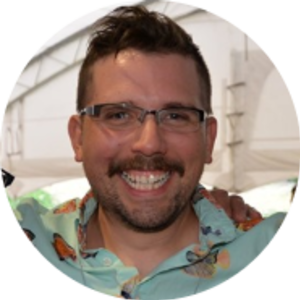