Mediterranean chondrichthyans: some resist fishing exploitation, but others do not

Chondrichthyans (sharks, rays and chimaeras) are a vulnerable group that has been overexploited for almost half a century in the Mediterranean.

But, what are chondrichthyans?

They are members of the diverse group of cartilaginous fishes (class Chondrichthyes) that includes the sharks, skates, rays and chimaeras.

Why do we study them?

Chondrichthyans are a vulnerable group that has been overexploited for almost half a century in the Mediterranean. The International Union for Conservation of Nature (IUCN) has recently revealed theMediterranean as a key hotspot of extinction risk for chondrichthyans, where more than half of the species assessed (39 out of 73) are considered to be threatened: 20 Critically Endangered, 11 Endangered and 8 Vulnerable. On a global scale, of the 20 species that have been assessed as Critically Endangered, seven have some part of their distribution in the Mediterranean.

Why are they in a critical situation?

In the Mediterranean, a notable change in marine ecosystems has occurred due to anthropogenic impacts, with overfishing as one of the most important. The temporal evolution of chondrichthyan landings has gone through three stages: a development phase at the beginning of the 1950s; followed by intense fishing pressure from the mid 1950s to 1970, corresponding to the exploited phase; and a decreasing trend from 1970 to recent years, indicating an overexploited status. This overexploitation in chondrichthyans is to be expected due to their life-history traits (slow growth, late maturity and low fecundity).

Are chondrichthyan populations difficult to assess?

Unfortunately, most species are taken as by-catch in bottom trawl fisheries. By-catch volumes and species composition are poorly documented and rarely incorporated into international statistics, therefore the impact of fishing on their populations is difficult to assess.

So how can we study them?

For this study, fishery-independent data were used. These data were obtained from MEDITS (Mediterranean international trawl survey programme) bottom trawl scientific surveys carried out from 1994 to 2015 along the Mediterranean Iberian Peninsula and the Balearic Islands. These surveys are carried out on board to the oceanographic vessels for three weeks on average. From my point of view, these scientific surveys are particularly important, since, in addition to obtaining biological data, they serve as training for students.

What is the current status of Mediterranean chondrichthyan populations?

Our results reflect fairly stable populations in terms of diversity, with some increase in density and standardized biomass of some species dwelling on the continental shelf (small spotted catshark, spotted torpedo and thornback skate), and even for some species dwelling on the slope (blackmouth catshark). In contrast, decreasing trends were observed in some deep-water species (longnosed skate and velvet belly lanternshark). These results can be explained by the evolution of the trawl fishery (reduction of effort on the continental shelf and displacement to deeper waters) over the last few decades, jointly with the great resilience displayed by some species. Therefore, our trend models reveal that most of the sharks and rays currently making up these communities have resisted the impact of fishing on the western Mediterranean over the last two decades.

What is an evolutionary response to overfishing?

It is known that fishing overexploitation could alter size structure and population parameters (e.g. fecundity, maturity, growth rate) on marine populations in response to changes in species abundance (density-dependence change). In this study, a decreasing trend in maturity in the small spotted was detected, probably as an evolutionary response to the general overfishing of the demersal populations exploited by bottom trawl fishery since the 1980s in the study area. This early maturation, an adaptive response that increases the likelihood of offspring reaching maturity, could have promoted the present recovery of this shark species. This is the first case of early maturity recorded in a shark species in the Mediterranean.

Although the present study provides a current baseline scenario of chondrichthyan populations in the Mediterranean, it is important to conduct new studies (e.g. biological, genetic, fishery) on the most vulnerable species, in order to implement management measures that will strengthen or initiate the recovery of chondrichthyans in the Mediterranean, whose populations play an important role in marine ecosystems, and to develop true adaptive management in the area, making the sustainability of trawl fishery compatible with the conservation of marine ecosystems.

Dr. Ramírez-Amaro has a Postdoctoral Contract, co-funded by the Regional Government of the Balearic Islands and the European Social Fund, in the Baleares Oceanographic Centre of the Spanish Institute of Oceanography. His research topics include elasmobranchs, genetics, population dynamics, connectivity and fisheries. 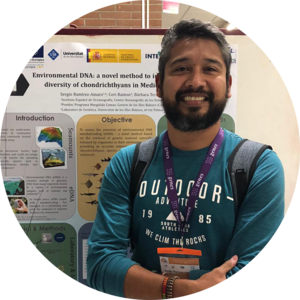