Paleogeneticists reveal that between 8000 and 3000 B.P. there was a population very different genetically from present day Bantu-speaking groups

Reminiscing about the past, I vividly remember a series of field excavations that I did in France, Belgium, Egypt, Jordan, Israel and Cameroon. One of them influenced me more than any other. This was an archaeological excavation in the Grassfields of North-West Cameroon, at the site called Shum Laka. In the 1990s, I was a student and a collaborateur scientifique at the Institut Royal des Sciences Naturelles de Belgique. Having finished my M.Sc. at the University of Bradford in human osteology and palaeopathology in 1992, I sought work opportunities outside Europe to use my newly learnt skills. Late 1993, I joined the team of Professor Pierre de Maret (Université Libre de Bruxelles), who had from 1991 been excavating the Shum Laka rockshelter in collaboration with Prof. Raymond Asombang (University of Yaoundé). This was my first excavation in Africa, and I realized how important the region and the site were for African Archaeology and studies on population history. Already then, the Grassfields were considered the cradle of the Bantu languages, but also as a key area for the development of pre-agricultural economies, which later spread to the whole sub-continent. The site itself, located in a mixed landscape of savannah-forest, is nested on the slope of ancient volcanic mountains. Despite a tropical climate, not ideal for bone preservation, it revealed surprising discoveries (Figure 1).

Throughout January and February 1994, two exceptionally well preserved and complex burials (8000-3000 B.P.) were discovered in addition to those from the previous field excavations in 1991 (Figure 2). The total number of individuals recovered increased, as well as, the diversity of burial types (ranging from primary to secondary burials).

In the 1990s, we did not have 3D technology, so the finest details of these burials were recorded using photography, drawings and field notes. Of great interest was a double burial that contained two children (Figure 3). A four-year-old child in a foetal position was found lying just over the legs of an adolescent (see drawing of Figure 3: skeletons in blue and pink respectively). What was the relationship between these two individuals, so closely positioned? Were they from the same family? Was this rockshelter used as a family cemetery?

Other questions were raised as well. We dreamt about the genetic identity of these skeletons. Were they the first Bantus before their dispersal or the first Pygmies in contact with pre-agricultural groups? This field experience inspired me for the rest of my life, as my future research focused on related topics (i.e. exploring past/present morphological diversity and interactions in sub-Saharan Africa). And finally, our little dream we had in 1994, came true in 2018, when paleogeneticists from the Harvard Medical School (Mark Lipson, David Reich and their team) succeeded in extracting ancient DNA from inner-ear bones sampled from four children crania (Figure 4).

Genetical results (Lipson et al. 2020 Nature) were closely analysed in conjunction with other disciplines, as a long list of researchers (involving myself) contributed to doing this. Amazing facts were revealed about the ancestry of these Shum Laka children. They all appeared to be very different from that of most Bantu-speakers today and derived mainly from a previously unknown lineage distantly related to present-day West Africans. Nevertheless, their unique genetic diversity still showed some links with present populations: one third of the ancestry derived from a lineage closely related to central African hunter-gatherers and a rare paternally inherited trait (A00) was found again (previously observed only in a few groups living close to Shum Laka).

Logical discovery or a surprise? These results might underline that this key area, the Grassfields, is more complex in terms of population history than had previously been thought. The region might have been occupied by a more diverse range of populations, not necessarily all ancestral to Bantu-speakers. Nevertheless, Shum Laka’s rockshelter appears to have been used to bury family members who were genetically similar to each other for about 5000 years. Then what happened to them? Were they partially replaced by present day Bantu-speakers? Most probably.

Of course, the story about these Cameroonian pre-agricultural populations does not end here. We recently tried to compare the genetic results with the morphometrical ones. For example, the adolescent buried with another younger boy (Figure 3), with shared familial links, exhibited the rare Y chromosome haplogroup, but also a unique inner-ear morphology of the temporal bone (Crevecoeur et al submitted). Here morphology and genes seem to match perfectly! However, in order to explore further the variation within Shum Laka, my students, other collaborators and myself are currently analysing morphometrically the entire sample (Ribot et al in preparation). Hoping that our results will help to better understand not only the population diversity and history of the region. 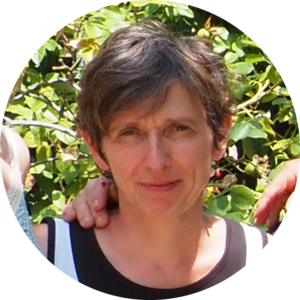 After 4 years in France (training in Paris I, Master in Prehistory 1989), I continued my studies in England at University of Sheffield and Bradford (MSc in Osteology, 1992), and then worked 5 years at the Institute of Natural Sciences and RMCA, Tervuren. Between 1997 and 2002, I returned to England at the University of Cambridge, for a M.Phil. and a Ph.D. in biological anthropology. Between 2003 and 2005, I carried out 2 postdoctoral positions at the University of Cape Town (Medical School, Archaeology), before working in Canada (University of Montréal). My research focuses on various aspects of bioarchaeology in Quebec (i.e. health, diet and mobility of 18th-19th c AD populations) and in Africa (i.e. past morphological diversity, interactions between hunter-gatherers and agriculturists, IA/LSA/colonial archaeology).
Follow