How are animal body plans constructed and why are some more diverse or successful than others? In our recent Nature Ecology and Evolution study, we show how developmental and adaptive changes can work together to generate functional diversity in biological structures over geological timescales.

This project began with my interest in the mammalian axial skeleton as a case study for understanding the relationship between adaptation and constraint in biology. As a meristic, or serially-repeating system, the axial skeleton is highly constrained by integration or covariation between repeating vertebrae. However, in mammals these constraints have been overcome by subdividing the column into distinct modules or regions that are patterned by Homeobox genes early in development and provide the evolutionary flexibility to generate weird and wonderful functions (think of the giraffe’s neck or cheetah’s back). In previous work, coauthors and I have quantified the evolution of these regions using vertebral anatomy (see this paper in Science). While it is presumed that regions can trigger functional diversification by allowing vertebrae to adapt independently of one another, this hypothesis was untested. Therefore, we set out to quantify the relationship between vertebral regionalization, function, and evolutionary diversification.

To measure vertebral function we used biomechanical experimentation on animal cadavers. We selected two model species for which cadavers were readily available, one mammal with highly developed regions (house cat) and a lizard with uniform vertebrae (tegu). Most biomechanical studies of vertebrae focus on just a few joints, but we needed to measure function across complete presacral vertebral columns (around 25 joints) of two species, with multiple specimens (n=18), four different bending directions, and repeats, which equated to LOTS of data collection. We were fortunate to have the help of a highly-motivated undergraduate student, Sarah Gonzalez, whose enthusiasm for the project and skill was invaluable! These data showed that while some vertebral regions function differently to one another, many regions did not. For example, the tegu backbone consisted of several distinct morphological regions despite its highly uniform function. Therefore, regions alone cannot explain the evolution of functional diversity, there is also an adaptive component.

Delving further into the problem, we wanted to use the fossil record to try and understand when functional diversity first evolved in the mammalian lineage. Understanding function in the fossil record is very challenging, but luckily our extant sample of form and function across vertebral joints allowed us to get a handle on the problem. We showed that the total morphological disparity in a particular column was a good indicator of its total functional disparity (though distinguishing exact function is much trickier!), and so developed a new approach to estimate functional disparity in fossils taking into account error. We applied this new approach to exceptionally preserved fossils of ten synapsids (the extinct forerunners to mammals) to reconstruct the evolutionary origin of axial functional diversity in mammals. Results suggest that functional diversification occurred late in synapsid evolution, after the evolution of new regions. The group in which this occurs, the cynodonts, is characterized by an abundance of mammalian features, including evidence of a muscular diaphragm, enhanced respiratory capacity, and potentially higher body temperatures (endothermy). Therefore, we hypothesized that a more active lifestyle in the cynodont forerunners of mammals, and associated mammalian behaviors such as grooming fur, likely resulted in strong selection on these existing regions to take on new functions.

Taken together, our study suggests that a combination of underlying developmental regions with the correct adaptive environment is required to drive functional diversification of metameric structures. 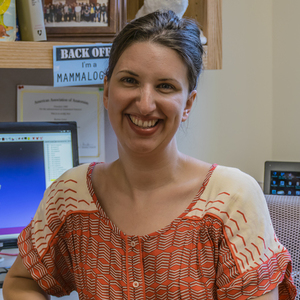 I'm a Research Associate at the Museum of Comparative Zoology, Harvard University. I'm interested in the evolutionary origins of mammal diversity, and particularly the origins and evolution of the axial skeleton.
Follow