In 2011, I visited Indonesia to search for a field site where we could start the first ever field study of the Critically Endangered Javan slow loris, found only on the island of Java, where less than 10% of natural forest remains. Thus finding solutions to replace this lost habitat is vital.

Slow lorises are nocturnal tree-dwelling primates and are unusual in that they cannot jump or leap, but instead have long limbs that allow them to climb and stretch through networks of continuous branches. It thus was not a surprise that we did not find them often in discontinuous secondary forest (which comprise most of Java's protected forest), but more commonly in human-modified habitats characterised by networks of dense vegetation at the edges of farmlands. Such a habitat remains a challenge for this species, because although these 'living fences' provide suitable habitats, animals still must cross up to 300 m of open ground to reach other such fences, where they are vulnerable to predation.

Another challenge in such habitats is that being restricted to narrow corridors of trees and bamboo makes the animals more susceptible for hunting. Slow lorises are persecuted throughout their range for a variety of reasons from traditional medicine to black magic practices to the photo prop trade for tourists. In Java, although all of these threats exist too, the number one reason the very cute slow loris is caught is for the pet trade. Collectors do not receive much money for a slow loris - about the price of half a pack of cigarettes - but they also hunt as a hobby and for fun.

Java is one of the most populated islands on earth, and its people rely heavily on the volcanic rich soils of that area that can provide 3-4 growing seasons per year. Still, some months are drier than others and forms of irrigation are very important. One way this is achieved is through aerial water-hose pipes, which can carry water for several hundred metres without interfering with ground growing crops. These water pipes are highly desired, but installation of one costs about 3 months' salary.

How do all these issues marry together? Fascinatingly, we found that wildlife including tree shrews, Javan palm civets and indeed, slow lorises, use the water-hose pipes to cross their home range and avoid going to the ground. We also found that there was a demand for these pipes by local people, who valued them and when they get one, cared for it because it is an important economic commodity. So we decided to build bridges for both slow lorises and people - a win win for both!

We monitored bridge use from the first day we installed the bridges, by either directly observing them or putting motion triggered camera traps on either end. Within just over a week, slow lorises readily went on the bridges, using them multiple times nightly and even crossing in family groups. We started this programme in 2014, trialling different types of bridges (hose size). By 2016, we arrived at a model that combined water hose with wire to make it stable. This was a great combination, and now we have built more than 20 of these bridges in the home ranges of several groups of animals. Furthermore, lorises increased their home range size and were able to access new feeding trees, such as shown in this video, which is very important in such a fragmented area. A challenge faced was that some farmers wanted a bridge, but in areas without slow lorises. Thus we had to budget for extra bridges to ensure equality in the community, since indeed the bridges were for primates both human and non-human!

We also launched and assessed an associated education programme, informing people about the 'names' and family life of the slow lorises living on the farms, using a form of social marketing. Both adults and children were involved in the programme and received a 'Pride Pack' of the loris that lived on their farm, including a beautiful framed photograph they could keep in their home and a more whimsical illustrated t-shirt showing the loris performing an important ecological function (such as pest control or pollination). As of today, all of our bridges are still standing and we are still building more.

This work was done through long-term community engagement with villagers through annual sports and talent festivals; building of a school; weekly Nature Club events; annual calendar distribution; and a wildlife friendly coffee cooperative project, amongst other activities. Although we consider this a great success, we can't emphasise enough the importance of long-term field projects to come up with such innovative ideas for animal conservation. The support of the people living alongside the animals is absolutely necessary, and many conservation projects still operate without including their voices.  The paper is published in American Journal of Primatology, entitled Artificial canopy bridges improve connectivity in fragmented landscapes: The case of Javan slow lorises in an agroforest environment. 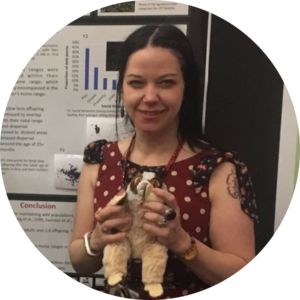