Research into the origins of art, storytelling, and spiritual thinking has long been influenced by European ice age art , wondrous images viewed as milestones in human cultural evolution – even as signs of the first religion. But Indonesian cave art implies the story is more complex.

In our Nature paper we report on the discovery of a cave painting in Indonesia that we contend is the oldest known rock art created by our species (certainly the oldest representational, or figurative, imagery) and also the earliest narrative composition or ‘scene’ in a prehistoric artwork.

Dating to at least 44,000 years ago, this rock painting from the island of Sulawesi depicts enigmatic human-like figures hunting pigs and dwarf bovids with spears or ropes.

The cave art site, Leang Bulu’ Sipong 4, is located in the limestone karst region of Pangkep.

The armed hunters portrayed in the scene appear to have been intentionally depicted as therianthropes: human figures with animal characteristics (the hunters are using human-made tools and generally resemble people, but some have beaks, a tail, and so on).

It was a huge surprise when we first saw this art – initially as blurry Smartphone snaps WhatsApped to us by our local team members who discovered it in December 2017.

We had seen a lot of rock art in Sulawesi, but nothing like this.

Soon afterwards we visited the cave to fully document the art and it was then we observed its dating potential.

Several calcium carbonate nodules (coralloid speleothems) had formed over the cave painting. Based on our prior experience, we knew these mineral growths are datable using the Uranium-series (U-series) method, yielding minimum ages for the underlying art.

In 2014, we announced that a cave in the nearby Maros karsts harbours one of the world’s oldest rock art motifs, a hand stencil with a U-series age of at least 40,000 years. Last year we also showed that a figurative rock painting of a wild bovid from a cave in Kalimantan (Indonesian Borneo) has an equivalent minimum U-series age of around 40,000 years.

The Leang Bulu’ Sipong 4 painting was executed using the same stylistic conventions employed by Pleistocene artists in this region, so we assumed it would be old.

Nevertheless, it came as a shock when the four overlying coralloids we sampled turned out to range in age between 35,100 to 43,900 years.

It is interesting that key hallmarks of sophisticated Palaeolithic art (figurative depiction, scenes, and therianthropes) are all present by at least 44,000 years ago in Indonesia, pointing to deeper origins for these traits in the early human story.

The great antiquity of the therianthropes is of particular note.

Previously, the earliest such depiction was the ‘Lion-man’, an ivory figurine of a human with a feline head. Carved by Aurignacian people in Germany around 40,000 years ago, this mysterious image had long represented the oldest evidence for our ability to conceive of things that do not exist – a core tenet of religious belief.

This, and other masterful artistic creations of Upper Palaeolithic Europeans, have long dominated scholarly debate on the origin of 'true' art and modern spirituality.

However, hunter-gatherers in Indonesia appear to have been imagining and creating images of fantastical part-human, part-animal creatures long before Europeans.

Is the Leang Bulu’ Sipong 4 painting the oldest picture of a religious myth or story?

We may never know, but this early artwork has put us into the minds of Palaeolithic people in Indonesia like no image we have ever seen before.

The Greatest Animal Migration on Earth 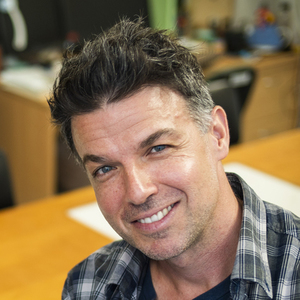