“Any friend of the lemurs is a friend of mine!”  That’s what the legendary Curator of Physical Anthropology at the American Museum of Natural History, Dr. Ian Tattersall, said to me the first time I met him.  He then handed me a new book that he had coauthored: the first edition of the Field Guide to the Lemurs of Madagascar.  I took that copy with me on my first several trips to that wondrous island.  It still sits quietly in a place of honor on a shelf in my office next to the much larger and thicker subsequent editions of the same tome.  It’s a bit tattered, slightly faded, scrawled with notes and stained with Madagascar’s famous red soil.  But on that day, I held it reverently in my hands, clean and new. A guide not only to the lemurs, but to my future as a lemur researcher.  Dr. Tatterall gave it to me on my first day working for him at the Museum.  I was 14 years old.

A couple of years later (a story for another time), I talked my way onto a research team in Madagascar.  During that first trip, I spent a few weeks in the forests of Ranomafana – one of the most exceptional research areas on the island, with about a dozen species of lemurs.  In the following years, I returned to explore all of the far corners of the island checking off species after species in Ian’s book.  By the time I made my fourth trip, when I was 19, I had gone to the most accessible spots and seen the most easily spotted lemurs, but the one lemur that I most wanted to see required more of an expedition – in order to see a wild aye-aye, I was going to have to literally leave the beaten path.

The aye-aye (Daubentonia madagascariensis) is the most bizarre primate in the world.  Not only is it the largest nocturnal primate in the world, and the only living member of its whole family (the only other member was likely hunted to extinction by the first Malagasy and is estimated to have been four or five times as large as the living aye-aye!), but it also has a suite of derived morphology, most of which is unique for a primate.  For instance, it has ever-growing incisors – so strange for a primate that the earliest morphologists classified the animal as a kind of squirrel.  It has highly elongated fingers, the third of which has a ball-and-socket that can swivel like a shoulder, and it is so thin that the animal habitually rests it on its even longer fourth finger for support.  The aye-aye uses this strange finger along with bat-like hearing to echo-locate (yes, this is also unique among primates!) by tapping it, many times each second on rotting wood to create a mental map of pathways carved by the grubs within.  Then it bites a hole – often at the intersections of these pathways for maximum efficiency (did I mention that it has the largest brain of all lemurs?) – and inserts the swiveling finger tipped with a needle-like claw to skewer its prey.  Not only does it hunt insect larva using this remarkable suite of anatomy, but it also uses its thin finger to dip out the contents of bird eggs and its powerful teeth to easily access even the toughest nuts.  In fact, I remember seeing slivers of brass chiseled out of the side of a padlock that had mistakenly been used in an aye-aye enclosure.  I guess the animal was curious to see whether any tasty morsels occupied the mechanism that was a bit too difficult to access via the key hole.

Of course, I had to see one in the wild.  Aye-ayes are so cryptic that they were once thought to be nearly extinct.  The worry was so great that, in 1966, a group of nine of them were released on the island of Nosy Mangabe – a small spit of land protected in the cove between the great Masoala Peninsula and Madagascar’s east coast.  We now believe that aye-ayes are likely the most widely distributed species of lemur (though many of us would not be surprised if it turns out that there are actually multiple species of this rare animal), but the population of animals that was established on that small island is one of the best places to try to see this secretive animal.  Although “signs” of the aye-aye (nests and gnaw marks) can be found all over Madagascar, if you want to see the animal itself, Nosy Mangabe is one of the best bets.  That’s how I found myself vomiting over the side of a boat in search of the strangest primate in the world.

At less than twice the size of the Bronx Zoo, there were no roads or any real structures on Nosy Mangabe – just some camp sites near the shady beach and pathways carved out of the dense forest.  Once my stomach settled and I was able to explore a bit, it was easy to find white fronted and ruffed lemurs foraging in the afternoon sun.  These eastern lemurs are relatively easy to spot in other places on the mainland, but it is always thrilling to see a wild primate and, as Ian noted, I have always been a friend of the lemurs.  However, every increment that the sun inched toward the horizon reminded me of the real reason I was there.  I had dreamed of seeing an aye-aye tap foraging or gouging into a coconut or slurping an egg.  Although I had seen aye-ayes doing all of this in captivity, fishing mealworms out of a 2x4 just isn’t the same!

It took a few hours of silent hiking to hear the telltale scratching overhead.  Not really the sound of nails on a chalkboard.  More like the whisper-like chipping sounds that pet hamsters make while eating pellets.  After a few minutes of barely breathing, waiting long enough that the animal got used to my presence, I turned on my flashlight – one strategically weak enough to not disturb it too much.  Fittingly, the aye-aye was doing a behavior that I frankly didn’t even think possible: for reasons that I cannot fathom, it was climbing on the underside of a huge branch, at least three feet in diameter.  It could have easily walked above the branch, like every other primate I have seen in the wild, or perhaps suspended itself below a small branch, like monkeys and lemurs sometimes do while reaching for foods.  But no, this particular animal, smaller than the average cat, was sprawled under a branch large enough that even a chimpanzee couldn’t wrap its arms all the way around it for support.  The aye-aye was stretched out underneath the branch with its arms and legs splayed away from its body at almost right angles, slowly straddling away from the trunk.  Within moments it ascended beyond the reach of our dim lights, and shortly after that, the whispering scratches of its claws disappeared into the din of the forest.

The encounter lasted only seconds, and yet, I have thought about those mere moments for nearly 20 years.  Since then, I have seen South African lions playing in the morning dew and painted dogs return from the hunt.  I’ve seen howler monkeys disappear in the Central American canopy and Barbary macaques gaze across the Strait of Gibraltar at the haze of Morocco.  And I’ve spent hours with my beloved lemurs during interesting feeding experiments here at home and just peacefully sitting with them in Madagascar.  But I still often think back on that surreal evening with that surreal animal and wonder exactly what was happening.  Was I really seeing what I think I saw?  A primate moving more like a spider?  A lemur with bat-like ears, squirrel-like teeth and the mysterious ability to cling to the underside of a branch like a gecko?  Maybe I was still addled by the sail to the island?

Decades later, I still study lemurs – their behavior and anatomy – and recently, I was able to dissect an aye-aye.  There are only a couple of dozen of them in breeding colonies here in North America, and for a long time I had wanted to study those amazing hands myself.  In the last few years, my students and I have dissected around 200 primates, studying their masticatory muscles and the adaptations of their forearms to various postures and modes of locomotion.  What was initially most remarkable about the forearms of the aye-aye was how unremarkable they are; their muscles are more or less the same size, shape and configuration as all other lemurs their size.  However, as we traced the tendon of one of these muscles down past the wrist and into the hand (most of the strength of fingers is actually produced by the muscles of the forearm), one of these tendons bifurcated and the smallest bit extended to a strange little structure near the thumb.  As we examined the structure further, we noted a small bone and a cartilaginous extension that were moved in different directions by three different muscles.  The little structure – what we realized was a “pseudothumb” – even had its own fingerprint!  After scouring the literature for any reference to the structure – to no avail – and confirming its presence in six other specimens, we realized that we had found something that no one had ever noticed before: the aye-aye has an accessory digit on each hand – basically six fingers!  (Maybe this is how the aye-ayes of Nosy Mangabe can climb sprawled on underside of branches?)  Although this rare feature is found in a few other mammals (most famously, the panda), the aye-aye is the only primate to have a pseudothumb.  Of course it is!

Our paper on this weird anatomy of the weirdest lemur has gained a lot of interest.  Apparently, many of us are lemur lovers. Of course I couldn’t know, as a teenager, that I would eventually be able to add new understanding about this most amazing creature, but my lifetime of fascination was probably just what Ian had hoped to encourage when he gave me his book all of those years ago.  It’s been a wonderful journey.

Learn more about the aye-aye's newly discovered sixth finger in the original scientific paper, and in a video about the study (including me holding the copy of Ian's book) here. 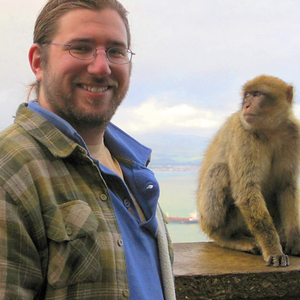