Imagine an organism that has no biological constraints and can thus maximize all aspects of fitness simultaneously. Any deviation from this perfect form will result in an “imperfect” and less fit organism under certain environments. The perfect organism, “Darwin’s Demon”, would eventually outcompete any actual, “imperfect” organism that is constrained during evolution (e.g. polar bears cannot survive in a warming environment). The ubiquity of variation and thus the lack of a single, perfect Darwin’s Demon leads us to believe that no organism can maximize all traits simultaneously and thus that all organisms are subject to trade-offs, where improving one trait comes at the cost of decreasing another trait.

While this belief is both intuitive and commonsense, the demonstration of trade-offs has been surprisingly challenging. Microbial experimental evolution, wherein populations of fast-dividing microbes can be evolved over hundreds or thousands of generations within days or months (equivalent to thousands or millions of years in human), provides a unique opportunity to uncover trade-offs. Scientists have used this approach to evolve microbes and then measure their fitness under many alternative conditions (e.g. hot vs cold environments), to see whether or not increase performance in one condition compromises their performance in another. Unexpectedly, they found that microbes can often improve performances in both conditions simultaneously, suggesting a lack of trade-offs. This is contradictory to the common assumption of universal trade-offs. So, are we wrong about the absence of Darwin’s Demon?

In this study, we conducted experimental evolution by subjecting yeast cells to different evolutionary conditions. In contrast to previous studies of constraint, we used barcoded yeast cells with each cell carrying a 20 base-pair unique DNA sequence that is integrated into a specific locus of its genome. Due to the DNA barcodes, we were able to evolve millions of unique lineages in the same flask, isolate thousands of evolved clones (Figure 1) and assay their performance in a high-throughput fashion. These large-scale assays provide a view of unprecedented resolution of the evolutionary processes (similar to how van Leeuwenhoek's invention of microscope allowed the discovery of many life forms too small to be seen with the naked eye).

Figure 1: clones Yuping isolated for this experiment with one cell in each well of the 96-well plates

After scratching her head for quite a few days, Yuping remembered a conversation she had with Dr. Thomas Ferenci (University of Sydney) during a Gordon research conference in 2017, where Dr. Ferenci commented on her presentation about how evolved clones were distributed in the performance space and later emailed her a paper he and his colleagues published on this subject. Two years after being sent the paper, Yuping dug into her email and read that paper again. Five minutes into reading, she experienced the very real epiphany. The theoretical framework used in that paper, originally proposed by Dr. Richard Levin in 1962, was exactly what was demanded to unify the different evolutionary conditions though the puzzle here was different. After iterating and refining ideas with Gavin and Dmitri, we finally reached the following framework.

Imagine a two-dimensional fitness space, with each dimension representing fitness in one environment or performance of one trait (Figure 2). The fitness space is constrained by a trade-off curve (or Pareto front) that prevents any individuals from maximizing both traits simultaneously (the red dot) and separates the evolutionary accessible space from the inaccessible space (note that the Pareto front could take different shapes, e.g. concave, convex and linear). If the evolutionary ancestor starts on the Pareto front (green dots), improving one trait would come at the cost of decreasing performance in another. By contrast, if the ancestor is located behind the Pareto front (the black dot), it would be able to improve both traits until the front is reached. The fact that some clones were able to improve both or all performances indicated that the ancestor was indeed located behind the Pareto front if one existed (same as evolutionary ancestors used in previous studies). In this case, defining trade-offs by comparing to the wild-type ancestor, as commonly practiced, can be misleading. Instead one must map out the performance space by sampling a large number of adaptive clones selected under different conditions enabled in this study. The existence of trade-offs would be supported by the existence of the Pareto front and the existence of the evolutionary inaccessible space.

Using this framework, we demonstrated the existence of Pareto fronts between two pairs of performances. However, the story didn’t just end here. Trade-offs could result from physical, physiological, structural or genetic constraints. The previous three types of constraints are considered to be static. Genetic constraints, however, can be eventually circumvented via a rare combination of mutations and this genotype can be so rare that it takes many generations to arrive at. One idea proposed by Dmitri was to quantify, in an extreme case, if there was only one base-pair (bp) in the yeast genome that could be mutated to maximize all tested traits and to reach the optimum, what was the chance that we missed it. By doing so, we could determine whether the observed trade-offs, during the short-term evolution as conducted here, could be caused by genetic constraints (in other words, no single base-pair of the yeast genome could be mutated to become optimal). Thanks to the large number of adaptive clones, we found that if such single base-pair existed, the chance to not observe this optimal clone was very slim and therefore that at least in the short-term, evolution is in fact constrained by the lack of appropriate mutations that can break into this apparent inaccessible space.

Overall, we argue that the general approach for the detection of trade-offs is insufficient if most of the time organisms are not found on the Pareto front for the measured traits or performances and we proposed a general approach that solves this paradox. Of course, to do so one must map a very large number of clones so that even if we have this new approach, its application won’t necessarily be easy in most cases.

Our study opens up many new questions and possibilities. For instance, if we further evolve these adaptive clones, will they be able to circumvent current trade-offs? By doing so, we can conclude whether the observed trade-offs are caused by genetic constraints or physiological, or structural constraints. Yuping and Grant Kinsler, another graduate student in the Petrov lab, are currently working on further evolving several adaptive clones and determining their performances (Figure 3). Stay tuned! We has been tweeting the research live (#EvolvingFront).

Furthermore, although not mentioned in this blog, we also determined the genetic basis of adaptation and trade-offs. To further study how their mutations lead to transcriptional changes, metabolic changes and eventually fitness changes will be essential to understand the architecture of cell growth and regulation.

Yuping wishes to thank Dr. Thomas Ferenci for the seminal conversation that inspired the major thought of this project. In addition, a relevant paper from Dr. Uri Alon's group has been inspirational to this project. Yuping also thanks Atish Agarwala, Daniel Fisher, Grant Kinsler, and Chris McFarland for their help on the theoretical analyses. Thanks also goes to everyone in the Sherlock and Petrov lab for their suggestions and Mia Jaffe for designing the barcoded super yeast in the banner. Last, the project would have been impossible without the constant guidance and advice of Gavin and Dmitri throughout the experiments, analysis and writing. 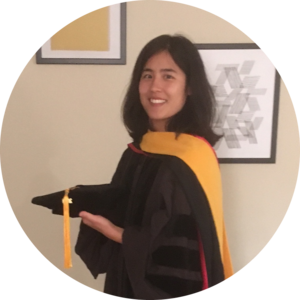 Yuping was a former graduate student in the Sherlock and Petrov labs at Stanford. Her Ph.D. work focuses on understanding evolutionary processes using evolving yeast. She is a postdoc scholar in the Bondy-Denomy lab at UCSF since Oct., 2019.
Follow

Clare Abreu over 1 year ago

Can you provide a link to your paper? Thanks!

Yuping Li over 1 year ago

Clare Abreu over 1 year ago

Oh I see, sorry I missed that. Thanks!

Yuping Li about 1 year ago

No problem. Please let me know if you any questions or comments on it :)