The tropical Andes is one of the most biodiverse regions on earth and its astonishing diversity seems to be associated with altitudinal zonation and geographical isolation.

This pattern was first noticed by Alexander von Humboldt who, during his expeditions in South America, observed that species composition changed along altitudinal gradients. In 1807, after his return to Europe, he published “Essay on the geography of plants” which contained his famous illustration of the Chimborazo showing the relationships among altitude, climate, geography, and plant composition. In this work Humboldt proposed that temperature variations due to altitude are more severe than those due to latitude, and these altitude-driven differences in temperature promote biotic changes.

Humboldt’s ideas influenced many biologists including the ornithologist Frank M. Chapman (1924) who, at the beggings of the XX century, conducted a series of expeditions to Colombia and Ecuador to study the influence of altitude and temperature variation on the distribution of bird species. Among his findings, Chapman described that the Andes have some low-elevation points (passes) that could facilitate lowland species dispersal across the Andes. This hypothesis was recently confirmed in vertebrates using molecular and climatic data, but it remained unexplored in invertebrates.

In 2018, inspired by Humboldt’s and Chapman's ideas, we sampled hundreds of individuals of the color polymorphic spider Gasteracantha cancriformis in Colombia and Brazil, thus including Andean and Amazonian populations. This allowed us to evaluate how the Andes affect the genetic connectivity between populations separated by this mountain range. We found that the Eastern Cordillera (i.e. branch) of the Colombian Andes separates two genetic groups that diverged ~2Mya, coinciding with the final uplift of this Cordillera. Yet, this divergence wasn’t perfect: some individuals from populations at one side of the Andes had the genetic composition characteristic of the populations at the other side. We showed that this pattern is due to gene flow facilitated by altitudinal depressions across the Eastern Cordillera that, as Champan suggested, allow dispersion and further admixture between diverging populations.

Our work demonstrates that the Andes have played a major role in the evolution of this spider, acting as the main barrier that structures its populations. However, this barrier is permeable (particularly at low elevation points) thus allowing dispersion and gene flow between divergent populations. 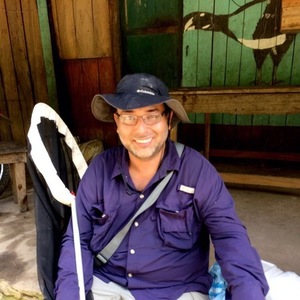 Ruth Milne
about 2 years ago

Christina Riehl
Humbled by Humboldt?
About the Community, Humboldt Anniversary