The hypoxia-responsive HIF family of transcription factors is known to mediate human disease. A combination of structural and evolutionary biology has allowed us to describe the biochemical specialization of HIF1α and HIF2α in vertebrate species.

The question of oxygen comes up frequently when discussing animal evolution. Did increasing levels of oxygen allow for new evolutionary possibilities? How did animals resolve the toxicity of oxygen? But these were not the questions I was asking when I began my PhD. Although oxygen-dependent, VHL-mediated regulation of the HIF transcription factors is critical for oxygen homeostasis in virtually all animals, research is generally centered on human disease and human biology. Case in point, my supervisor (Prof. Michael Ohh at University of Toronto) was keen to look at emergent mutations in HIF2α. Mutations in HIF2α had been associated with twodifferent classes of disease, but a biochemical or structural basis for the genotype-phenotype relationship had not been worked out. With my thoughts firmly fixed on human disease, I got to work performing kinetic binding experiments and protein crystallography. However, as HIF1α is the better characterized paralog, we included it in our interaction studies as a positive control. While clearly observing that HIF2α mutations decrease the affinity for negative regulator VHL, we also noted that HIF1α bound more tightly to VHL. The possibility that HIF1α and HIF2α are biochemically divergent gripped my mind and would not let go. Suddenly, to understand the intricacies of the oxygen-sensing pathway during animal evolution became my research obsession. Whenever I employed a new technique to study the role of HIF2α in human disease, I would also interrogate the evolutionary divergence of HIF1α and HIF2α.

Although the biochemical experiments were straightforward and structural experiments illuminating, I ran into a proverbial wall. The relevance of HIF2α disease-causing mutations was obvious. Clean clinical data, including co-segregation of mutation with disease phenotype, let us know that the variants we were studying were biologically important. But how do you know if a single amino acid substitution in one HIFα paralog is adaptive? That is the question I asked as a fledgling evolutionary biochemist. Multiple sequence alignments to determine if the substitution is conserved? Estimation of non-synonymous mutation rate? A phylogenetic tree? It was clear that I was out of my element. When I am overwhelmed, I find myself going back to the basics. That is how I found myself at the Museum of Natural History in Oxford, taking notes on the major branching points in animal evolution. Those moments, surrounded by primary school students on a field trip and moms with strollers, were among the most inspirational of my studies. The grand story of evolution, with its curious twists and turns, was on full display. Perusing the oxygen-sensing literature, I was amazed to find that simple animals, like placozoa, possess a functional HIF signalling pathway. I returned back to Toronto with a renewed motivation to study the biochemical evolution of this ancient hypoxia-signalling pathway.

We ultimately found that the substitution we were studying is conserved in vertebrates, which possess both HIF1α and HIF2α, but not in invertebrates. The divergence was maintained under intense negative selective pressure. Although we still lack concrete biological evidence that the substitution influences cell signalling or behaviour, the combination of biochemical, structural, and evolutionary findings has us feeling pretty confident that we are on the right track. 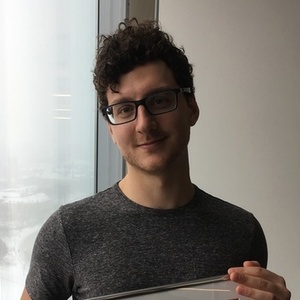