To shed light on the evolution of alarm call systems in nonhuman primates, we flew a drone over West African green monkeys to probe their alarm calling behavior and compare it to their East African congeners, and then conducted playback experiments in which we tested how rapidly the monkeys learnt what the sound of drone meant.

What do monkey vocalizations mean and what can we learn about the evolution of human speech by studying monkey communication? I first began to think about this question when I was an undergraduate student and came across the seminal study of Robert Seyfarth, Dorothy Cheney and Peter Marler on the alarm call system of East African vervet monkeys1. East African vervet monkeys give different types of alarm calls to different types of predators such as leopards, snakes and eagles; the monkeys also evolved different types of escape responses1. The original study, published in 1980 in Science, sparked a vivid debate about whether these monkey calls could be likened to words. This landmark paper paved the ground for a very active research field on the meaning of nonhuman primate signals2,3.

Fast forward to 2007, when we established our field site Simenti in Senegal to study wild Guinea baboons4 and West African green monkeys. The latter belong to the same genus as the famous vervet monkeys of East Africa. Tabitha Price, then a PhD student in our group, decided to study the green monkeys’ alarm calls and compare it to those of the East African vervets5-7.

When confronted with leopard or snake predator models, or real predators, for that matter, the animals reliably alarm called. Yet, any attempts to get them to vocalize in response to model eagles failed utterly. Perhaps our artwork was not convincing? Yet, other monkey species promptly called in response to very similar looking models. Importantly, we never observed alarm calls to real eagles flying above either.

We decided to bring in a drone and fly it over the green monkeys, to expose them to something potentially dangerous in the air that they had never seen before. Would they produce a call we never heard before? Or would they utter a call that resembled the eagle alarms of their East African congeners? Perhaps they would even remain silent? This study was led by Franziska Wegdell, at the time a research assistant in our group.

The drone that we flew over the monkeys. Photo: Davide Montanari.

Members of the Simenti Team 2016. From left to right:
Franziska Wegdell, the lead author of this study, Julia Fischer,
Moustapha Faye, Sonia Dominguez Alba, Lauriane Faraut,
Davide Montanari, and Harry Siviter. Davide controls the drone
with which this photo was made.

Once the animals spotted the drone, they gave alarm calls and quickly ran into safety. In our acoustic analysis, we found that these ‘drone alarms’ clearly differed from calls given in response to leopards or snakes, while they revealed a striking similarity to the eagle alarms of East African vervets. Despite ~3.5 million years of evolutionary divergence8, the call structure essentially stayed the same. In other words, the acoustic structure of these calls is not only hard-wired, but also highly conserved9 (you can find the paper here).

The monkeys’ responses after the first drone flight also provided us with a great opportunity to test how rapidly they had learnt what the sound of the drone stood for. A few days later, we therefore hid a loudspeaker in the vicinity of a monkey that was foraging away from the other group members and played back the sound of the drone. Much to our delight, upon hearing the sound, the animal looked up and scanned the sky. Supported by additional playbacks, we concluded that in the wild, a single exposure to a novel threat can be sufficient for the monkeys to acquire what the sound means. Taken together, this study provides a compelling example of the deep dichotomy between production learning and comprehension learning in nonhuman primates9. The million-dollar question thus is what happened in human evolution to unleash the constraints on vocal flexibility that eventually allowed us to transition from grunts to speech10. 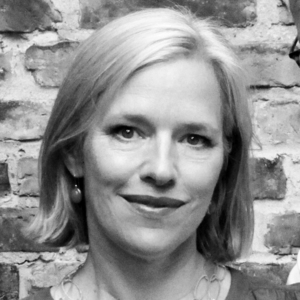 I am a professor for Primate Cognition at the University of Goettingen in Germany, and head of the Cognitive Ethology Lab at the German Primate Center, Goettingen. Together with my team, I study the social behavior, cognition and communication of Old world monkeys, including baboons, macaques, and Savanna monkeys. Our main focus is on the fabulous Guinea baboons whose lives we track at our field site Simenti in the Niokolo Koba National Park in Senegal. We also investigate the vocal communication of Savanna monkeys, and the cognitive abilities of two macaque species. I serve on a number of evaluation committees and advisory boards, and contribute to the dissemination of scientific knowledge by giving talks to broader audiences, visiting schools, and through my book "Monkey Talk" published by University of Chicago Press (2017).
Follow