Soil microbes follow evolutionary rules: even when it comes to carbon cycling

Soil respiration returns about half of the carbon dioxide land-plants fix each year back to the atmosphere. Its response to a warming climate may magnify atmospheric increases in carbon dioxide. We test controversial microbial mechanisms underlying this response and put them into context of a broader debate of how to represent microbes in soil biogeochemical models.

The hallmark of science is debate, not agreement. When Rebecca McCulley, Noah Fierer and I got the proposal funded to carry out the reported work, there was a lot of debate. The debate centered on whether microbial community responses affected carbon cycling. The dominant view was that microbial abundance and identity played no role in determining soil carbon responses to warming.

That might seem like a crazy viewpoint. But the view was common to all the soil sub-models in the Earth system models used to inform the last IPCC Assessment Report. It was grounded in more than a decade of soil ecology arguing for functional redundancy in soil communities. The logic was compelling: given the thousands of individuals and taxa in a spoonful of soil that could decompose carbon compounds, even dramatic community shifts should not alter the function of communities.

A not uncommon narrative took functional redundancy a step further. It was that soil microbes were exempt from evolutionary constraints that affected plant and animal respiration as thermal regimes warmed. That assertion contrasted with data we’d collected from the long-term warming experiment at the Harvard Forest. But the underlying evolutionary mechanism evaded me. That failure-of-understanding on my part saw a reviewer hold out at the second stage of an invited revision for Nature on our initial work – and a reviewer rate the first iteration of our NSF proposal that funded the current work as "poor” (just what a new assistant professor needs to receive; the death knell!).

So, I picked up the phone and called a stranger. Andy Clarke is a retired marine zoologist working with the British Antarctic Survey, and had been writing critiques of metabolic scaling theory in terms of the evolutionary implausibility of the temperature term. Andy generously explained the evolutionary trade-offs. He then directed me to the temperature chapter in Hochachka & Somero’s 2002 definitive text on evolutionary physiology. Back then, nobody engaged in the debate about soil respiration responses to warming appeared aware of that book (i.e. nobody had cited it in our field).

The debate has moved on. There is overwhelming evidence that microbial community responses can strongly affect decomposition dynamics. The hot-button question is whether these microbial responses will enhance or mitigate the temperature sensitivity of soil respiration. We find strong evidence for the latter, with partial compensation of mass-specific respiration rates as seen in plants, animals and cultured microbes. I was unexcited, however, about publishing these findings. I felt we needed to advance beyond the compensation debate, but I could not see how one more paper would achieve that.

Enter Marina Dacal. A Spanish doctoral student with a former lab-mate of mine (Fernando Maestre) and a joint colleague (Pablo García-Palacios). Marina had data from global drylands from an experiment we’d planned a couple of years earlier. She worked diligently and creatively to analyze and write-up these data during a brief stint with my group at Yale. She also found strong evidence for partial compensation across a very different set of ecosystems (and her paper is published alongside ours!).

With two, large independent datasets it made sense to co-submit the papers in the hope that we could provide enough evidence to move the debate forward. If I had a magic wand, I’d move forward through two actions. First, I’d ban people from using our results – or the results from similar studies – to jump to conclusions about whether we’re likely to see strong vs. weak soil carbon-climate feedbacks. Instead (and I guess my second wish for action), I’d insist we use such datasets/ insights to test the assumptions we make in soil biogeochemical models. I believe that doing so will build confidence in the knowledge represented within these models. That confidence allows policy makers the latitude to consider model projections when negotiating allowable emissions to meet climate goals. 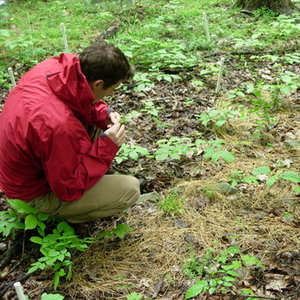