Decoding shark genomes - why did we choose those species?

When I first dreamed of having whole shark genome sequences for my analysis, probably in 2005, I actually did not imagine that shark genomes so long remained unexplored. While recognizing possible difficulties that might have trapped other challenges, my team started sequencing shark genomes some time in 2013, carefully and slowly, along with many other projects undertaken at the in-house facility that I was and am still managing in person.

If you know of the species Callorhinchus milii, you may think that shark genomics is pretty much done. But, hold on! Whereas this species is often referred to as elephant ‘shark’ (or ghost ‘shark’), it belongs to Holocephali, a distinct taxonomic group from Elasmobranchii which contains true sharks. For elasmobranchs, no reliable genome-wide sequence resource allowing extensive molecular analyses has been established to date.

Among hundreds of shark species, we first chose an egg-laying species Scyliorhinus torazame (cloudy catshark) to assist a neighboring research group that rears this species for harvesting embryos and use them in their evo-devo studies (example). For your possible interest, 'tora' means tiger, and 'zame' means shark in Japanese. Adults of this species grow up to 50 centimeters in length, and females lay quite a few eggs. Seemingly, this compact, highly fecund species was the best study target, but it turned out later that its genome size is almost 7 gigabases, more than double of ours.

When we became discouraged by the difficulty in sequencing and assembling the S. torazame genome possibly due to its large genome size, I learned about the genome project of Rhincodon typus (whale shark), the largest living fish, ongoing in the US. The interim product of this project was later published, and we downloaded raw short reads in the public domain and assembled them (see quality comparison). Without any tissue material, we got an improved genome assembly of this inaccessible species. This additional resource really helped us cross-check what we found in the two other species in the end. In early 2017, I visited Atlanta to meet chief researchers who generated the first-ever genome sequence data for the whale shark. It was truly insightful to discuss future directions with them.

The third species Chiloscyllium punctatum (brownbanded bamboo shark; see the picture above) was included in our list in late 2015 after I heard from Osaka Aquarium Kaiyukan, our collaborator, that this species lays more eggs than they can rear at the aquarium. We got its first draft genome assembly in mid-2016, which achieved a much higher sequence continuity than that of the first two species. Sometimes, success in whole genome sequencing depends on luck, in addition to laboratory and computational skills - some genomes are easier to sequence and assemble even with comparable or even larger genome sizes. This species grows to over one meter long, making rearing this species in research laboratories difficult, but it develops faster than S. torazame, according to our original developmental staging. The fast development is an obvious advantage in operational experiments like surgical operation and pharmacological treatment during development - this has been a hurdle in developmental biology of elasmobranchs.

To facilitate the access to sequence information produced in our study, my team have launched the archiving site Squalomix serving sequence files and similarity searches. We are already working on improving the sequence assemblies of these species by incorporating chromatin contact data.

I hope that our product will fuel diverse studies tackling the mysterious lives of sharks and rays. 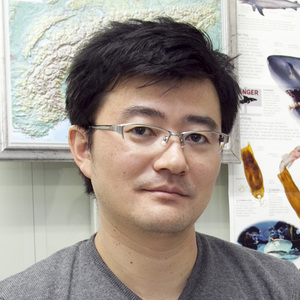 Born in 1976 in Nara, Japan. Graduated from Faculty of Science, Kyoto University. After a 5-year-long Assistant Professorship at the University of Konstanz, Germany till 2012, he is working as a Principal Investigator in RIKEN Kobe, Japan. He conducts various studies in molecular evolution, developmental biology, and genome informatics, while supervising a DNA sequencing and genome informatics core facility.
Follow