#L13 - The earliest drawing sheds light on the origin of symbolism

In our recent paper in Nature we describe the earliest known instance of an abstract drawing. Here we give a bit of background to what the study entailed. Written by Karen L. van Niekerk and Francesco d'Errico. Banner image courtesy of Craig Foster

The movies could make one believe that being an archaeologist entails non-stop action, adventure, bullwhips, fedoras and the odd dangerous animal. While we do experience some or all of these on any given field trip/excavation, the reality is that most archaeological work entails meticulous, and at times, dare I say it, boring work in the lab.

But the ‘boring’ side can sometimes bring the best surprises, as Luca Pollarolo experienced while working his way through thousands of stone flakes painstakingly excavated from 73 000 year old layers of Blombos Cave in the southern Cape of South Africa. While rinsing a particularly dusty batch of flakes in the Wits satellite laboratory on a hot summers day in Cape Town, he discovered a small silcrete flake with a criss-cross pattern of nine thin reddish lines on its surface, something he had not come across before in an assemblage of this age. The flake was allocated an accession number, G7bCCC-L13, or L13 for short.

Blombos Cave has been excavated by two of us, Christopher Henshilwood and Karen van Niekerk, since 1991, and contains material dating from 100 000 – 70 000 years ago, a time period referred to as the Middle Stone Age, as well as younger, Later Stone Age material dating from 2000 – 300 years ago. Christopher holds a Research Chair at the University of Witwatersrand in South Africa, and is the Director of a newly granted Centre of Excellence at the University of Bergen, Centre for Early Sapiens Behaviour (SapienCE), and Karen a Principal Investigator at SapienCE.

We had many questions about L13 - were these lines natural, a part of the matrix of the rock, or were they, perhaps, made by humans living in Blombos Cave 73 thousand years ago? If humans made the lines, how did they make them? And why? We were faced with an unprecedented methodological challenge. Thus began L13’s journey across two continents to unlock the secrets held for 73 000 years in a small cave in Africa.

We took L13 to our colleague Francesco d’Errico at the CNRS-PACEA lab of the University of Bordeaux, France, with whom we have successfully collaborated for many years on many projects, and who is part of our SapienCE team at the University of Bergen. Together we began to devise a systematic approach to answering the questions that L13 posed.

The next step was to determine how the ochre was applied to the stone. Was it painted on? We know that people at Blombos Cave were making an ochre rich liquid, possibly used as paint, as far back as 100 thousand years ago, so it was plausible that these lines were painted. We experimented by mixing ochre powder with water to various viscosities, and painted lines on silcrete flakes that we found leaching out of ancient layers outside Blombos Cave. We then gently rinsed the flakes under running water to mimic the rinsing of L13 during analysis. We also drew lines on these silcrete flakes with ochre crayons of different thicknesses, and then rinsed these flakes. When these experimental pieces were examined under the microscope, it became clear that the lines on L13 were drawn with an ochre crayon, and not painted.

During analysis, we noticed that the surface on which the lines were drawn on looked particularly smooth and slightly curved relative to the other surfaces. To investigate this further, Alain Queffelec, also at Bordeaux, used a confocal microscope to analyse the roughness of all surfaces of L13, as well as on the knapped and cortical surfaces of the silcrete flakes used in the experiments. The results, coupled with areal fractal analysis, show that the surface with the drawn lines is in fact significantly smoother than the other measured surfaces, and this smoothness cannot be due to natural processes. This, along with the presence of microscopic traces of ochre on the surface (outside of the lines), clearly showed that L13 was flaked from a grindstone that was used to grind ochre, before the drawing was made. As the lines on L13 are truncated, the original drawing must have extended over a larger area of the grindstone, although we have not yet found the other parts of the grindstone.

L13 is safely back in South Africa, and, after several brainstorming and writing sessions in Cape Town, Bordeaux and Bergen, we can finally present this remarkable find to the world.

But what does it mean? Symbols are an inherent part of our humanity. They can be inscribed on our bodies in the form of tattoos and scarifications or cover them through the application of particular clothing, ornaments and the way we dress our hair. Language, writing, mathematics, religion, laws could not possibly exist without the typically human capacity to master the creation and transmission of symbols and our ability to embody them in material culture. Substantial progress was made in understanding how our brain perceives and processes different categories of symbols but our knowledge on how and when symbols permanently permeated the culture of our ancestors is still imprecise and speculative. Although abstract and figurative representations are generally considered conclusive indicators of the use of symbols, it has been argued that assessing the symbolic dimension of the earliest possible graphisms is tricky. What we perceive as representations may have been produced without a precise purpose in mind, as with “doodling” or be icons, denoting an object by resemblance, rather than symbols, i.e. marks or signs understood as representing ideas or objects by a known code.

For long Palaeolithic archaeologists were convinced that unambiguous symbols first appeared when Homo sapiens entered the European territories, 40,000 years ago, and replaced local Neanderthals. Recent archaeological discoveries in Africa, Europe and Asia, in which members of our team have often participated, support a much earlier emergence for the production and use of symbols. The earliest known engraving, a zig-zag incised on a fresh water shell from Trinil, Java, was found in layers dated to 540 00 years ago and a recent article has proposed that painted representations in three caves of the Iberian peninsula were 64,000 years old and therefore produced by Neanderthals.

Our results indicate that the lines on L13 have been deliberately drawn with a pointed ochre pencil, which makes this pattern the earliest known drawing, preceding by at least 30,000 years previous examples. But there is more. The archaeological layer in which L13 was found has yielded other indicators of symbolic thinking such as shell beads covered with ochre, and, more importantly, pieces of ochres engraved with abstract patterns. Some of these engravings closely resemble the one drawn on the silcrete flake, L13. This demonstrates that early Homo sapiens in the southern Cape used different techniques to produce similar signs on different media. This observation supports the hypothesis that these signs were symbolic in nature and represented an inherent aspect of the spiritual world of these African Homo sapiens. 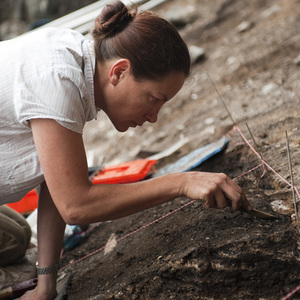